Plus 10 years since Hurricane Katrina, Ellen Page vs. Ted Cruz, and inside Broad City’s wardrobe. 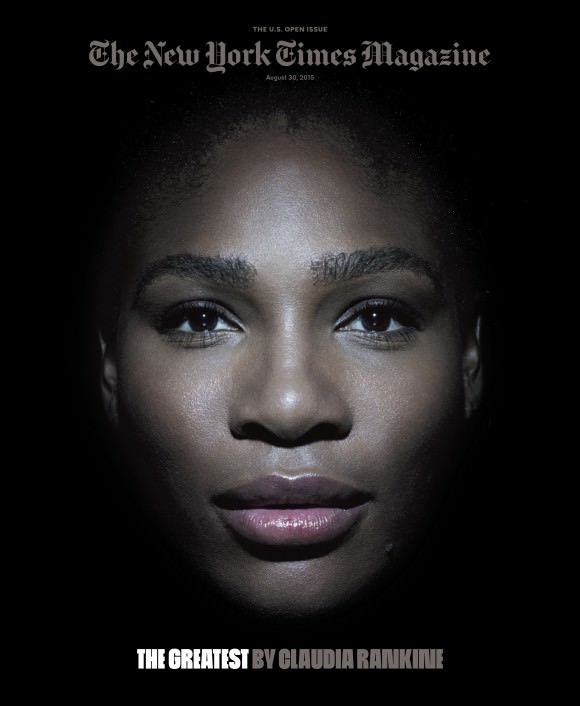 Photo of Serena Williams, by Christopher Griffith via the New York Times magazine.

The poet Claudia Rankine has written a beautiful essay about the tennis champion Serena Williams for the New York Times Magazine, and Rankine’s words on Williams’ excellence, her superlative career, and the racism that she has faced on and off the court are so powerful that I don’t want to dull them by paraphrasing. Here is one section:

Imagine you have won 21 Grand Slam singles titles, with only four losses in your 25 appearances in the finals. Imagine that you’ve achieved two “Serena Slams” (four consecutive Slams in a row), the first more than 10 years ago and the second this year. A win at this year’s U.S. Open would be your fifth and your first calendar-year Grand Slam—a feat last achieved by Steffi Graf in 1988, when you were just six years old. This win would also break your tie for the most U.S. Open titles in the Open era, surpassing the legendary Chris Evert, who herself has called you “a phenomenon that once every hundred years comes around.”

Imagine that you’re the player John McEnroe recently described as “the greatest player, I think, that ever lived.” Imagine that, despite all this, there were so many bad calls against you, you were given as one reason video replay needed to be used on the courts. Imagine that you have to contend with critiques of your body that perpetuate racist notions that black women are hypermasculine and unattractive. Imagine being asked to comment at a news conference before a tournament because the president of the Russian Tennis Federation, Shamil Tarpischev, has described you and your sister as “brothers” who are “scary” to look at. Imagine.

Rankine sits down with Williams to talk about tennis, and her plans for the future, and if I wasn’t already a Serena Superfan, I sure as heck would be after reading this piece.
Stephanie

10 years ago this week, Hurricane Katrina made landfall in southeastern Louisiana. It was a category three storm, and ultimately, the costliest natural disaster in United States history. At least 1,245 people died as a result of the storm, making Katrina the deadliest hurricane since 1928.

On Thursday, President Obama gave a speech in the Lower Ninth Ward of New Orleans, one of the areas of the hardest hit by the storm surge when the levees broke. As President Obama points out, Katrina was a natural disaster that “became a man-made one–a failure of government to look out for its own citizens.” The citizens that it failed the most were the ones that it was already failing. He goes on to say that even before the storm, “New Orleans had long been plagued by structural inequality that left too many people, especially poor people, especially people of color, without good jobs or affordable health care or decent housing.” In the speech, which you can listen to above, the President also praises the way people came together and the work of the government in the ongoing recovery. 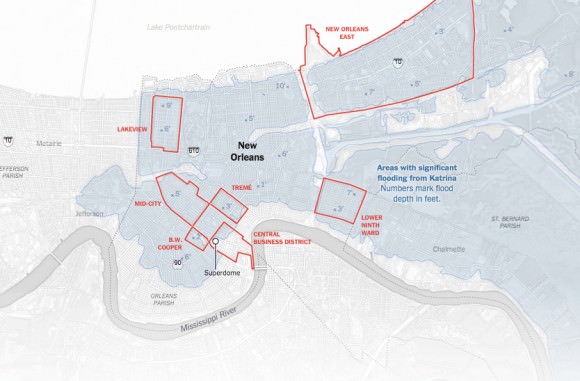 Map of New Orleans via the New York Times.

However as this article in the New York Times outlines, there is a stark racial divide in how residents view the recovery. While four out of five whites say they believe the city has recovered, three out of five black people say that it has not. The New York Times has an interactive article that pairs images from 2005 with videos from the present day and showcases many of the neighborhoods that were affected and how they have changed since the storm as well as how systems such as public housing and education have been overhauled and the way that has affected residents of New Orleans. It’s one of the most powerful overviews I’ve read on the aftermath of the storm.

For Harry Potter fans who also love gorgeous makeup: GREAT NEWS!!!! LA Splash has released a Harry Potter-inspired line of liquid lipsticks. They are bright, magical, lovely shades, and while there has been some argument about the shades, all I know is that I must have Nagini! Seriously, what a great shade of green! And Belletrix…and Severus…yeah, I want them all!
Savana 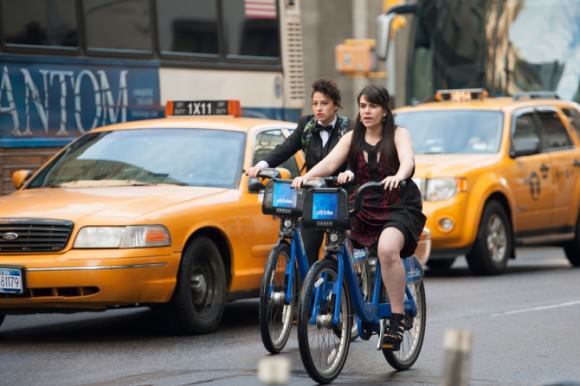 Photo by Ali Goldstein, via Stylecaster.

I’ve been anxiously waiting for new episodes of Broad City since the last season ended, so seeing this rad interview with Broad City‘s costume designer Staci Greenbaum made my heart leap. Abbi and Ilana’s fashion choices always seem to fit their personalities so perfectly, so insight into how Greenbaum styles them is super inspiring!
Marie 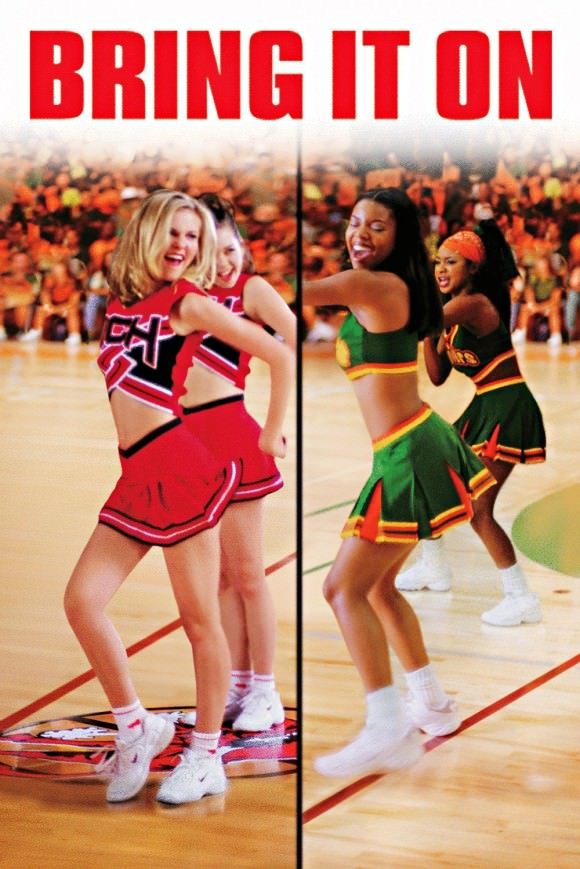 If you’ve ever seen Bring It On—the comedy about a newly-crowned cheerleading captain named who has to quickly invent a new routine with her team after she discovers their first was stolen—you might agree that it’s one of the funniest teen movies ever made. The film turned 15 this past week and celebrations were abundant, including this very special one from MTV.

Each cast member of Bring It On was asked what they thought their character would be up to over a decade later. Kirsten Dunst, who played squad leader Torrance, thinks her character would probably be working for the U.N., while Gabrielle Union believes Isis would be a total Twitter warrior. The rebellious new girl Missy would be running beauty pageants in women’s prisons, according to Eliza Dushku. This piece is a very funny read made me wish the cast would do a reunion!
Alyson 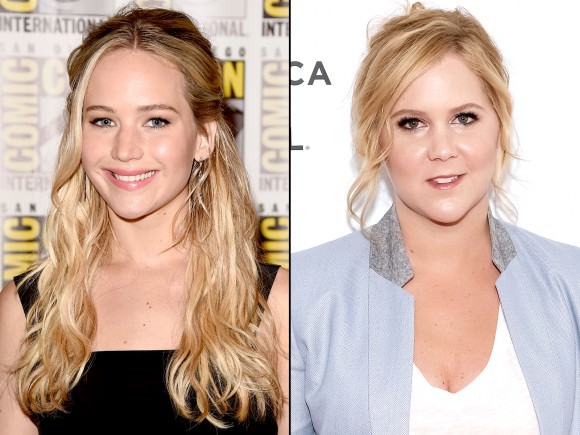 I love when two of my favorite people collaborate. In this case, Amy Schumer and Jennifer Lawrence are writing a movie together. According to the New York Times, they will both star in their movie…as sisters! I cant wait to see this meshing of their glorious talents.

The actress and LGBTQ activist Ellen Page paid a Republican presidential candidate Ted Cruz a visit at a BBQ in Iowa. Outspoken against gay marriage, it would seem that Cruz has met his match in this minutes-long debate with Page.
Arabelle 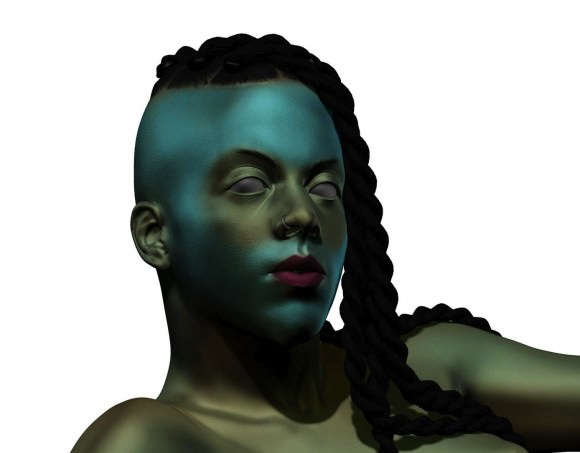 I’m a huge fan of this piece in which Gabrielle Bellot discusses beauty as a survival mechanism for trans women of color, and illuminates the risks and concerns that beauty entails. Bellot explores the policing of feminine identity in a really profound way. More of this! More of this always!
Dylan 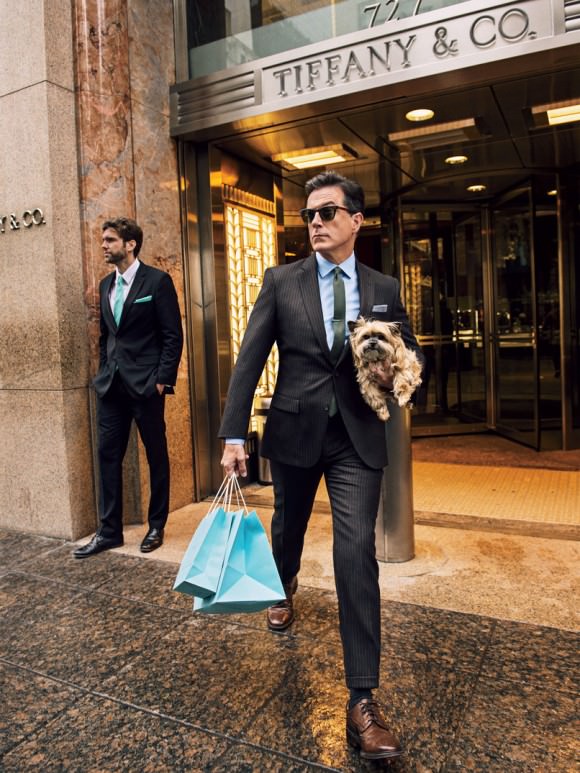 GQ magazine’s October cover story is a profile of the late night king-to-be, Stephen Colbert. It catches up with him as he transitions between his Comedy Central show, Colbert Report, to his quickly approaching role as the new Late Show host. The piece provides a stunning breadth of soulful reflections on and insights into Colbert’s mind—touching on trauma, grace, ​craft, and ​mysticism:

“Tolkien says​…​‘What punishments of God are not gifts?’” Colbert knocked his knuckles on the table. “‘What punishments of God are not gifts?’” he said again. His eyes were filled with tears. “So it would be ungrateful not to take everything with gratitude. It doesn’t mean you want it. I can hold both of those ideas in my head.”

​Colbert’s sincerity, multiplicity, ​and ​his triumph over devastating childhood pain, as revealed in this profile, has stuck with me all week.
Meagan

@jesshopp Having people insinuate that I was sleeping with someone in order to get an internship at a record label (I wasn't).

Jessica Hopper, the editor in chief of The Pitchfork Review asked women and non-binary people in the music industry to describe moments in which they felt they “didn’t count.” Replies from music writers, performers, public relations reps, tour managers, photographers, and fans, came cascading in, as people recounted their experiences dealing with micro- and macro-aggressions while simply trying to exist in the music world. The experiences range from constant devaluation of skills to sexual assault by editors, musicians, and executives. The music world can and must do better to ensure that marginalized people aren’t driven out from within it. As Hopper notes, “Imagine how many women, queer kids, POC might stick around scenes, industry, journalism if they encountered support not hostility.” 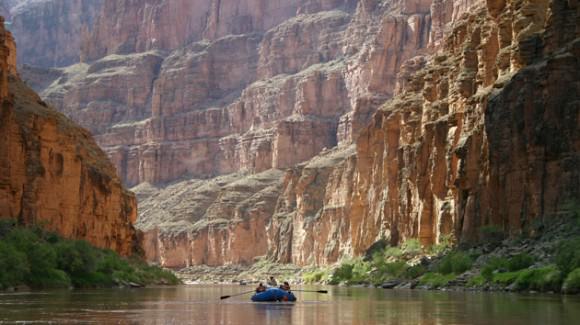 Photo of the Grand Canyon National Park, via Mother Jones.

This may be the funniest thing I’ve read in days, nay, WEEKS. Mother Jones has compiled a list of one-star Yelp reviews of national parks. You know, places of majestic natural beauty?! The unintentionally hilarious reviews pan some of the world’s most stunning places by complaining about the lack of parking spaces, crowds, and, perhaps most absurdly, being underwhelmed by the scenery.

The folk musician Weyes Blood released her single “Cardamom,” from her forthcoming EP Cardamom Times. Weyes Blood’s music has such a distinct yearning quality. This is a gorgeous song to usher in the autumn breeze.
Naomi 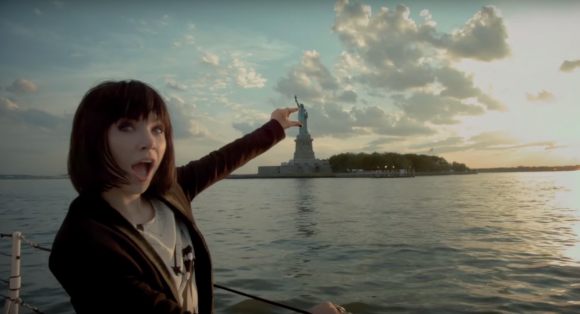 Photo of Carly Rae Jepsen, via the Awl.

One of the best things I’ve read on this internet this YEAR, is Jia Tolentino’s piece on Carly Rae Jepsen’s new album Emotion. I never thought I’d see pop music, let alone Carly Rae Jepsen written about in the same context as “totiptency” (a word I hadn’t heard until this article). But it makes absolute sense, profound sense, even. I have always been drawn to Jepsen’s music, but didn’t really know why, or didn’t even think to think why. Tolentino goes deep on the very core of Jepsen’s anonymous love songs, comparing them to the “philosopher Simone Weil’s idea of self-erasure.” This is my favourite kind of pop music criticism. ♦