Hark! An excellent new song enters the world, and its creator extols the merits of imperfection.

How to Speak Teen 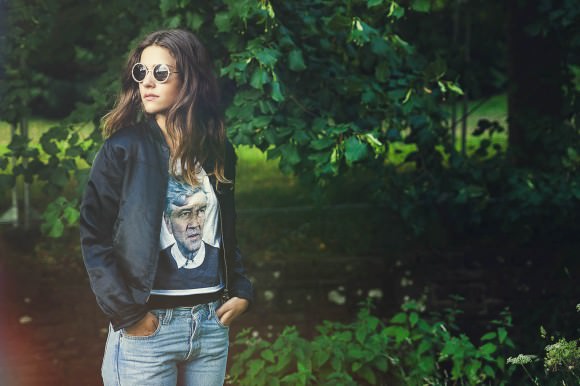 The Berlin-based, Norwegian-born musician Farao, seems to have a hundred busy hands weaving together layered textures to create her music’s opulent sound. When we spoke over the phone—across a dozen or so time zones—I learned that in fact, she has only two hands, but she has given them permission to admit imperfection: that’s what make her work tactile and true. Catch our premiere of “TIAF” from her upcoming album Till It’s All Forgotten:

Farao shared her philosophy on making and studying music, and discussed the cinematic inspiration for this ruminative song.

DYLAN: You come from a very small town in Norway, and moved to Copenhagen when you were 19, right? Then you lived in London, and now I’m calling you in Berlin. Between your small hometown and these big European cities where you work, what are the creative tradeoffs for you?

FARAO: At home, I learned how to do everything myself, through having to do everything myself—it’s really a very good quality! So later, when I lived in London or was recording in Iceland, I wasn’t just sitting around and waiting for things to happen for me. I just do it myself and get the wheels in motion on my own. I guess I learned that from having to do it in my hometown. I didn’t have anyone else to do things for me or with me.

How did you get started with your music career?

I moved away to school to study music for one year at a school where all [the students] lived there—100 people living on site. Everyone was just there all the time. I really didn’t have to go out and look for anyone, everyone was there for each other, which was really great. We played in bands for a year and had fun. It was probably one of the most fun years of my life.

What were your takeaways from studying music formally?

I don’t really think you can learn music from anyone other than yourself. I’m not really a big fan of learning other people’s ways of playing an instrument, or any other person’s musicality. I wanted to do it my own way and learn it myself. I never had instrument lessons or anything, and I probably have really bad technique, but at least everybody tells me that I have my own style, which is important. I never learned that from anyone else. I also felt like you spend your whole education training to be a part of something, when it’s there all along, why not just go be a part of it now? Teachers can teach you guitar scales and the technical skills of writing music, but the only person who can show you how to write your own music is you.

You’ve said that Eternal Sunshine of the Spotless Mind is one of your favorite films. What about that movie got to you?

I was inspired by the fact that, although it was kind of selfish of Clementine in the film, she went and deleted Joel from her life. When writing this song, I wasn’t happy where I was. I needed to do something about it; I’m not just going to complain and do nothing, I’m gonna get myself out of it. That [movie] inspired me to do the same, to take responsibility for myself.

Deleting someone from your life is kind of a fantasy everyone kind of has at some point.

If we could actually do that, it would be so cool, but horrible at the same time! You need to remember the bad stuff in life as well.

You want to be able to believe something didn’t happen, it was just nightmare from which you can wake up.

Sometimes, you want to turn someone back into a stranger. That’s what I tried to do when writing this track.

Are you a perfectionist when writing your music?

I’m not a perfectionist but a control freak. I really don’t like everything being perfect, actually, because then it’s not human anymore. I need to be able to hear that the music is made by a human being. If you take away all of the mistakes and intricate human details it’s harder for me to connect with it, I guess. I really like hearing mistakes, not mistakes, just the random stuff that happens when you record. Maybe something falls to the floor when you do a take and you end up keeping the sound, or someone is talking in the background and didn’t know they had to shut up. Really random details that weren’t planned at all, that makes recording alive for me.

“Alive” is just what I was thinking as you were talking about this quality of the music. Maybe sound that is less of a static capsule and more of a thing that is breathing?

Well, actually, a capsule in that it captures exactly what happened and not just what you what to show of what happened. It shows the human side of the music. I only usually like to record in three or four takes, otherwise I sort of lose those qualities. For instance, I was playing around with a trumpet sound in the studio, on this little synthesizer thing, laughing with the producer, like, “Look at this little thing I did,” and we thought it sounded cool and I popped it in the end of “Hunter.” It’s not like I don’t take myself seriously, because I take my music seriously, but not so seriously that I don’t let myself play around like that. That’s very important to my music. ♦