Where the Girls Aren’t

An excerpt from the new book The First Collection of Criticism by a Living Female Rock Critic.

How to Make a Paper-Flower Chandelier 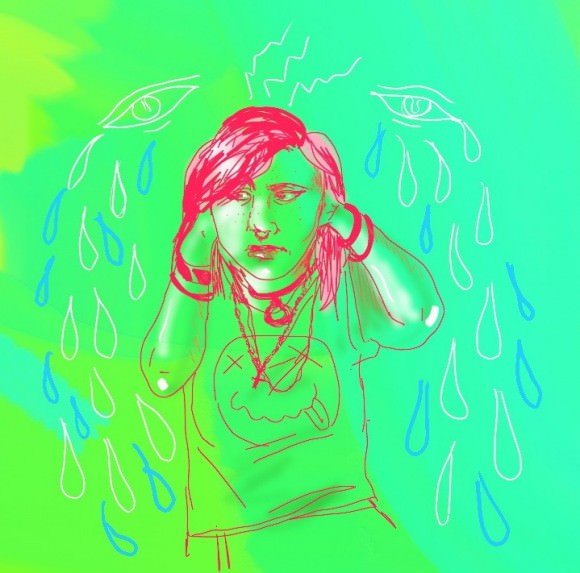 A few months back, I was at a Strike Anywhere show. The band launched into “Refusal,” a song that offers solidarity with the feminist movement and bears witness to the struggles inherent to women’s lives. It is not a song of protection, there is no romantic undertow, it’s just about all people being equally important. Everyone was dancing, fanboys and girls at the lip of the stage screaming along—like so many shows at the Fireside. By the first chorus of the song, I was in tears with a sudden awareness: I’ve been going to three shows a week for the last decade and the number of times I’ve heard women’s reality acknowledged or portrayed in a song sung by male-fronted band was at zero and holding. This song was the first.

It’s no wonder why my girlfriends and I have grown increasingly alienated and distanced from the scene, or have begun taking shelter from emo’s pervasive stronghold in the recesses of electronic, DJ, or experimental music. No wonder girls I know are feeling dismissive and faithless toward music. No wonder I feel much more allegiance to M.O.P.’s “Ante Up” than any song by an all-dude band about the singer’s romantic holocaust. Because as it stands in 2003, I simply cannot substantiate the effort it takes to give a flying fuck about the genre/plague that we know as emo songs that don’t consider the world beyond boy bodies, their broken hearts or their vans. Meanwhile, we’re left wondering—how did we get here?

As hardcore and political punk’s charged sentiments became more cliché toward the end of the ’80s and we all began slipping to into the armchair comfort of the Clinton era—punk stopped looking outward and began stripping off its tough skin only and examine its squishy heart instead, forsaking songs about the impact of trickle down economics for ones about elusive kisses. Mixtapes across America became laden with relational eulogies—hopeful boys with their hearts masted to sleeves, their pillows soaked in tears. Punk’s songs became personal, often myopically so.

Perhaps we lost the map, or simply stopped consulting it. There was a time when emo seemed reasonable, encouraging, exciting—revivifying in its earnestness and personal stakes. These new bands modeled themselves on bands we all liked: Jawbox, Jawbreaker, Sunny Day Real Estate. The difference was, in those bands’ songs about women, the girls had names, details to their lives. Jawbox’s most popular song, “Savory,” was about recognizing male normative privilege, about the weight of objectification on a woman (“See you feign surprise / That I’m all eyes”). In Jawbreaker songs, women had leverage, had life, had animus and agency to them. Sometimes they were friends, or a sister, not always a girl to be bedded or dumped by. They were unidealized, realistic characters.

And then something broke—and not just Mr. Dashboard’s sensitive heart. Records by a legion of romantically-wronged boys suddenly lined the record store shelves. Every record was seemingly a concept album about a breakup, damning the girl on the other side. Emo’s contentious monologues—these balled fist Peter Pan mash-note dilemmas—have now gone from being descriptive to being prescriptive. Emo has become another forum where women were locked out, observing ourselves through the eyes of others.

Girls in emo songs today do not have names. We are not identified beyond our absence, our shape drawn by the pain we’ve caused. Our lives, our day-to-day-to-day does not exist, we do not get colored in. Our actions are portrayed solely through the detailing of neurotic self-entanglement of the boy singer—our region of personal power, simply, is our impact on his romantic life. We’re vessels redeemed in the light of boy-love. On a pedestal, on our backs. Muses at best. Cum rags or invisible at worst. Check out our pictures on the covers of records—we are sad-eyed and winsome and comely (thank you Hot Rod Circuit, The Crush, Cursive, Something Corporate, et al.)—the fantasy girl you could take home and comfort.

It’s evident from these bands’ lyrics and shared aesthetic that their knowledge of actual living, breathing women is notional at best. Emo’s characteristic vulnerabile front is limited to self-sensitivity, every song a high stakes game of control that involves “winning” or “losing” possession of the girl (see Dashboard Confessional, Brand New, New Found Glory, and Glassjaw albums for prime examples). Yet, in the vulnerability there is no empathy, no peerage or parallelism. Emo’s yearning doesn’t connect it with women—it omits them.

As Andy Greenwald notes in his book about emo culture, Nothing Feels Good: Punk Rock, Teenagers, and Emo, lyrically, emo singers “revel in their misery and suffering to an almost ecstatic degree, but with a limited use of subtlety and language. It tends to come off like Rimbaud relocated to the Food Court.” Women in emo songs are denied the dignity of humanization through both the language and narratives, we are omnipresent yet chimerical, only of consequence in romantic settings.