Syron: All I Need

A song premiere and interview with the proud Southeast Londoner. 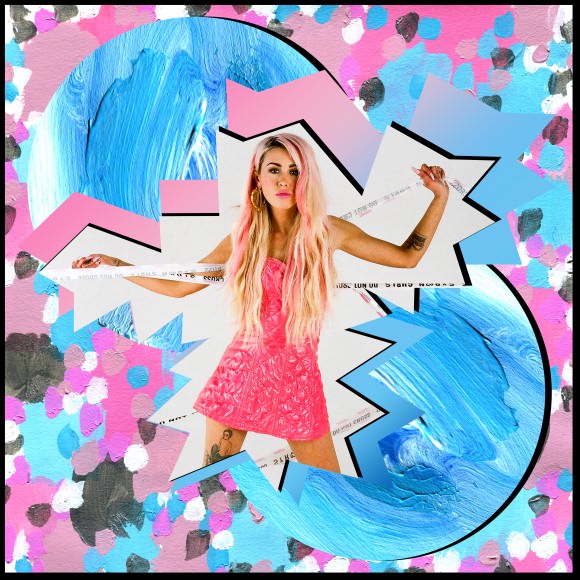 Collage by Minna from a photo by Riya Hollings.

Thanks to her style and her UK underground beats, Syron lets you know immediately that she was born and raised in Southeast London. The singer, named Daisy Syron-Russell, first released mixtapes in 2012, which led to a debut single, aptly called “Breaking.” Since then, Syron’s blended R&B-like vocals with dance melodies to create memorable hooks that tell different stories about her life. This year, she’s already released the single “All I Need,” which as you’ll find out, is much more than a banger—we’ve got an acoustic a cappella version for you right here, right now!

A couple of weeks ago, I chatted with Syron about the people who influence her as an artist (hello, Alicia Keys!), Tumblr, and her ability to stay true to herself.

CHANEL: Hi! So excited to talk to you today. First off: What’s the story behind the single “All I Need?”

I’d left a boyfriend behind in London and planned to go to L.A. for two weeks, and I ended up staying there for three months. So it’s about missing somebody—mainly, missing them in the night. It wasn’t until a year later I came back and listened to all of the stuff I’d made and realized that I really liked this song. I emailed with the producers, and I got it to sound more current and more UK underground, production-wise. Then we put it out!

How did going to L.A. inspire you to write music—what did it mean for you to go away to do something creatively different?

That independence makes me think of dance songs that usually have titles like, “This producer, featuring this singer.” You have songs on your own, and it’s refreshing to hear a woman in this landscape have her own things going on. Can you speak to that?

I wouldn’t be opposed to different features, because it’s always great to work with people. But if it is a feature, it does often sound like “a feature.”

Whenever I start a song, I know in my head exactly how I want it to sound. When I work with producers there are times when I want to have their input but the songs are for me, so it’s got to sound like [my way] in the end.

I stalked your Tumblr, and I think it’s really cool how you give advice on beauty and relationships to your listeners. How has your connection to your audience grown since you started out?

There was a period when I was just writing and not putting [music] out, so it’s nice to know people are staying with me the whole time. With my Tumblr, there’s an Ask Anything and sometimes there’s weird stuff, but I answer everything that comes. I always want to give any advice I can.

What have you learned from them?

Comments on videos, Instagram, and stuff have always been positive. You do see lot of artists that sign to major labels and become someone that they weren’t prior to or they have to then be a certain thing or be a certain way. I’ve always had positive comments that make me feel like I shouldn’t have to do that, which is really nice.

That’s funny that you say that, because a couple of days ago, I read about how Katy Perry said everyone in pop has a persona. But you have your own style and you’ve cultivated your style of music, clothing, and beauty. Can you talk about your influences behind that?

Speaking of what you listen to, you’ve mentioned that you’re influenced by P!nk’s album M!ssundaztood and Alicia Keys’s Songs In A Minor. What’s your musical journey from what you listened to, to what you make now?

M!ssundaztood is still one of my favorite albums. Every time I hear it now, I still remember every single word to every song, and I remember being with my friends at nine or 10 years old, singing along to all the words, and doing dances and stuff. The Alicia Keys album is the first album where I wanted to imitate how someone sounded. I loved everything about her voice and the way she sang.

There was also a girl band called Mis-Teeq. I don’t know if they were big worldwide, but they were big in the UK. It’s three girls and they mix a UK dance, garage kind of sound with an almost Destiny’s Child pop-vocal sound. They were the first people I saw live, so their girly vocals mixed with a dance kind of thing is still a big reference for my music.

Can you talk about the experience of performing live versus seeing somebody live?

Seeing something live, no matter what it is, I always get that feeling of, Aw, I wish I was on stage. I’m fine watching people on stage, but it’s when I look at the audience and the audience’s reactions, I get super like, I want that to be me!

I love seeing people live. I think it is important to see lots of people live because you can always take reference of how they speak to the audience and how they come across.

You went to a performing arts school, the BRIT School for Performing Arts & Technology. How was that experience?

I did musical theater, so I did dancing, singing, and acting. It is a bit like the movie Fame. [Laughs] There are people prancing around and singing with guitars in their arms and stuff. It’s really good: They teach you a lot about how to be yourself as a performer and how to have a presence on stage.

One of the main things is acting through the song, which is something I’ve always thought about. If you write a song at a point in your life when you’re really sad or really angry, and then you get on stage [later], you want to be able to still portray how you felt when you wrote it. That was one of the main things that they taught a lot of at school, and I’ve tried to keep that in what I do now.

What is the process behind your songwriting?

All of my songs are about actual things that have happened to me in my life because that’s what I know about. Either producers will send me a beat or I’ll go to the studio and they’ve already made the beat or the track for me. I prefer to start something from scratch.Then I’ll write super personal stuff that I’m always writing down notes about different lines, sentences, and words I want to use, then putting them into songs afterward.

You’ve been promoting “All I Need,” but what’s coming up in the future?

I’ve got a new song called “Talkin’ Crazy.” I just filmed the video for that and worked with director Michael Baldwin and it’s been crazy. I’ve got a snake in the video! ♦