An exclusive new track and a chat about putting friendship first. 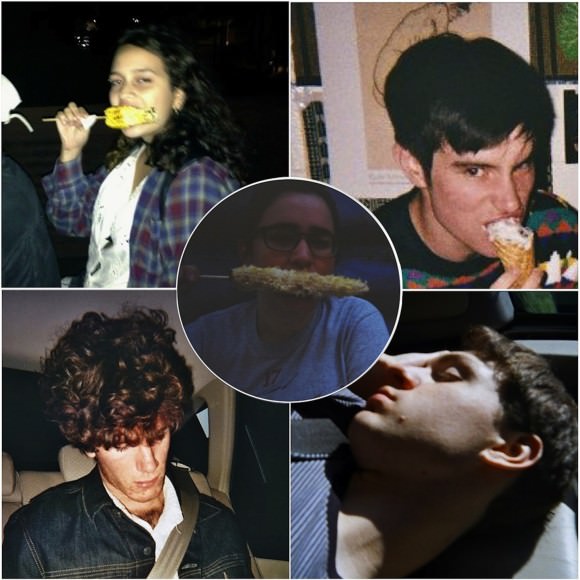 Clockwise from top left: Photo of Carmen by Rachel Gordh; Photo of Benji by Alivia Bloch; Photos of Jack, James, and Catherine (center) by Carmen Perry.

The Ohio band Sports describe themselves as “friends FIRST, band SECOND.” Carmen, Benji, James, Jack, and Catherine met in college, and for lead singer Carmen, the band and their friendship has been the best thing to come out of that experience.

Following 2014’s wildly amazing album Sunchokes, Sports are releasing the even better follow-up, All of Something on Father/Daughter Records this October. We’re stoked to premiere the song “The Washing Machine” right here:

I spoke to Carmen about Sports’ forthcoming album, fictional bands from movies, and friendship.

BRITTANY: I noticed that a lyric on “The Washing Machine” was also on the track “Tiny Planets” off your album Sunchokes.

CARMEN: That was a little bit subconscious. Originally I meant [to use the lyric] as a placeholder and change it later, but then I kind of liked the connection it made to “Tiny Planets.” The idea behind “Washing Machine” is—when the things you idealize and daydream about actually turn into real things [sometimes] you’re not sure the things you wanted originally are what you want once you actually have them. You have to, sort of, change the way you think.

Do you write Sports’ songs on your own or with your bandmates?

On Sunchokes, I wrote all of [the songs] except for one that Benji the drummer wrote. On All of Something, it was a little bit more collaborative. For two of the songs, Benji wrote the music and I wrote the lyrics. One of the songs Jack wrote—he plays guitar. Jack wrote some of the lyrics on “Saturday.” It was nice to have everyone’s input on everything rather than it just being me.

How long have you all been playing music together?

We started playing as Sports my sophomore year of college. We were all friends to begin with and all played music. We were just looking for a way to do that together, so it worked out nicely!

What kind of music did you grow up listening to?

I really love Rilo Kiley. That’s the band I feel really made me interested in music. I liked music before, but I think Rilo Kiley got me thinking about writing music and playing music. I owe them a lot!

I actually just finished watching Freaky Friday on TV, and that song at the end, “Ultimate,” [Laughs] I loved that song as a kid. I wouldn’t call it a major influence, but I did think it was really cool. I love Josie and the Pussycats.

I can definitely hear a little Pink Slip in your sound.

Movie bands definitely had an impact on my childhood listening.

I also hear a lot of the Rilo Kiley influence you mentioned. There’s a lot of Jenny Lewis-esque storytelling and little details in your lyrics. What influences you as you write those lyrics?

I just love music and listen to it all the time. When I was in high school, it was a way for me to get out of my head—or even further into my head, I guess. Music really helped me deal with my feelings and learn how to process them. There are a lot of great songwriters who have influenced me. I’m a really big fan of Waxahatchee, and [Katie Crutchfield’s] band P.S. Eliot, which broke up a little while ago; it was her and her sister [Allison Crutchfield of Swearin’]. I went through a huge P.S. Eliot phase! A lot of my early stuff was probably just rip-offs of their stuff. Hopefully I’ve developed on my own a little bit past that! In terms of my process, I guess I just started writing songs to deal with stuff that I didn’t know how to deal with otherwise.

Do you have a favorite song of yours that you’ve written?

Not really. It’s a little weird because all my songs are really personal. I only started playing in front of other people and releasing music online after my freshmen year of college. It’s been weird making the transition from writing songs that are about really specific things and people that only I’m going to hear, to songs that a lot of people will hear and eventually piece together who or what they’re about.

You talk about making and listening to music as a form of catharsis. What else helps you power through tough times and bad feelings?

Songwriting is always the first thing, but I watch a lot of TV. I think TV and movies are a good distraction, but also being alone when you have something big to think about—dwelling on it and wallowing in it for a bit—is somewhat healthy. It can help you eventually want to start moving on from it.

What kind of advice would you give to someone looking to find that friendship bond in forming a band?

It’s been a great experience. I’ve made music for a long time, and I never really worked up the courage to do anything public about it until college. My friends were really encouraging. I don’t know if I would’ve done it if I didn’t have my friends behind me.

With Sports, we were all in school, and it gets busy and hard to see people and hang out all the time. It was a really nice way to be like “OK, we’re playing this show on Friday, so we’re all going to eat dinner together first.” For people who are interested in starting but having trouble socially with how to get there, my friends met because we had a lot of shared interests and a big one was music. Going to events and shows or even Facebook messaging a band you really like is helpful. A lot of people are really nice about stuff like that. The internet is also really helpful because it puts you in contact with people you couldn’t reach otherwise.

If Sports were a movie band, what would be the setting and plot of the movie?

I would definitely want a movie similar to Josie and the Pussycats, but I think James and Jack would want something closer to School of Rock.

Our movie would definitely be a comedy about five kids going around, playing shows, being friends and having fun! Because that’s sort of what it feels like, especially at this point in our band’s career. We weren’t really looking to do anything serious with it, so it’s been really nice that we got a little bit of attention from the last album without really trying. It’s really encouraging that people out there are listening to us and like us! ♦