Plus pictures of Pluto and power to Amandla and Serena.

Sunday Comic: On the Right Track 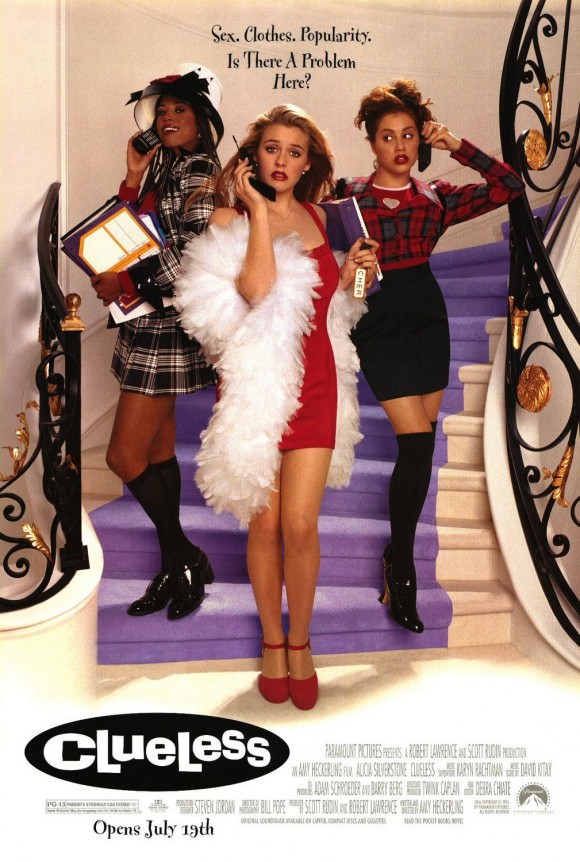 The movie Clueless celebrates the 20th anniversary of its release this weekend. It’s no surprise that there are a gazillion articles online paying tribute to this classic flick about a Beverly Hills rich girl named Cher Horowitz (Alicia Silverstone) who has a calling to help those she believes are less fortunate than her. Some of her good deeds include giving Tai (Brittany Murphy), the new girl in school, a makeover and playing matchmaker to two of her teachers. Here are my favorites of the gazillion articles. 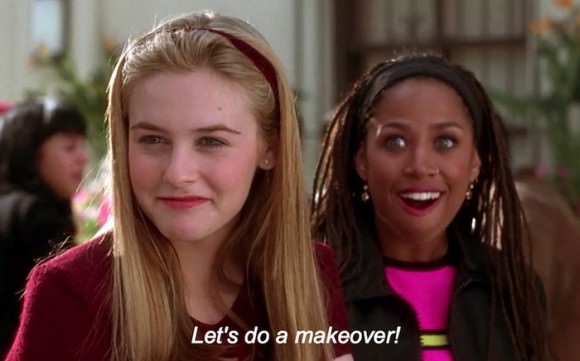 Clueless was a loose adaptation of Jane Austen’s novel, Emma, and in a video, Slate explains “Why Clueless is the Perfect Literary Teen Movie.“

NPR discuss the film’s unique vernacular and costuming. The piece points out that Cher and co.’s signature plaid skirt sets and fuzzy sweaters stood out during a time when grunge was in.

Stereogum reflects on Clueless‘s super soundtrack. Fun fact: No Doubt pretty much made their debut to the world when “Just a Girl” played during a scene in the film.

To mark this milestone, I’m heading to visit all of Clueless‘s movie’s filming locations here in Los Angeles. Make sure to celebrate, too. Try gathering all your best buds and screening the film. And I ALWAYS encourage dressing in theme.
Estelle

I’m STILL SCREAMING at this Nylon video, which shows what happened when the actor Daniel Radcliffe took over as the new Nylon office receptionist. Some visitors were VERY, VERY EXCITED, while others (JOE JONAS. I’m NOT joking) seemed not to have clocked the Harry Potter and Equus actor in his new role. Daniel doesn’t seem very good at being a receptionist tbh, but I would be bad at playing a boy wizard, so let’s not judge. 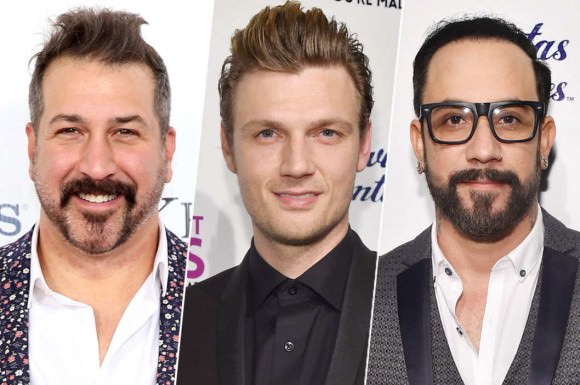 Did you know that in addition to having been a Backstreet Boy, reality-TV show star of House of Carters, and a solo recording artist, Nick Carter is also a screenwriter and director? According to New York Magazine‘s the Cut, Nick Carter has penned a zombie movie called Dead 7 for the Syfy channel, and he won’t be the only familiar face. My favorite ex-BSB, nu-rock-dad AJ McLean will also feature, as will NSYNC’s Joey Fatone. BACKSTREET’S BACK, etc.!
Tayler 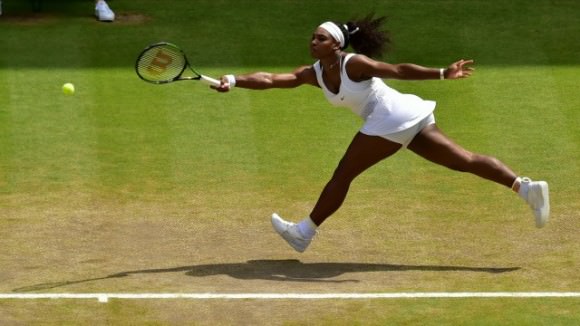 Photo of Serena Williams by Dominic Lipinski, via the Grio.

Serena Williams has dominated the press lately after she won four consecutive Grand Slams. However, the day after her Wimbledon win, the New York Times ran an article focused on Serena’s physique and teeming with negativity, racism, and sexism. The article compares Serena’s body to those of other female tennis players and quotes the coach of tennis player Agnieszka Radwanska as saying, “It’s our decision to keep her the smallest in the top 10 because first of all, she’s a woman, and she wants to be a woman.” Attacks on Serena’s appearance aren’t new and they display how narrow and white the perception of femininity continues to be. Like many other articles, this piece disregards the tennis star’s amazing athletic abilities in exchange for a racist and misogynist narrative.

This article by Tomas Rios at the Daily Beast unpacks the conversation around Serena Williams’ body with great care. The issues Serena deals with—less pay than her white mediocre counterparts—run parallel with black women in the workplace everywhere. According to the article, “The U.S. Bureau of Labor Statistics reports that black women earn $100 less per week than white women. Black women have a median wealth of $100 compared to a median wealth of $45,400 for white women, according to the Center for Global Policy Solutions.” Although Serena’s awesome sister Venus Williams has made strides in her advocacy for pay equality between men and women in tennis, there’s also a wealth disparity between black women and white women within that same sport. There’s a lot of work to be done, and the Williams’ sisters handle it all with such grace and black girl fly. Oh, and they’re also the greatest athletes of our generation.
Meagan

NASA’s New Horizons spacecraft arrived at Pluto, the outermost dwarf planet in our solar system. New Horizons left Earth nine years ago, traveled billions of miles, and finally reached Pluto, where it shot the mindboggling photo in the video above. It’s a monumental moment because it represents the last exploration of the planets in our little neighborhood. Before this mission, humans had never glimpsed Pluto, much less had a dazzling high-resolution image. When I first saw the image, I teared up a little—I thought of Ellie Arroway in Contact by Carl Sagan saying, “It reminds us how tiny and insignificant and precious we all are.” And the giant heart-shaped feature in its southern hemisphere stole my entire heart. 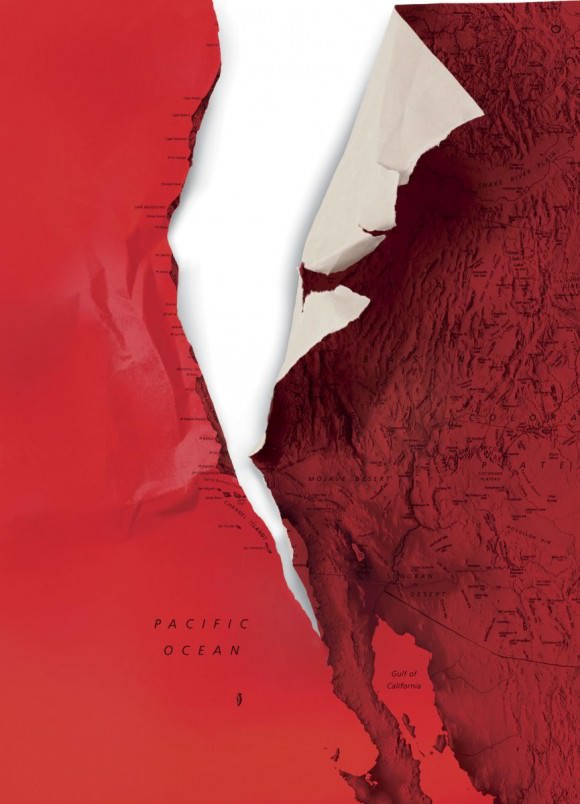 Illustration by Christoph Niemann via the New Yorker magazine.

Science also scared the shit out me this week. This long and extensively-researched article in the New Yorker reports on the prediction that a giant earthquake will hit the Pacific Northwest sometime in the next 50 years. This area is prone to earthquakes, but isn’t thought of as a danger zone in the same way as Southern California or the Pacific Islands. However, scientists believe that the Cascadia Subduction Zone will “slip,” causing a catastrophic earthquake around the 8.0 magnitude, along with a possible tsunami. Let’s hope that this time, the science is wrong, I guess?

Marissa Nadler has covered Black Sabbath’s song “Solitude.” Nadler’s version, which winds like a trail in the woods, is available as a free download on her SoundCloud account. I can’t wait for the release of her next album.

Alice Glass released a track titled “Stillbirth.” In a note on her website, the musician, formerly of the band Crystal Castles, explains that the song reflects on her experience of an emotionally and psychologically abusive relationship. She writes about being a commanding performer in public, while in private feeling helpless and trapped. All proceeds from the sale of “Stillbirth” will be donated to RAINN, an anti-sexual assault charity.
Derica 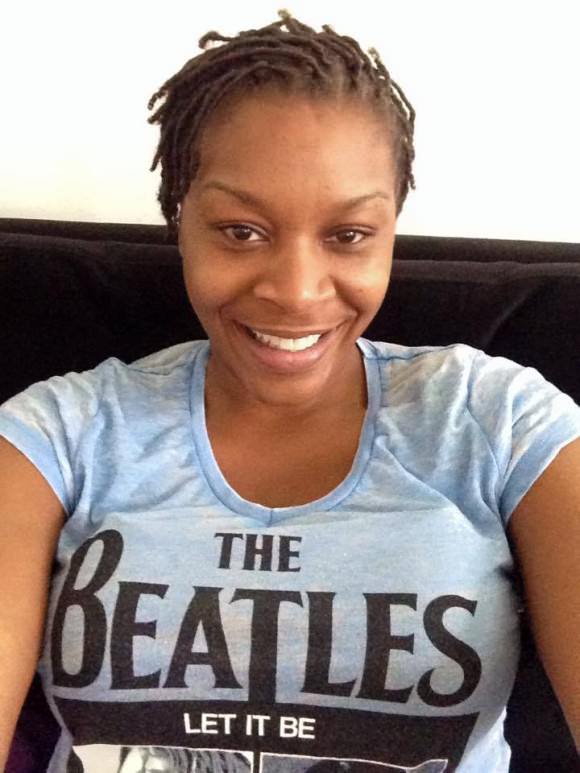 Photo of Sandra Bland, via Heavy.

I’ve been following the progress of the story surrounding the death of Sandra Bland, a 28-year-old woman who died in police custody on Monday. Although the Waller County sheriff’s office has called Bland’s death a suicide, her family is unconvinced. There is video of Bland being violently arrested at the roadside, and her family has clarified that she recently moved from Chicago to Texas to start her dream job. Some are calling for the Justice Department to take over the investigation into Bland’s death, and you can follow the hashtag #SandraBland to see how others are calling for justice. May Sandra Bland rest in peace.
Jamia 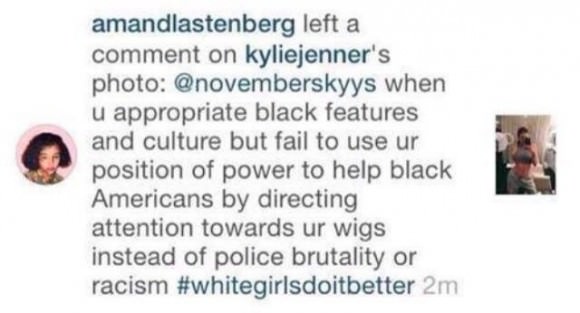 On his show Watch What Happens: Live, Cohen mocked Stenberg’s commentary while ignoring the racial inequality and cultural co-option that gives Amandla’s critique its historical context. The insult also ignored the immediate context of Stenberg’s comment—a trending white supremacist and misogynist hashtag proclaiming “#whitegirlsdoitbetter.” Instead of consulting Amandla’s very clear definition of cultural appropriation, Cohen asked guests Laverne Cox and André Leon Talley to weigh in on her comments inquiring, “White girls in cornrows? Is it OK or nay?” Later, Amandla continued the conversation and published the text pictured below to her Tumblr. 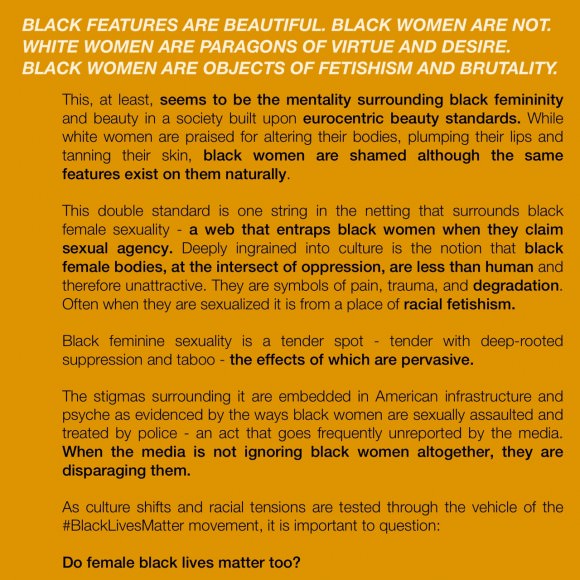 Words by Amandla Stenberg via Tumblr.

Back in 2013, I wrote about the Onion’s crass “joke” about Quvenzhané Wallis and about Amandla Stenberg being harassed for playing a heroine that some viewers thought should be white. Black girls are excessively targeted and undermined in their daily lives and in popular culture.

Following sustained pressure and the emergence of the hashtag #BoycottBravo, Andy Cohen apologized. Concurrently, Laverne Cox posted on Tumblr about cultural appropriation, and addressed her appearance on the show. ♦