I feared that moments of blankness made me a bland person. 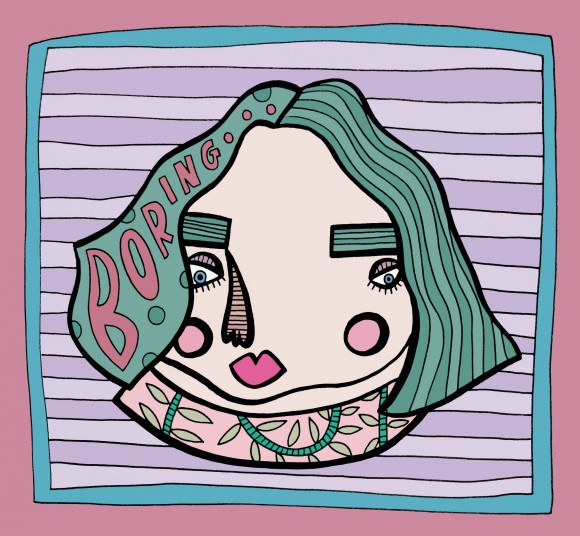 I. A DRAMATIC NIGHT IN SOHO.

I caused a scene the other night. I was at a restaurant with my boyfriend, Matt—we are approaching the five-month mark, that time when the relationship starts to get real cozy. We’ve become a unit, rarely remembering to spend a night apart; our conversational topics have expanded to include talk about indigestion and farting habits. That night, I was crampy and crabby and bloated; Matt was tired, having worked an extra-long shift at the bookstore.

The restaurant was small; the seating, tight. Matt and I sat squeezed in at a two-top that had been squeezed in between another table and that little nook where waitstaff pick up food from the kitchen. Matt faced inside, toward the nook.

I suppose it was an awkward arrangement. The table was low, so the lower half of a waiter’s body could barely resist grazing our shoulders. That natural distance where one’s eyes might rest fell directly into that little nook where the waitstaff must wait. Right? Anyhow. At some point during our conversational lull, I noticed Matt’s eyes resting…staring…into that nook, where stood this waitress: a wide-eyed blonde in a semi-sheer peasant top and flared baby-blue jeans who was sexy.

His eyes— which felt to me like they were on the verge of dribbling out of their sockets; ready to explode so hard they’d shatter the lenses of his eyeglasses—followed this waitress’s every movement.

“For fun!” I flashed him a saccharine grin.

We switched. Food arrived, and we ate it. We chatted—I don’t remember about what. What I remember is Matt’s eyes, peeping up every too often, darting around as she darted from table to table. I grew silent. I had nothing to say, anyway. Nothing that could hold his attention. I felt like a crampy, cranky, boring drip.

“So-oo…do you think there will ever be real revolutionary change in society?” Matt asked. I couldn’t read how sarcastic his tone was. The Revolution isn’t really part of our conversational repertoire.
“The future is going to be just like Mad Max,” I answered.

You know those moments when the absurdity strikes you, and feels unbearable? When everything suddenly feels far too small? A certain panic arises over your routine…the monotony…these lights are way too harsh…But don’t you know what I mean? You feel like you are watching your life on a screen, play out in slow motion around you… and it is a boring show. So empty and meaningless. You panic. You feel like a fool (I felt like a fool) for having spoken with such false animation only moments before about such dull topics. (Oooh, salmon or stir fry…who the hell cares?!) You feel like a bore (I felt like a bore) for not having some passionate topic.

Perhaps it was the “real revolutionary change” comment that got to me. What I felt was an attack, on Matt’s part, because I did not have a real meaningful topic at hand. I felt like a small talking bird, cheep! cheep!-ing away in some lame attempt to drown out the silence.

So I launched my attack. “Sometimes I think that you don’t ‘get me.’ Like, you think that in my past, I was just acting stupid and naïve.” In my past, I tried to be a hippie…and I tried to chase after a belief that a state of 150 percent pure beauty and passion could be found, and maintained, 150 percent of the time. “So maybe I was being naïve…but it’s that FEELING…that FEELING that all this”—here, I gesticulated dramatically—”twee décor, beautiful consumers, a miniature ramekin holding orange cream sauce that I’d requested ‘on the side’) is so…so BORING. So MEANINGLESS. SOHO is BORING.” Matt works in Soho, and we sometimes eat in the neighborhood, as we were doing that night. “THERE IS MORE OUT THERE. DON’T YOU GET IT? I CAN’T STAND THIS FEELING. SOMETIMES… SOMETIMES I THINK THAT YOU ARE SOHO!”

I grabbed the cloth napkin tucked under my plate, and flung the napkin onto my lap. I balled my hands into tight fists and threw Matt the nastiest stink-eye I could muster.

He calmed me down, reminding me that “this feeling” is normal. Matt is a man of whom one could say, “He has a good head on his shoulders.” At my insistence, we ordered more—a spicy papaya salad, plus two nightcaps. We ate more; we drank more; we split the bill. We walked—wiggling our way gingerly past the other guests; my eye glued to the waitress in the peasant top—outside.

Outside offered us a slightly sticky night in late spring. Matt and I stood on a quiet-ish side street, wondering what to do next. A small darkness was obscured by those lights that are never turned off, left on to illumine slender mannequins poised languidly in the windows of cute boutiques, closed for the night. A lingerie shop displayed brazen mannequins outfitted in risqué negligees and bras that did not really seem like bras. The mannequins made me feel weird. A few people huddled outside a gelateria/espresso bar and were laughing. I wished I were laughing. A few bodies hurried by, speaking in excited tones. I felt blank. I felt boring. I felt panicked. I pounced:

“I WILL NEVER BE BLONDE.”

“I WILL NEVER HAVE BLONDE HAIR. I CAN’T. MY HAIR IS TOO DARK. MY HAIR IS BROWN-BLACK. I CANNOT DYE MY HAIR—IT WOULDN’T SHOW UP.”

“Ooh, Anna,” Matt sighed. “An ex of yours once said some idiotic thing to you about ‘preferring blondes’, which you still haven’t gotten over. This has nothing to do with me. I like the color of your hair.”

“Oh, Anna,” he sighed once more. “What is the matter? Listen…I’m sorry about that waitress. I was acting piggish. I was rude. I’m really sorry. But it’s not that big of a deal. It didn’t mean anything. I want to be with you. What’s wrong? What’s going on in your head?”

I did not know. What I knew is that I had some spicy jealousy roiling around in my gut. So I shouted some more words. I balled up my hands into fists, and then…well, then I did something real shitty, something I feel bad about mentioning…I flung out my arm hard and fast, and whomped my nice boyfriend on the side of his head. I whomped him so hard his eyeglasses tumbled off.