You’ve Got to Want It: An Interview With MØ

“Sometimes it’s good to do something you’ll maybe regret later.” 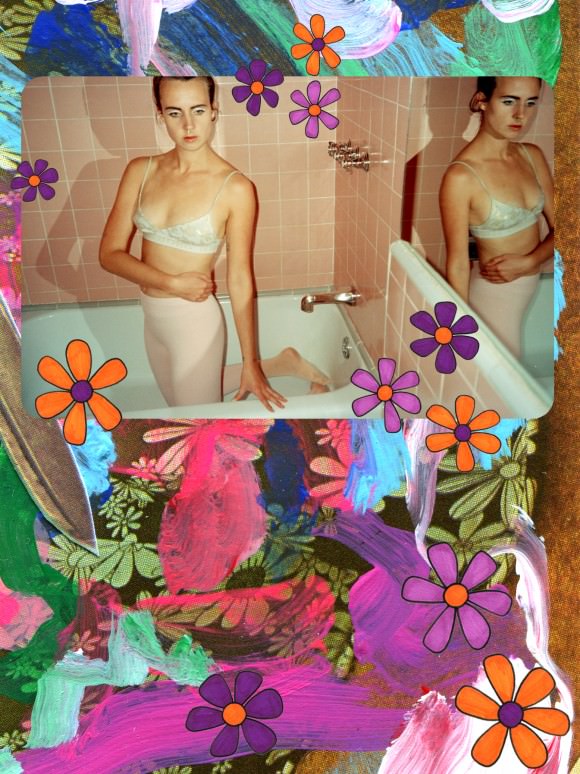 Collage by Minna Gilligan, using a photo by Fryd Frydendahl.

Denmark’s Karen Marie Ørsted, aka MØ, is kind of like the sleeper star of pop music, slowly inching her way to superstar omnipresence with features on songs by Major Lazer, Iggy Azalea and Avicii, as well as her own AMAZING debut album, No Mythologies to Follow, out now on Chess Club Records and RCA Victor. Her pop dreams are just being realized in the past few years, but MØ has been working hard for years, from beginning to write songs when she discovered the Spice Girls as a kid, to forming a punk duo with her friend called MOR, to this very moment.

MØ has had a super busy summer, especially as her collab with Major Lazer & DJ Snake, “Lean On,” has become one of its most blissfully inescapable hits. As she talks about her past and present, MØ is filled with so much excitement and, when I interviewed her recently, she had a lot to teach us—especially about how to maintain a sense of childlike wonder and innocence in everything you do.

BRITTANY: I read that your stage name is not only your initials, but also translates to maiden or virgin in Danish. What’s the significance of that?

MØ: The meaning is virgin, but not only in a sexual way. It’s about being young, unspoiled, and pure, before you become a grown-up. I thought that name was cool and ironic, because a lot of my songs are about growing up, being a teenager, and all the experiences you have, for better or for worse. No matter what happens, you should always strive to maintain that child inside of you. That’s why I chose the name! But also because of my initials and my grandfather. He was a painter, and he signed his paintings “MØ,” so I’d like to follow in his footsteps.

How do you find ways to preserve that purity and childlike nature in your own life?

I guess I’m kind of a childish person! At times, I’m a grown-up, but I’ve always felt very immature in a lot of aspects. I don’t feel like it’s hard to maintain that childlike nature. That’s just natural to me. But I know it’s easy to say ,”You should not worry too much!” or, “You should just let go,” but you should also be thoughtful. It’s important to have self-respect. Sometimes it’s good to do something you’ll maybe regret later, and you’ll learn from that experience and become stronger. You need to find that balance, because it’s so important that you respect yourself.

What were you like as a child and a teenager?

I was a very dreamy child. I come from the suburbs, and I was a bit nerdy. I had a lot of friends, though, so I wasn’t an outsider. I was such a pop girl. I was so into Spice Girls, Venga Boys—all the ’90s pop. My childhood was great, if a little bit boring sometimes. When I became a teenager, I changed. Well…everybody changes when they become a teenager because of the brain chemistry fucking you up!

I turned my back on pop completely and became a punk girl. I started wearing black clothes and listened to hardcore and stuff. Because I came from a really tiny town, people thought that I was mentally ill because I wore black clothes. I changed to a school in the city and found people who were also teenage dirtbags. [Laughs]

Was there a time when you absolutely hated the groups you used to love, like the Spice Girls?

Absolutely. When I became a teenager, I would be like, “No, I’ve never been into pop.” But I was still into pop—I just didn’t want to show it. When I grew up a bit, I got back into pop. It was silly to pretend.

Still, at the time, I was really really really into punk and alternative music. It was one of those crush things, you know? You’re into pop, then you’re into punk, then you’re into hip-hop. I’m still into punk. It will always stick with me, but I fell in love with hip-hop because hip-hop, in the town where I’m from, was related to punk because of the political aspects. It made sense that you would listen to hip-hop even if you were a punk girl or punk dude or whatever. It was almost the same environment.

Oh, yeah! She was my big hero, idol and role model for real through those hard teenage years. When I was a teenager, I was at my most vulnerable and insecure. I could reflect myself in Kim Gordon. She was not this perfect doll. She was a tomboy with this special kind of look: She was sex and she was cool and amazing! Just so cool! I’ve never felt like that “pretty girl,” but she was the light in the dark.

When did you start writing and creating your own music?

I started writing songs when I first came across the Spice Girls when I was seven or eight. I realized that I could find confidence through music. I figured out something I was good at, and that made me believe in myself. Making music became a very big part of my identity and my platform for expression. That’s why it sticks with me so intensely. I need to write songs.

How have you grown in the years that you’ve been writing songs?

I’ve been obsessed with my dream of being a pop star since I was little. Music has been such a big part of my life, and of my daydreams. The five years I spent in my punk duo, MOR, really helped develop me as a person, because we did everything ourselves. We toured Europe in a van and went to New York and played little shows.

It made me aware that this is what I want to do. It’s a really hard industry, and you have to want it from the bottom of your heart. There’s no sense of doubt inside of me, and that’s something I’m happy to know. It’s like that with every job in the world, no matter if you want to be a writer or schoolteacher. You’ve got to want it.

Have there ever been moments when you’ve doubted yourself in pursuing this career?

For sure. I still do, often. You start doubting yourself if you’re very tired and have been under a lot of pressure for a long time, whether it’s in your career or private life. That sucks, but you just have to turn it around. It’s a part of life to have ups and downs. And it’s not, like, major doubt. If I haven’t slept a lot in a long time, then I can definitely feel doubt like, Am I a good songwriter? or Am I good enough to do this thing?

What are your self-care tips?

When I started, I was always working. Now, after having done that for so long, I realized that my body and my mind need to relax. I’m really trying now to have a break and not do anything music-related, even though I feel like doing it. Another thing is exercising. I’m doing yoga a lot. It’s nice, because it’s exercise, but it’s also meditative.

What do you like to do or watch for fun?

I definitely like to see my friends! I used to hang out with them every day, and now I see them once a month. I also like to hang out with my boyfriend. This sounds kind of corny, but I like to walk by the sea and get some nature and silence around me.

What advice would you give to a young songwriter?

Songwriting is so important and genuine. It comes from a true place in you. You’re not doing it to copy someone else. Of course, it’s a cool thing to find inspiration, but it’s important that you really just write the songs that are in you. Don’t try to be something or someone you’re not. It’s a classic piece of advice, but it’s true! ♦