She created the women I longed to see on screen. 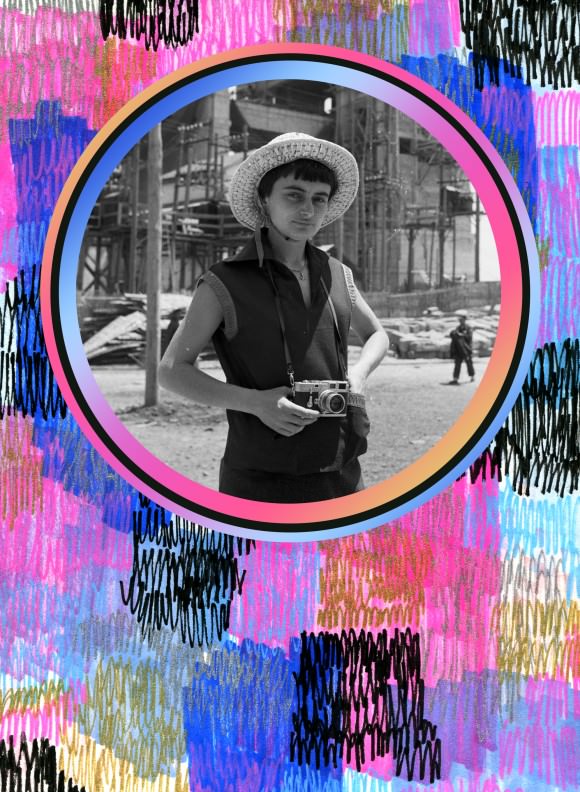 Illustration by Minna, based on a self-portrait.

In the French director Agnès Varda’s 1962 movie Cléo from 5 to 7 the title character says, “Everybody spoils me. Nobody loves me.” The line is perfectly delivered, and encompasses the loneliness and depression that can be felt by somebody who seems to have her shit together. Cléo, a pop star played by the beautiful actress Corinne Marchand, is a little bratty and a lot frivolous. She likes to shop and flirt. She is also, maybe, very sick. The movie follows Cléo in real time as she waits for test results from a doctor that will tell her whether she has cancer. As she goes about her evening, Cléo tries to distract herself from the fact that she is terrified.

The French New Wave refers to a group of directors that cropped up in the ’50s and shone in the ’60s. I first learned about this movement through blogs (what else?) when I was in school. These movies were existential in the most stylish way possible, an antidote to my boring life in Ottawa. I sought out some of the movement’s most iconic titles from my local library, only half understanding what they were about but enjoying them all the same. These were movies made by directors with names like Jean-Luc Godard and François Truffaut. I never questioned the homogeneity of these films; when I was 17, I was still being taught that all great, intellectual artists were white men.

I didn’t see Cléo, my first Agnès Varda movie, until I was 21 years old—21!—that’s years after I first became interested in the New Wave. I was three years into an English major and had learned to broaden my scope of literary works and consume more books by women. I decided to make the same effort with film. Cléo looks a lot like the typically stylish heroines of a New Wave movie, the type you might see referenced in fashion editorials or screencapped on style blogs. It is a very aesthetically pleasing movie. I liked that I could indulge in all the quote unquote superficial aspects that drew me into that era of film. (Whatever, I like pretty things, and that’s OK!) But after enjoying so many visually similar movies, I was ready to watch something written and directed by a woman, that gave weight to the daily and inner life of its female lead. 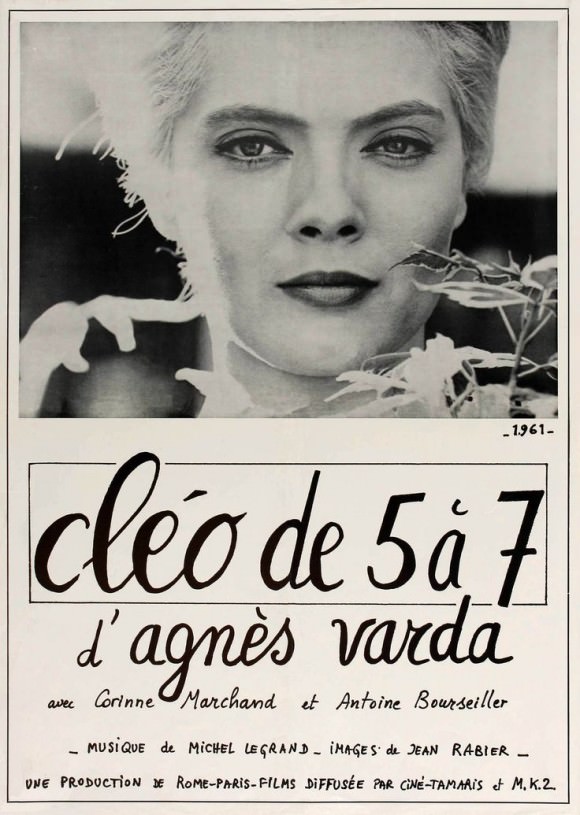 Over the course of the movie, Cléo does nothing spectacular. She tries on some dresses, she rehearses a song, she sees a movie. In one scene, Cléo gets changed for a rehearsal, but she isn’t just getting dressed, because sometimes an outfit isn’t just an outfit, you know? She is deciding how to present herself to the world while she does her job—a job that demands she look immaculate—while secretly freaking out about her test results. This, after having complained to her friend that men only pay attention to her because she’s beautiful. Also, did you know that she is lonely? Because she is: She’s so lonely. I wanted to hug her when I watched that scene. Even though she is a fictional character in a decades old movie I wanted to call her up and say, “Do you want to come over and forget about putting on a pretty face for a few minutes and just talk about our feelings and listen to music? I have some old French records you might like.” My life is nothing like Cléo’s, but I’ve been lonely, too.

Varda’s films lend small moments magnitude: She knows how to frame a shot and how long to linger on a scene before moving on. In many movies of that same era (like Jules and Jim or A Woman Is a Woman), the female leads show up all beautiful and immaculately coiffed, ready to play their part. Watching Cléo was like going behind the scenes with the type of woman we usually barely get to know. Varda gives Cléo space to dread and ponder, to question life. She turned her camera on a regular woman as if to say, Her daily life is just as interesting as any gangster or radical or Gauloise-smoking dude who has read too much Sartre. Varda didn’t need to make a character who was likeable—French cinema was already filled with female muses—she needed to make a character who was real.

Varda herself is something of a character. She was born in Belgium in 1928 but moved to France with her family during the Second World War. She’s mostly lived in Paris, although she did spend time in Los Angeles with her husband, the filmmaker Jacques Demy. (The two were married from 1962 until Demy’s death from AIDS-related illness in 1990 and she made her 1991 feature film Jacquot de Nantes in his memory.) It was while living in California that she made 1968’s Black Panthers, a documentary short that focuses on the political movement in Oakland at the time, and the imprisoned leader Huey Newton.

Varda has also had the same bowl haircut for decades. She is very sharp and funny in interviews; my favorite is this one in the Believer where she opens by pretty much stating how much she hates answering repetitive interview questions and would rather talk about tennis. She has a background in photography but no official training in filmmaking; in an interview with Lula Magazine, Varda says, “At the age of 25, I had hardly seen 15 films.” She was only slightly older than that when she began shooting her first film, La Pointe Courte, in 1955. She made the movie to record footage of a small town for a sick friend who could no longer visit.

Her most recent film, 2008’s The Beaches of Agnès, gives a sense of who she is as a person. Technically it’s a documentary, but I think it can be better described as a visual memoir. Using old photos and film clips, dramatic reenactments and narration, she retells her life as she remembers it. She pays tribute to her mother and chronicles her artistic coming of age. She is sentimental about her marriage and unapologetic about her involvement in second wave feminist protests. She throws in an anecdote about Harrison Ford auditioning for one of Demy’s movies. She remembers moments from her life both big and small. Varda takes her work and her art seriously—why shouldn’t she?—but I was mostly drawn to how candid she is. I sometimes think of great artists who are at least as old as my grandparents as these untouchable, mythic figures, but Varda is all too ready to share her inspirations and her process, inviting viewers into her brain to explore her memories with her. I also like this film for purely selfish reasons: When I see the reverence with which she reflects her life through her art, I think I wanna do that, too! I wanna archive my life through my creative work.

Varda has a number of movies to her name—films, and documentaries, shorts and feature length movies. They range from traditional New Wave features like 1965’s Le Bonheur to her 2000 documentary The Gleaners and I, in which she traveled around France, often alone, with a handheld camera. Some of her films I have connected with more than others: Perhaps you saw her documentary short Women Reply (1975) circulating on Tumblr last year, in which women answer the question “What does it mean to be a woman?” Like many relics of second wave feminism, it’s an unfortunately dated piece, overemphasizing the ciscentric link between gender and body.

I haven’t seen all of Varda’s movies. I started to binge watch all the gaps I had in her filmography, borrowing Criterion DVDs from cinephile friends, signing up for free introductory membership trials on documentary streaming websites, returning to the library. I quickly learned that Varda’s movies are not to be plowed through in one sitting, the same way you can’t really “binge” through a lifetime of heart to heart conversations with a best friend. Her films movies aren’t slow, but they are carefully considered and need time to simmer.

Take Vagabond, a movie she made in 1985, long after the French New Wave had ended. The movie was called Sans toit ni loi in French, which translates to “without roof or law.” It’s a beautifully shot movie, but isn’t exactly pretty. It opens on the corpse of a young woman, then flashes back to show the life of the woman, a hitchhiker named Mona, and the final weeks of her life. Mona is dirty and described by those who knew her as incredibly smelly. She isn’t necessarily rude, but she is blunt. There is no softness to her; she is not a well-styled New Wave heroine. It’s a dark film, one that makes you pull for a character that you know is doomed. Yet Vagabond posits that even though Mona’s life might appear bleak when compared to a candy-colored ’60s Godard film, even though it might be short and doomed, it is still a life, and one worth documenting.

The moments in Varda’s movies that resonate with me most are quiet: Mona conversing with an older woman who picked her up in her car, Cleo having her tarot cards read at the beginning of Cléo from 5 to 7 needing desperately to know her future, subtle moments in the lives of seemingly ordinary people. I see Varda’s movies as radical because they give us the chance to see the lives of women as poetic, as philosophical, as complicated, as having room for depth and lightness together at once. ♦