Taking a break from sex is the best.

Angie: Down for the Count 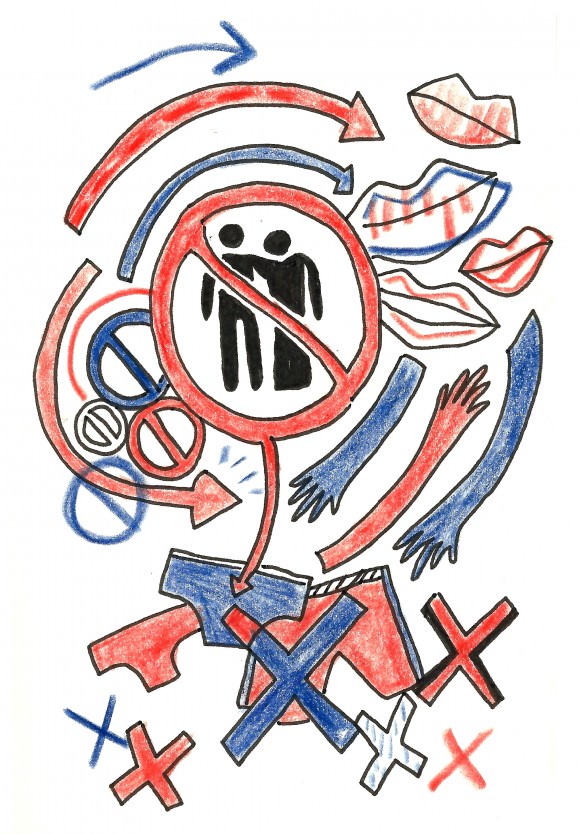 A few years ago, after a bout of severe depression and a series of disappointing dates, I decided to put myself on a self-imposed “sex break.” I knew this was going to be somewhat difficult, as I was always kind of boy-crazy—I even remember the name of my first crushes as far back as kindergarten. (Kevin.) I realized that some of my recent behavior involving the menz wasn’t very healthy. I was seeking some sort of validation out of these dates to make up for something that was missing inside. It wasn’t self-confidence or the need to feel loved, but I thought that, maybe, if I somehow met the right person, everything else in my life would fall into place.

I had a terrible habit of looking at situations concerning my love life in a fatalistic way. If it didn’t work out with a person l was interested in, I took it extremely personally, thinking, I MUST BE THE WORST. I WILL ALWAYS BE ALONE! It was hard for me to understand that sometimes a moment (or romantic interest) in my life could be just a blip in the grand scheme of things, and instead because debilitated by anxiety when things went south with some guy. I knew, deep down, that being alone forever wasn’t my true fate. My priorities were just upside-down.

I was ignoring my depression and the looming call to improve my own life by distracting myself with sexy mistakes, i.e., hookups whom I didn’t care for much and left me feeling shitty afterwards. I just wanted someone to fill an empty space. I had trouble separating my love life and my life-life. I obsessively thought about them, to the detriment of my day-to-day goings-on, and the thing was, most of these guys weren’t even that cool! I didn’t even like them that much! Even so, I became distraught and down in the dumps if they didn’t return an impassioned interest.

I realized that this cycle was exhausting me after I hooked up with a boring guy that I didn’t enjoy being with and was so upset when he ignored me after. When I stepped away from it for a second, I thought, Why am I tripping over him? This is ridiculous! Something is wrong with my brain right now. I knew that I had to profess some missing love to myself—to put my entire focus on my own life, and all of the things I wanted to work on. I was ignoring all of that, and instead putting the race to catch some dick front and center. Thus began my break from dating.

I didn’t have a set plan or timeline, like, A penis shan’t grace these lips in 236 days. I also didn’t have a rule where if I met someone I liked, I’d have to push them away. That would have been some sort of romantic-comedy situation anyway, right? Marie meets cool dude, but Marie made a blood vow to reject all menz for the greater good of the sex-break. Then, at the end of my real-life rom-com, I’d end up running to some airport or train station to profess my love, and everyone knows how I hate to run.

The important things on my new “all about me” list were the following: get a cool new job, move, write more, expand my blog, and start taking care of my health better. A pretty hefty catalog, right? Without having the constant mindfuck that dating had become monopolizing my brain at all times, I was able to actually do these things. I put my efforts into job hunting, working out, eating healthy, having a lot of fun with my blog, and freelance writing—something I finally found the courage to do. If you’re not so stressed out about someone else, it gives you much more more room to put yourself front and center. It was freeing to know that I could accomplish all sorts of amazing things on my own. It might seem like a ridiculous notion, because we should always know that we alone have the power to do anything we want to. It’s just whenever you take away that centered train of thought—whether it’s from being crush-crazy or any other sort of overpowering diversion—you can get mixed up and lose all practicality.

Once I started reaching my goals, I felt like a superhero! The disappointment I was torturing myself with in regards to those past dudes was a distant memory. It felt so unbelievably empowering to do these things for myself. My break wasn’t always easy, but it was a lot easier than I expected. I sometimes found myself as the “third wheel” during social activities—I was basically like Karlie Kloss in this photo of Taylor Swift and Gigi Hadid with their significant others. I was still having a blast, though, and my friends didn’t ever make me feel unwanted. When I constantly hung out with one of my friend-couples, we joked that I was their child.

I was busy, so there wasn’t much time to reflect on the lack of hookups in my life. About eight months in, there was a moment where I realized I hadn’t had even a remote interest in anybody. “NARY A CRUSH!” I often screamed in a 80 percent joking, 20 percent sorta-bummed way. But even with that 20 percent of loneliness, I was having so much fun doing my thang, it never really bothered me. Of course, there is also the “no sex” part of celibacy, and THAT was hard. At one point, I would joke that the title of my “unauthorized autobiography” would be titled Overdressed and Underfucked. At another, I was hanging out with one of my friends and said, “Boo, my vagina—she is screaming for dat DIQUEEE!!” We laughed…but it was true. That’s why masturbating is so fun and healthy, regardless of what or whom you’re pining for.

After a year, which was at times really awesome and filled with personal accomplishments, and at other times very, very intense and difficult, my life did change for the better. Aside from the main payoff—the wonderful focus on me and only me—I also thought hard about exactly I’d want in a relationship. I didn’t want to settle for anyone who didn’t treat me as well as I’d finally begun treating myself.

Even though I knew I was still on my journey [spoiler alert: we always are], I was ready to put an end to the break. It was time to return to the wild world of dating. I was in a really good place with myself, and, yes—the horniness was emitting a thunderous call. My return to hooking up wasn’t seamless, but it was definitely a lot better than it used to be: I felt hurt when someone I was interested in didn’t return the same feelings, but I wasn’t fatalistic about it. Dating can blow in general, but I always knew that whatever happened, I’d be OK: I had fallen in love with someone whom I had always known, but didn’t realize was so cool. [Spoiler alert: It was myself! Duh!] ♦