Why Can’t I Be You: Sarah McCarry

An interview with the writer about mythology, rejection, and diversity in YA fiction. 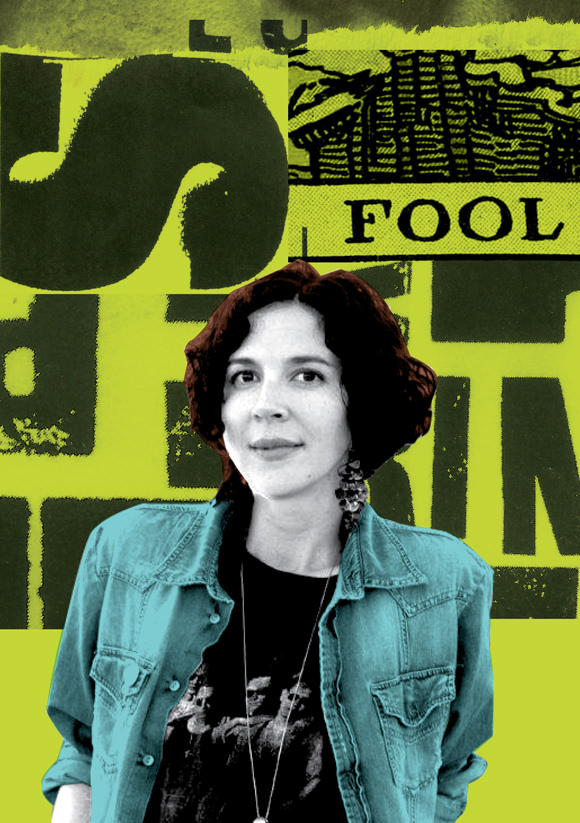 Sarah McCarry is a young adult novelist. Her three books are contemporary retellings of Ovid’s Metamorphoses, and her story worlds are so full, lush, and beautifully imagined that I wish I could just open a door and walk into them. She takes her readers to the underworld in All Our Pretty Songs, on a runaway road trip along the West Coast in Dirty Wings, and her next one, About a Girl, which comes out on July 14, is a quest story about a genius 18-year-old astronomer, her search for her blood family, and the girl she falls in love with on her journey.

The cover of About a Girl features two girls kissing (one of whom is Rookie’s own Lola—plus, the photo was shot by Rookie photographer Sandy)—it’s the first mass-market YA book to ever feature a same-sex female couple. Sarah’s stories may be mythical and magical, but she writes to reflect the world we live in. Sarah is also the editor and publisher of Guillotine, a chapbook series that specializes in revolutionary nonfiction (including HAGS, by Rookie contributor Jenny).

I talked to Sarah about mythology, diversity in YA, publishing, and the importance of being the heroine of your own story—even if it means dropping out of college to join the circus.

STEPHANIE: Hi, Sarah! I adore your books and one of the reasons why is because I adore mythology. I have since I read D’Aulaires Book of Greek Myths when I was, like, eight years old. I became obsessed with Persephone, and as I got older, with trying to understand my own girlhood/coming of age through the lens of mythology. What was your relationship with mythology like growing up? What were some of your favorite myths or stories?

SARAH MCCARRY: I’ve been obsessed with mythology and fairytales since I was a kid (I had the D’Aulaires too!). My aunt gave me the complete collection of Grimm’s Fairy Tales when I was probably eight, I’m sure without realizing that the original stories are full of death and dismemberment and sex and people putting children in pies and that sort of thing. I’ve always been drawn to the really dark, bloody stories: I love Persephone, and I love Medea and Medusa and the Harpies and all the lady monsters. Journeys into hell, vengeance, sad endings…typical goth stuff.

What drew you to Ovid in particular?

I was older when I first read Ovid, I think in my 20s, and I was struck by the beauty of his language, but also by the way the Metamorphoses makes all of these separate mythologies feel like connected epic stories in one big, wacky family. Like, Oh, remember the time that douchebag Uncle Tereus ate our cousins? SUPER awkward at reunions, right? Ovid is really mean, and really funny, and also totally obsessed with death and sex. There’s lots to love.

Ha! Yes, I love the big wacky, awkward family thing. That is so true. Did you know all along that you wanted to do three retellings, and how they would be interlinked?

I knew I didn’t want to write a straightforward trilogy; I had said all I wanted to say about those particular characters at that point in their lives in the first book. But thinking about mythology got me interested in how the same themes might echo and change over time—the same threads that run through the original Metamorphoses, the same ideas of fate and magic and whether or not you can dodge destiny. You can read all three books on their own, but if you read them together you see that bigger picture.

Another one of the reasons that I adore your books is because your cast of characters is real: They are diverse in terms of race, sexuality, gender identity. Can you talk about why diversity is important to you as a writer? I know some writers are scared to write outside of their own experience—what advice would you give them?

Any writing that doesn’t acknowledge that human bodies and experiences and lives are limitless is fundamentally limited (and usually boring). In that sense, I am writing what I know, which is that there are a lot of different kinds of people and different kinds of stories in the world. That said, there are a lot of very complicated issues around power and privilege that go into writing characters whose lived experiences are different than yours, especially when you bring the publishing industry into the equation. There are a lot of great essays out there on that, but I would start with Justina Ireland, Zetta Elliott, Jennifer Pan, Daniel José Older, this interview with Sofia Samatar, and Debbie Reese’s blog.

All three of your books have a quest/road trip element to them? Did you have any great quests, trips or getaways that shaped you as a teenager?

I traveled quite a bit in my late teens and early 20s. I drove back and forth across the country, and rode my bicycle down the West Coast and around Europe, and hung out with a lot of people who were always hopping trains or hitchhiking, and was just very dedicated to having adventures and traveling by myself. I’m really grateful for that time in my life; I think you can learn a lot by throwing yourself out there into the world. The Fool is one of my favorite Tarot cards: having faith in that big leap into the unknown.

Did you go to college for writing or literature? Is that something you would recommend to our readers who want to write and publish?

I actually dropped out of college to join a circus, which is kind of a long story, and didn’t go back to finish for another 10 years or so. I think an MFA can be great if you want time to work, or if writing workshops are helpful for you, but you certainly don’t need one to be a writer. As a friend of mine says, the only thing all the people who wrote a book have in common is that they finished writing a book. There are a lot of different ways to get there.

That is so true. But hold up a second, I think it would be remiss of me not to follow-up on this whole “dropped out of college to join a circus” thing. I understand that it’s a long story and don’t want to get off track here, but can you tell us a little bit about what you did in the circus or what you learned there since I think all of these sorts of experiences are what shape us a humans and writers?

Ha ha! It was a traveling punk circus, no animals, lots of fire—this was back around 1998 or 1999, when every dirtbag punk had their own dirtbag circus. (I wrote about it here—it’s a good story, but was a somewhat unglamorous reality.) There are so many different ways to come to the idea of yourself as the heroine of your own story, which I think can be a hard place to get to if you’re socialized as a girl. We’re taught that our value is attached to the roles we play in the narratives of men. The road is definitely one archetypal medium through which you can reconfigure your ideas about yourself, and that was the most valuable thing I took away from that experience and the experience of traveling in general: This idea that I was the center of my life, that I was living my own story and I could write that story about anything I wanted. I knew early on that I wanted to build my life around my work, instead of the other way around—even before I was willing to admit out loud that I wanted to be an artist—and that’s shaped every choice I’ve made since then.