How to Deal With Clingy Friends 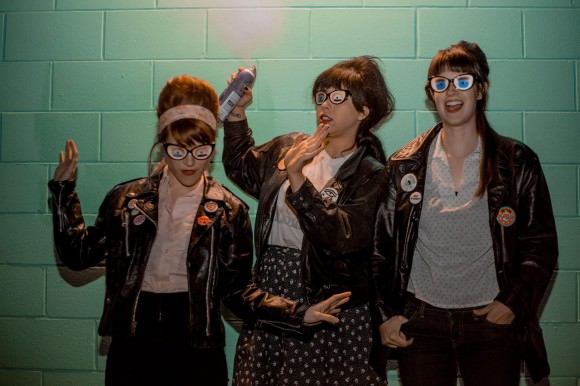 Thee Tsunamis are proud daughters of the twisted, pop-camp aesthetics of the director John Waters, the jagged and tender-hearted jammers of ’60s era “girl groups” (see: Girls in the Garage), and the enduring partnership between good times, riffs, and leather jackets. Rip through their debut album Saturday Night Sweetheart and all you’ll want to do is tease your hair, move your feet, and find something fun to do tonight, stat. Step into their world via this premiere of the video for “Trash Talk,” from Saturday Night Sweetheart on Magnetic South:

The band ringleader Betsy and I hung out over the phone and talked about satirizing the reductive tropes surrounding women in rock & roll, cool vibes in Indiana, capitalizing on stage fright, and some of our favorite bands. Dig in!

DYLAN: Hi Betsy! What have you been up to today?

BETSY: I just got off work. I am a nine-to-five-er, but I do my rock & rollin’ on the weekends. I work at the campus radio station here in Bloomington. I don’t deal with any music, unfortunately. It’s the NPR affiliate, and I do web stuff for them.

What’s your role in Thee Tsunamis?

I’m the songwriter and guitarist for the band. Sharlene plays drums and Jenna plays bass. We all sing.

What’s your personal history with music and getting into rock & roll?

I was a DJ and music writer years before I started the band, so I spent a lot of time thinking and writing about music as a non-musician. I feel like a lot of different influences come together, because I had a lot of time to hone my musical tastes. I’ve sort of been playing guitar since I was 12, and I was a songwriter, writing bedroom pop songs, also playing in other people’s bands. I never was in a band or performed any of my own songs, though, until Thee Tsunamis.

We started about three years ago, when an opportunity came up to play live. I had never performed before, and have bit of performance anxiety, and the idea of playing my own songs, showcasing them before strangers just paralyzed me with fear! But I finally got the point where I really wanted to do it, and a friend of mine was hosting an informal art party and it seemed like a good way to force myself to do it. A friend of mine who was the first Tsunamis bass player had similar anxiety, so we signed up to play the show, and we emboldened each other to do it. It felt like a pact, which we followed through. [We] played our first show, and I’ve been hooked ever since.

Did you and your band develop any strategies or tips for getting over the anxiety around performing live?

That first show set the stage for this. I channeled all of that nervous energy into this creative fury of songwriting and accepted that it was part of who I was—I even wrote a song called “The Jitters.” In some ways, our music is kind of [wild] and loud, and also emotionally honest, so recognizing anxiety as part of the experience itself has been a coping strategy.

That’s cool to hear you say that, because getting up there is not just for those who are, like, effortlessly cool with it and have a D.G.A.F. attitude in front of strangers! For you, perhaps it is less about ignoring or overcoming stage anxiety, but embracing it instead?

I think that kind of nervous energy adds a performative element; I’m doing something I didn’t think I was capable of doing, and I feel even cooler. It makes me feel like I’m doing exactly what I want to be doing, and I’m totally capable of it!

What’s your feeling on playing rock & roll shows in the Midwest?

I’m a transplant here; I come from a more blues and roots music background. My theory of the Midwest is that it is a really great place to hibernate and be creative. Especially Bloomington, Indiana, where we are from, which is a really small town that’s buried under layers of snow in the winter. There’s not a lot else going on, so you create music and try to get really far out there to keep yourself and your friends entertained. Music is happening the Midwest, for better or for worse, because there’s nothing better to do, so people might as well pour themselves into rock & roll!

That reminds me of a couple of the Gizmos’ songs, “Real Rock and Roll Doesn’t Come from New York” and “Midwest is Alright.”

Yes, and guess what—they’re from Bloomington! I got to meet all of them last year, and it felt like a full circle moment, since I found out about them after I moved to Bloomington and really started getting into local punk history. We’re also really close to Ohio, home to a lot of Rust Belt garage rock, and realized there’s something of a tradition here. There’s something toxic in the water that makes people wanna make mutant rock & roll! The Gizmos are a great example of that history.

In carrying the torch for one of my all-time favorite American traditions—the rock & rolling, bouffanted, leather-jacket-wearing babes looking for a party—who do you consider your predecessors of note?

There are a broad range of influences that extend to ’50s era rock and roll and R&B, ’60s garage rock, girl groups, ’70s punk, ’80s no wave, ’90 budget rock, all of that stuff—I had a long time to curate a sound that I wanted. A lot of the direct influences we’re bringing on the particular album are the New York Dolls and the Bobbyteens, and the Runaways: bands that were satirizing the idea of female pop stars. Our album Saturday Night Sweetheart is a campy and transitive portrait of “female experiences.” For that album, we wanted to look like both the Bobbyteens and the New York Dolls and be like drag-queen versions of ourselves. It’s very much a tongue-in-cheek, B-movie take on girls in rock & roll.