I don’t need to look “good” to be worthy of basic respect. 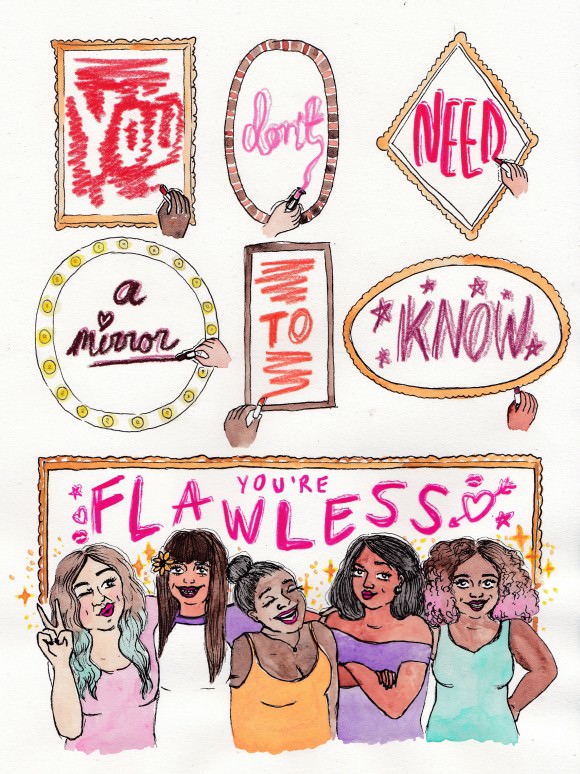 How do you talk about beauty? What can you possibly say about it, unless you’re willing to examine the actual entire breadth of human experience? We experience and express beauty in nature and art, in music, as a fleeting image or a half-forgotten memory. Many of us also perform beauty—or, at least, what we are told beauty means in the way that word is supposed to apply to female bodies.

In so many cultures, being a “beautiful woman” stands for thin, pale-skinned, cisgender, and able-bodied—an image that is obviously limiting in terms of diversity and lacking in imagination, so the discourse surrounding beauty shifts toward one calling for inclusivity. But that’s not the argument I want to be part of. Instead, I want to talk about the relentless demand placed on girls to perform beauty in the first place. The unspoken understanding that girls must perform beauty unfailingly and incessantly as a crucial part of their selfhoods cuts across cultures and is present in every facet of popular media—and it’s not just an understanding, but something of a demand. What I want to argue is that this is far from the necessity we’ve been taught to see it as. It is inessential to our lives as women, and can be thoroughly dispensed with.

My struggle with performing beauty was conducted through the lens of being fat. Thinness was my bugbear, a crucial aspect of beauty that I failed at, dramatically, repeatedly. I was a fat child, and it never really bothered me until I crashed into my teens and realized that there was an entire social currency that I, as a too-tall, too-fat 11-year-old girl was bereft of. When auditions were announced for the fifth-grade school play, I was rabidly eager to be chosen as the princess. The teacher in charge looked over my shorn head and general gawkiness, and chose the petite girl with the long braid in the front row. I was confounded. I was one of the best students, and certainly the best at language (if not the most articulate, because I stammered). I had never not expected to be picked that day, and it was the first time I became aware that huge, fat girls with cropped hair do not make good princesses.

Throughout my teens, my lack of beauty was rubbed in by friends who complimented me on my pretty face with a gentle reminder that I really should lose weight, by boys who saw me as “one of them,” except when it came to the punchline of the fat joke they made me out to be, by the thin and pretty girls, whose laughter followed me in classrooms and hallways, out in the courtyard and all the way home.

This presented a problem: Above all, I wanted to be loved. In the absence of anything of the sort from my family, I was convinced my only hope of someone loving me lay in finding a boyfriend. As I grew older, and my friends paired off one by one into their private worlds of adoring glances, hand-holding and so much more I couldn’t even comprehend (making out! sex!), I was still the fat joke…but where I was once one of the boys, now the entire male population of the school avoided me en masse in case any of them were ever caught talking to me and had to suffer the ensuing shame.

When I was 17, my then–best friend set me up with a boy she knew. We went to a secluded café that evening and he spared no time before furiously launching his body onto mine. The next day, when I saw him in the hallway, he looked straight through me and walked on. My body was only to be desired in secret and was unworthy of public acknowledgement.

By the time I reached my 20s, my ongoing failure to be beautiful had become something of an obsession. It dwarfed all else: I developed an eating disorder. My personality, ambitions, diet, even my body language were all geared towards this singular objective, and the untold joy it would supposedly bring. If in high school, I made the effort to ask guys out despite the inevitable rejection, in college I stared them all down with an armored gaze that screamed, “I reject YOU.” Not now, I told myself, Not yet. I wanted love, but I wanted to be worthy of it, and so it had to wait. I’d been introduced to the transformative power of personal grooming in my last couple of years in high school, and like every other girl in my social group, I waxed, threaded, shaved, tweezed, and none of it really made a difference. Or, at least, not the kind of difference that mattered to me because I was still fat and getting fatter, and it felt like I was embellishing something that wasn’t worthy of the attention, something that would be ridiculous no matter how many manicures I got.