Places/ways to literally chill out this summer. 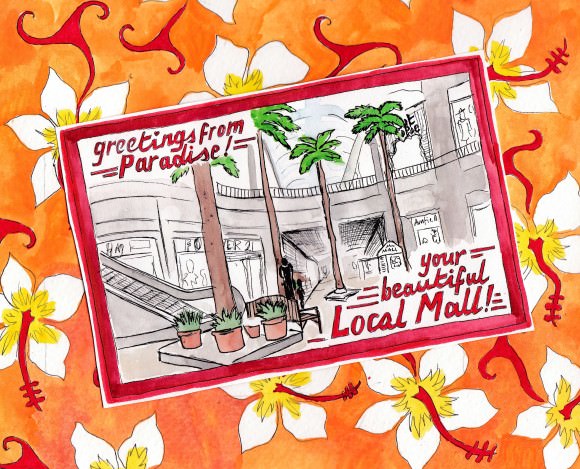 Summer is awesome!!! Well, at least it is in our heads during the winter when we’re freezing our butts off. But then it’s here and it’s too hot to move and when we do our thighs stick together and we develop perpetual pit stains and WE START COMPLAINING A LOT. Splashing around in water offers relief, as does consuming large quantities of ice cream, but summer’s around for 93 days; eventually you’ve got to switch things up. Here are some other ways we’d recommend to stay cool:

Golf carts
My grandpa used to live with us, and he had a HOT PINK golf cart he sometimes used to get around. He barely drove it, so on hot days my friend Jessie and I would drive it really fast up and down our driveway to cool off. While golf carts (especially those tricked out to Paris Hilton’s standards) aren’t readily available to everyone, this is a pretty easy trick to try at home: Grab a bike and find a big hill to pedal down, and your pits will be aired out in no time! —Lucy

Refrigerators
helo. i Enjoy goingin the cold box becaus AmyRose (terible Woman wholives here to) doesnot Fit in ther with Me. i Like tolook at the Difrent foods such as Eggs and juise. My fur gets colder which i Enjoy for the summers Time refreshmant. Then AmyRose (terible Woman) gets me Out with picking Me up andi hiss at her but Atleast i am Cooler and Hapy all over. —Mrat Spiegel, aka Amy Rose’s cat, who is a surprisingly good typist [Editor’s note: With all due respect to Mrat, it is NOT advisable to put living things, including yourself, in the refrigerator.]

Tomatoes
There’s no AC in Seattle like anywhere, and my mom and I lived on the third floor of our building, which was so HOTTT. During heat waves, we’d eat tomatoes ALL THE TIME. Caprese salad is like all I want when it’s over 95 degrees! Tomatoes are peak-fresh and magical-tasting during the hottest months of the year, especially when they’re from the farmers’ market. And they’re so juicy that eating one is kind of like drinking a cup of water. There aren’t many other solid foods more refreshing than a beauteous tomat’! —Dylan

Reading all day in air-conditioned rooms
Let me tell you, it was not fun growing up in the hot ’n’ humid Midwest as a person with a low tolerance for mugginess. I was constantly looking for some kind of respite involving both something to cool me down and something to keep me entertained. For years, my hot-weather routine was to ride my bike to the library during the cooler morning hours and check out all of the books I could carry. When I got home, I’d prepare myself a spread of all available snack items, which I would take to my parents’ bedroom because that was where our house’s lone air conditioner was installed (um, that was a bit bogus, parents). Then I would camp out reading there ALL DAY LONG. I’d only leave to go to the bathroom or get more sustenance, and when I returned I would melodramatically stand in front of the AC for several minutes until I was cold enough to get back under the covers of my parents’ bed with my books. —Stephanie

Movie theaters
When it’s really hot, I’m all about an all-day marathon at the movie theater. Buy one ticket, start with the earliest showing, and then sneak into other movies for the rest of the day. Leave the theater once the sun sets, and you’ve spent hours in the cool embrace of aggressive AC + movie theater snacks. Orrrrr sneak your own snacks in, so you don’t spend 100 bucks on Sour Patch Kids and icees. —Lauren

Above-ground parking garages
I really like parking garages in the summer! There’s a really tall one near my house, and if you go to the top floor it’s all windows, with a great view of the city. It’s like a private air-conditioned balcony! Sometimes I just hang out in there with a book or with friends. It also used to be my super-secret dating spot, ’til I noticed I’d been making out in front of the security cameras, so watch out for those! —Tova

Moving cars
It was 104 degrees on my 16th birthday, which is in July, and the heat and humidity caused the horn of the car I was using for my driving test to short circuit or something. The DMV dude would not allow me to take the test because the car “did not meet safety standards.” UGH! But I went back a few days later when it was like 15 degrees cooler out and the horn worked, I passed my test, and I then basically usurped my parent’s 1991 Honda Civic wagavan for the rest of the summer. I’d cram all the friends I could into that baby, and we’d ride around with all the windows down. When it was really hot, we blasted the AC while we cruised around. Our destination? Nowhere in particular, though 7-Eleven was always on our route ’cause nothing cools you down like a Slurpee. —Stephanie

Band or orchestra rooms
I had band camp every summer. The rehearsal schedule was rigorous: We had a 9 AM to 1 or 2 PM block, a break, and then another block from 6 PM to 9 PM. It would be so effing hot that I would do anything to avoid sweating any more buckets than I already had, so during breaks I’d find air conditioned solace in the school’s empty orchestra room. Since it was summer, the chairs were all stacked and there was a wide-open space with a really old piano. I’d grab sheet music from the music library and teach myself songs. Sometimes I would skip the classical stuff and just play Top 40 hits from memory—I even gave Rihanna’s “Umbrella” a sick harmony. I think those times spent alone with the piano, beating the heat, helped me with my musicianship more than anything else. —Chanel

The mall
THE MALL! As a teen mall goth, I spent hot summers in the food court of Polaris Fashion Place, chilling out with slices of Sbarro pizza, sipping on fountain Sunkist, and tugging on my spiked collar from Hot Topic. In the mall, I could still wear my JNCO jeans and fishnet long-sleeve shirts despite it being miserably hot outside. Not even 90-degree weather could stop me from expressing my true torment! —Meagan ♦