OK, so my stage persona is more like Liz Lemon—but she’s still powerful. 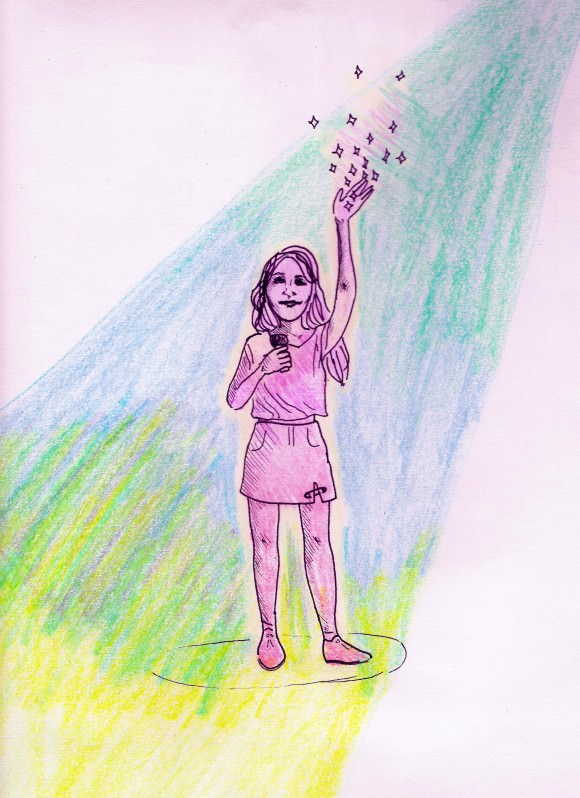 Anyone close to me knows that I love to sing, but that I also have intense performance anxiety. This can be traced back to one of my earliest memories, when I was four and had a small part in my school’s Christmas pageant. I blundered on stage in my tinsel wings and pipe-cleaner halo, gazed out into the bright lights, and screamed with unwavering commitment (and excellent pitch!) until my mom carried me offstage in a shower of tears, while everyone else laughed. The next 22 years were spent avoiding similar situations. I wouldn’t sign up for piano recitals and would get “sick” before class presentations. In college, I even dropped classes that included public speaking.

I grew up thinking about myself in a very restricted way: I saw my strengths or abilities as innate and unchangeable, like I was born with all the qualities I would ever have. Adults in my life would notice and point them out. “You have a good ear for pitch, you must be a singer!” or, “Look at those hands, get this girl a piano!” I felt like my talents were inventoried and defined for me, and that it was my job to live up to them.

I haven’t conducted a national poll, but when I talk to my sisters or girlfriends about it, a lot of them say they had similar experiences. Boys get this kind of reinforcement from adults too, but they are more likely to be taught that they can develop new skills through hard work and practice—skills you can’t possibly be born with, like computer programming or audio engineering. My parents signed my little brother up for so many classes and sports teams that he was literally the worst at, but no one doubted him and he was never discouraged by a bad performance. The overwhelming takeaway was, “He’ll get better, practice makes perfect! Just give it time!” I never approached anything in life that way. If I was bad the first time, then I believed I would always be bad. Playing piano and singing felt like my only options; sticking to my natural abilities was the safe bet.

When I succeed at something that took time and effort, I minimized how much work I had done. “This A+ English paper? I whipped it up in like five minutes last night. I didn’t even do the reading!” Or, “This ornate, sculptural hairdo? I woke up like this!” Long hours of hard work and diligence weren’t even a point of pride to me. My fear of being “not good enough” was stronger than my desire to succeed, which led to an avoidance of anything difficult or intimidating. Unfortunately, it all blew up in my face about five years ago when the music I’d been making in my bedroom and posting online became a hot commodity in the blogosphere overnight. Suddenly I had to confront my biggest fear—performing in front of an audience—in order to do what I loved most.

Somehow, despite my avoidant behavior, my band was booked to play our very first show. It was a perfect summer day in my hometown, Denver, and we were playing at my favorite small club. I was beyond thrilled—but something was stealing my joy. I felt like a big, saggy billowing shape descended over me. It was sort of like a rain cloud, or a really heavy blanket. It stole my energy. It stole my appetite. When I tried to eat, food was like concrete in my mouth. I couldn’t chew or swallow. I felt vague, numb. I wanted to be happy, but the feeling worsened with each passing minute.

The afternoon before the show, I biked to my best friend/bandmate Patrick’s work so we could have lunch together. As I waited for him to join me, his coworkers approached me, one by one, to say how excited they were for the show, and that they would all be there. My anxiety flickered with each polite congratulation. I tried to make my face look enthusiastic, but it felt wrong, like a grimace instead of a smile. “Thank you, I’m so excited!” I said as all feeling drained from my body. “Should be a great show,” I assured everyone as my vision went white and I collapsed to the floor.

When I woke up, I was wearing an oxygen mask. Worried faces surrounded me. A very kind paramedic informed me that I had a panic attack but would be fine, and that I should lay down and eat a hardboiled egg. I had lived my whole life with anxiety but never had a panic attack before. This scared me. I worried that it could happen anytime, anywhere. Patrick asked me if I wanted to cancel the show. I said no. I ate a hardboiled egg instead. Weirdly, it helped.

I wish I could tell you that my public meltdown was a turning point, that our show was a huge success, and that I was cured of my stage fright forever. Months and dozens of shows later, the panic attacks stopped, but my anxiety was in full bloom. I wasn’t owning it onstage: I was coping. Reviews of our first tour confirm this: “Did not interact with crowd.” Yeah! I was pretending like the crowd wasn’t even there! “Looked unsure of herself.” Again, yep! And my favorite: “Was about as fun as a nap, which is kinda fun.” Touché. Music is my favorite thing in the world. I love writing songs with Patrick even more than I fear performing them, but something had to change. I knew it. My band knew it. My friends knew it.

One year later, I found myself backstage of an old theater in Manchester, England with Alexis Krauss of Sleigh Bells. Her band had just finished their set, and we had opened for them. As usual, I had been too nervous to think, move, eat, or really do anything until our set was over. Alexis, on the other hand, seemed to drift onstage with superhuman confidence and magnetism. I was counting down the minutes until our set was over. She seemed to revel in every moment. After the show I asked her how she did what she did every night. Didn’t she ever get nervous? She explained to me that her stage persona was an invented, hyperbolized extension of herself. She needed to become someone larger than life in order to command the crowd night after night. That was the first time I understood that there is a distinction between who you are onstage and off. There is a transformation. And the onstage act isn’t just for the crowd, it’s also for you. It’s a protective barrier and a source of strength. I was intrigued.

Many artists have created stage personas for themselves: There’s Elizabeth Woolridge Grant’s lovelorn chanteuse, Lana Del Rey; Andrew Fetterly Wilkes-Krier’s party bro, Andrew W.K.; and Sasha Fierce, the alter ego Beyoncé gifted the world in 2008. While doing press for her record I Am…Sasha Fierce, Beyoncé spoke at length about the disconnect between her everyday self and the woman she became onstage. She found something she needed in Sasha Fierce. The stage isn’t real life, but audiences have real expectations of anyone who walks out on that stage. That’s why it’s called a show and not um, a…“nap.” It’s escapism. Artists, musicians, and performers pretend to actually be someone many of us wish we were: incredibly cool, perfectly dressed, unbelievably talented or beautiful. This is really fun, and probably a super-important role of art—to live out our fantasies through the lives of others. All those years I wrote music alone in my bedroom, I never thought about what it would mean to make my work public, performative. Suddenly I was the one onstage, and I held myself to the same impossible standards that I held all of my cultural and musical icons to. My fear of being onstage stemmed from deeper questions about my identity: How should I be? Who should I be, when so many people are watching?

Here is what I know: I don’t see myself in Sasha Fierce. I am a terrible dancer. I can’t walk in heels. I don’t come to life when hundreds of strangers look at me. I want to shrink away until I’m invisible. But I have a Sasha Fierce—she’s just a lot more like Liz Lemon. On stage, I’m silly and weird and self-deprecating humor is my secret weapon. I learned this the hard way when my keyboard once broke a few songs into my band’s set at a music festival. The show came to a complete stop. I didn’t know what to do, so I started to talk. I joked about the light show we didn’t have, and about our gear that didn’t work. Everyone laughed. I joked about how this was my worst nightmare come true, and the audience and I all laughed together. Instead of panicking or shutting down, I felt a connection—like a barrier finally melted away. In that moment, I found myself on stage. Liz Lemon isn’t loved because she’s flawless—she is loved for her flaws. When I am most exposed, I feel most free. Liz Lemon isn’t fearless, but she is brave. And so am I. I prove this to myself every time I play a show.

My Sasha Fierce/Liz Lemon didn’t emerge on the scene fully formed and perfect, though. I’ve had to learn by doing, which meant lots and lots of mistakes. But there are some strategies that consistently help me conjure the more fearless, confident parts of myself, and hopefully they can help you get in touch with yours, too:

1. Surround yourself with people you can confide in, and who will tell you the truth. Everyone needs a support system, and mine helps remind me who I am and what’s important when I lose sight of those things.

2. Keep busy. Worry begins when my mind wanders. Right up until the last minute before I go on stage, I have a routine that keeps me focused and occupied. Because I struggle with anxiety, my routine is focused on calming down. I do breathing exercises and vocal warm ups while I handwrite our set lists before every show. This quiets my nervous energy but keeps me in show-mode.

3. Get out of your head and into your body. When step two doesn’t work and my mind goes crazy, I escape to my body by biking, running, cleaning (weird, I know), dancing, or doing yoga or breathing exercises. Afterwards, my body feels strong, and my mind is quieter, happier.

4. Give yourself permission to fail. Sometimes the worst thing that can go wrong is the best thing that could happen. I learn the most and gain confidence through my mistakes. If nothing else, I can always point to shows where I lost my voice, or the sound system died, and say, “I survived!”

By giving myself permission to be flawed, I gave myself the chance to be truly good at something I love. Now before I go onstage, I undergo a transformation. I become exactly who I am—just a little more daring. ♦

Alaina Moore is a writer, and a musician in the band Tennis.