In Defense of Deleting

Nothing on the internet disappears, but there’s no shame in erasing stuff that doesn’t reflect me anymore. 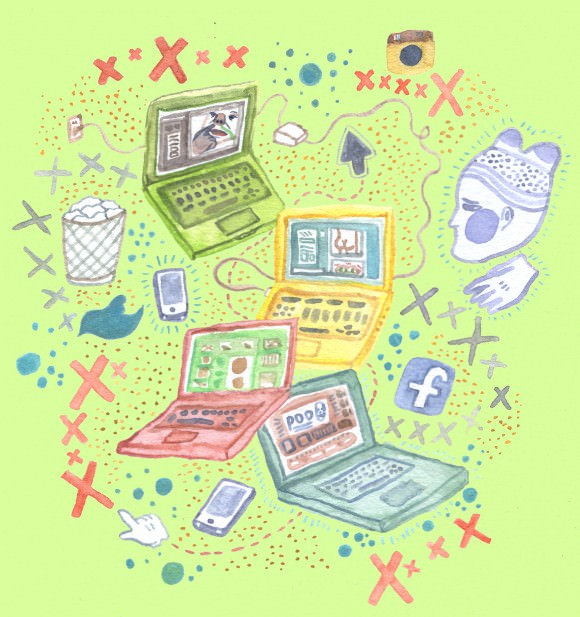 As our moms, teachers, and even CERTAIN WEBSITES repeatedly stress, nothing on the internet ever truly disappears. The internet has held a record of some very painful and embarrassing stages of my life. My online identity remains a fixed being, even while my in-person identity shifts, changes, and discards layers on the daily.

While it’s definitely amusing to look back and read things I’ve written or posted when I was in different stages of life, it becomes far less amusing when I consider how much of that writing or those photographs are visible to both everyone I’ve ever known and grown up with, plus complete strangers. I’m not ashamed of what I used to think or feel—I just don’t know if I like so many people having access to a complete archive of my thoughts, emotions, and pictures dating back to 2008. I’ve made it a habit to delete or hide most of the old posts (and even some not-so-old posts) from my social media profiles, unpaid writing I did for websites or blogs that promote views I can no longer stand by, and videos of me performing poems that I would rather keep to myself.

Once, a friend and I were having a conversation about online identity. I mentioned how I like to delete or make private a lot of my social media and internet presence. She was really surprised by this, and said she never deleted anything from her Facebook or Tumblr, even posts that were later identified as containing offensive content or misguided political sentiments. I asked her why, and she said it felt inauthentic; she didn’t think it was fair to curate your online or social media presence in such a way.

I respect where my friend is coming from and recognize that a lot of people feel similarly. But I don’t think there is anything noble about refusing to delete something that no longer reflects your political views, feelings, or ideological/emotional growth. I have believed a lot of varied things throughout my life, and these beliefs have disappeared or evolved over time. Pretty much all of my feelings on most subjects have done a complete 360 in the past few years. I don’t think the people in my life expect me to permanently hold onto what I used to think or feel, and I sure hope they don’t consider me inauthentic for evolving in my beliefs and feelings on certain subjects. You know—like a growing human being does.

Curating is a strange word, because it makes it seem like there’s something disingenuous about paying attention to the way you appear in person or online, when, in fact, this is something all of us do constantly. There is nothing shameful about it. Self-awareness is often viewed as self-consciousness or even narcissism, a dirtying of the “real” self. One of the most beautiful things I ever heard on this subject came from a talk by the poet Linh Dinh, whose work relies heavily on his interactions with other people, especially strangers. He said that people put on a show for one another, and that he finds this very touching: the fact that we all care enough about each other to make an effort and think about how we appear for one another. There was nothing patronizing about the way he said this. I felt as though he truly appreciated the way people presented themselves to him, and the pains they would take to make sure to be what they thought were their best selves around him.

I don’t think my online identity matters in the same way as my in-person identity does, but I think it matters enough for me to consider it. Our online identities are too complex for us to say they aren’t real. There are so many people I’ve met online who I feel very close to, despite having never met them in person. The court can hold us accountable for things we’ve said online, making our online selves legally authentic, too! As my grandmother loves to remind me, many people get fired from their jobs for things they’ve written on the internet, and, more personally, I have been turned off by a potential date because of some offensive things I saw on their Twitter.

I am not into the idea of being similarly judged for what I do online if that judgement is based on ideas I don’t believe in anymore. When I was in high school, I wrote a few unpaid articles for a religious website with sentiments that were very influenced by the pressures of the environment that I was in. I’m sure I believed in whatever I was writing when I published those articles, but after a few years, I began to feel uncomfortable with the fact that they were the first thing that represented me whenever anyone searched my name.

After a few years of worrying about who would read the articles detailing my dated fears about my relationship to God, I anxiously emailed the editor of the website and explained that the articles no longer reflected my feelings or views. Because I signed no contract in order to publish the articles, I asked her if she was able to take them down, or if not, change the name they were under. I expected her to say no, which is why I was surprised by her very kind response. In addition to agreeing to remove the articles, she wrote that as we move through life we all evolve, and, if we’re lucky, continue to develop. She said she admired me for my sincerity and integrity. After receiving her email, I thought about how allowing ourselves to delete and respecting others for exercising their right to delete, instead of thinking of it as “hiding” or shame of the past, we are being permissive and kind about the reality that people grow and change and make mistakes.

On some level, I know that I’m never really capable of getting rid of something once it’s posted online. The deleted video performances are still somewhere out there, Facebook still has a record of every picture I’ve posted, even if my friends can no longer see them, and my tweets are all stored and owned by Twitter—even the ones I’ve deleted. Nothing on the internet disappears, but there’s no shame in hiding or getting rid of whatever is in your power to rid of, so long as you no longer agree with the way it represents you. I like being allowed to grow and change in person, and so I push my online identity to reflect that. Caring about how we appear is just another consequence of being alive, and I don’t think that recognizing that is dishonest in the slightest. ♦