How to Get Out of Your Head

And into the real world around you!

Because You Can: Plus-Size Swimwear Extravaganza 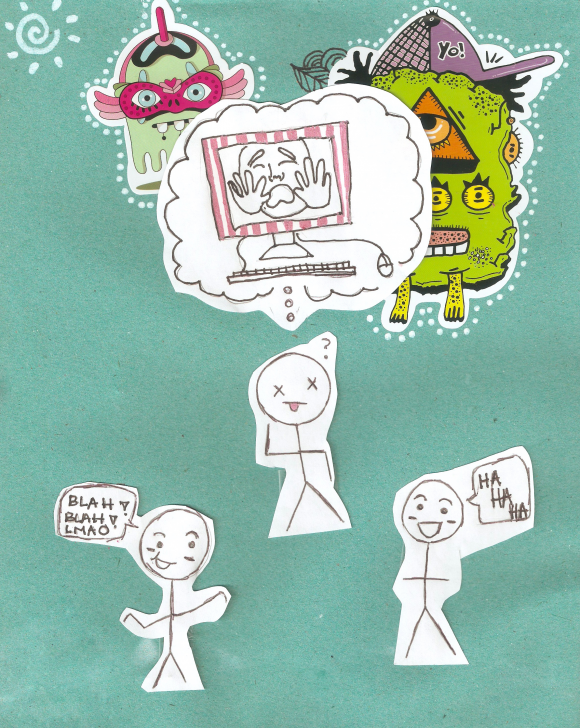 Hello there, promising youths of Rookie! Today, I will share with you all that I know about life. Take notes:

All right…I might be exaggerating a little bit. Because what I genuinely wish for all of you, and certainly me, is a regularly meaningful existence filled with energizing, compelling, joyful brains/feelings/peoples around! Sometimes, though, it just doesn’t feel like that. During those times, a day (or a week, or an otherwise long time) follows the script above, and it’s exhausting. Maybe you’ve just had a day and don’t want to talk about it, or are deep inside some cyclical and nervous overthinking and can’t seem to wiggle out of your own brain and into the exterior world. Maybe you’re just tired! In any case: You’re stuck in your head, which is a bit of a solitary place. No one else can get up there, and it can be hard to climb out once you’ve burrowed in deep.

Then, you remember that you had plans with friends. Oh, right: people. How do I deal with those? Under these circumstances, what do you do to stay in a conversation and not give off a passive I’m totally ignoring you vibe? How do you not seem like a jerk to others if you’re just really, truly out of it that day? The goals of the following answers to those questions are twofold: to develop strategies to launch you out of your ruminant brain and into the present social situation, and to avoid talking about yourself—it can be surprisingly pleasant, diverting, and/or cathartic to open up, but it’s also OK if now is just not the time. Now: Let’s jailbreak you from the human mind!

Develop an armor of questions.

Having some Qs at the ready gives you something to talk about that isn’t you, while also keeping you engaged and in control in a conversation. By asking thoughtful questions, you still convey that you are interested in your convo partner, with minimal personal contributions required on your end. One example: I’m at a show, and a casual acquaintance walks up. Predictably, we get stuck in Small Talk Mode. To keep it light and awkward-silence-free, I ask, “How’d you find out about this band?” This works because it’s objective, not too intimate, relates to the moment, and isn’t fake- or arbitrary-seeming—after all, we’re both there to see the same act.

Another common instance: If I’m hanging out in a group of new people, or have just been introduced to a friend of a friend, I say, “Tell me how you guys know each other!” Lots of people actually like the nostalgia that results from that question, and it takes the spotlight away from you, the newbie.

My favorite self-deflecting question of all is the ol’ standby: “What did you do today?” It sounds obvious, but after I read the advice solidified by Krista in “Life Skills 301,” I turned it into a regular habit, much to my benefit. Everyone can answer it, and it’s not about you! If the question is reflected back in your direction: no sweat. Pick one thing that isn’t very revealing about your perhaps less-than-enthusing day. For instance: “Not a whole lot, but my favorite part was going to Costco because I got to hit the sample circuit.” Voilà: question answered; personal heaviness avoided.

Since one of our goals here is to stay engaged, we have to stretch ourselves a little beyond just having a few standard questions to lob at a person. To avoid reaching the dreaded dead end when the person is finished telling you about their day or whatnot, it helps to look out for opportunities to follow up. Plus, if you occupy your mind with the task of attentive listening, you edge out any room for your cyclone mind-zone to spin you back into spiraling thoughts.

The basic question of how a person spent their day often allows for one of my favorite follow-ups, which is, “What did you eat,” if they happen to have mentioned trying out that new bánh mì shop or making themselves a wonderful breakfast. I love to hear about what people are eating, personally, but if that’s not your bag of chips, find other points in their recap that offer opportunities for follow-up questions. I’ll shoot you some more examples of how EZ PZ and totes naturale it can be once this becomes a habit. So: How was your day?

If I was Them-Person and you were You-Person, I would come away thinking, That girl You-Person, she’s really kind and fun to talk to, because paying attention shows that You-Person cares, and it also anchors You-Person in the conversation, as to not float away in a space-out (which, let’s face it, is rude even if you are in a tough headspace—let’s not do that!). Paying attention grounds you outside of your head for a moment, which allows room for another person to be with you for a little while. Isn’t that nice!

When I asked other Rookie contributors about how they stay present when they’re out of it, Estelle expanded on the idea of zeroing in on other people as a way to calm down with this primo suggesto: “You could pretend you’re a ‘person journalist,’ or that you’re Harriet the Spy: Assign yourself a little writing task for when you get home: Recount something each person said and how you felt about it.” Even if it is an imaginary assignment for the sake of the social moment at hand, pretending you are a reporter/recorder taking in the interactions transpiring is a pretty proof-positive way to keep your brain on its toes.

Think of this as the higher evolution of the paying-attention process. Estelle also wisely brought up the concept of mindfulness. In her words, mindfulness is “a meditation technique where you really focus on what’s happening around you and recognize that while you have thoughts going through your head, they aren’t permanent—they can pass on through.”

Mindfulness can help in both paying attention, which leads to staying engaged and involved, and in calming down an over-occupied mind, aka during those moments when your inner voice won’t turn off, and is maybe even trying to sabotage your otherwise decent interactions with thoughts like, I’m not interesting enough! I have nothing to say! I feel anxious being here! That was stupid, shut up shut up shut up! These are all reactions and judgments, not fixed truths! They will pass, if we allow them to.

Identifying moments of anxious mental pitter-pattering or hyper-self-conscious thinking takes time and practice, so that you can get to that point of mindful awareness. UC Berkeley’s Greater Good Science Center lists helpful steps for those beginning to train themselves toward mindfulness, including breathing and thinking and bodily exercises.

If you find that your inner voice is often drowning out the ones of the people talking to you, try training yourself toward mindfulness when you’re on your own: What sounds are happening around me? What colors are here? By bulking up your mindfulness in private moments, you can then use it in times of need! Practice while you’re sitting in class, or riding the bus, or having a banal conversation at your family dinner table.