How to Deal With Clingy Friends

Successfully Slacking Off on Summer Reading: A Taxonomy 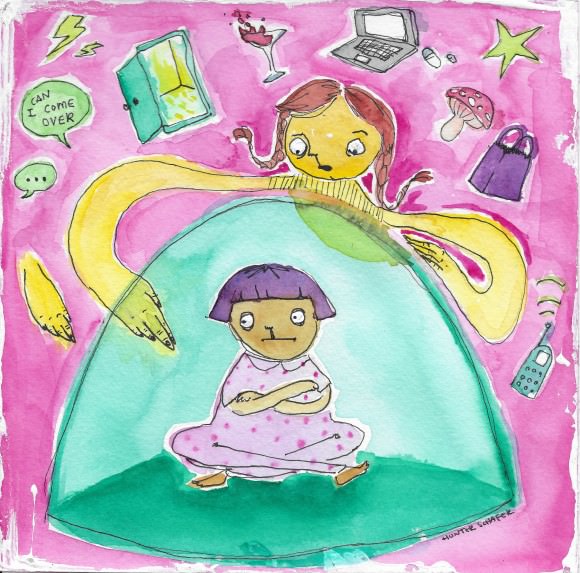 A self-professed loner, Paige* often confided in me that I was one of her only friends, her biggest support in the world. We were both big fans of the graphic novel Ghost World, which follows two girls who bond over their mutual disdain for everyone else. Our friendship—like Enid and Rebecca’s—felt special and exclusive. It was us against the world. I’d always admired Paige’s carefree spontaneity, and she was my go-to friend when I wanted to have a good time. When we got our driver’s licenses, we’d go cruising around the neighborhood, blasting the Arctic Monkeys (one of our favorite bands) and taking turns standing up through the sunroof. She didn’t judge me for wanting to do clichéd “teen movie” activities, or stupid, fun stuff. I found our lack of boundaries, at first, totally charming.

As we entered senior year, our personalities started to diverge. I was working and spending time with other friends, but Paige remained isolated. When we went out, she rarely interacted with anyone but me. She’d interrupt my conversations with others to talk about how much she needed me, and list the reasons why she hated the people I was growing closer to. Everyone I knew had cut ties with her, but I had convinced myself that, because of their cruelty to her, my role as her friend was even more vital. When I couldn’t hang out with her, Paige would chastise me for being emotionally distant. Eventually I started to believe that I was being selfish and cruel by having other commitments.

Paige would also come over to my house uninvited, which I could deal with at first—it seemed sweet, that she was willing to drop everything if I needed help or comfort. Eventually she came over even when I had told her not to come, when I was working, or spending time with my family, or when I wasn’t home. Paige was not being particularly kind to herself during this period and I was worried sick about her. But I also had a lot of my own issues, and I was dedicating so much of my mental energy to her that I wasn’t taking care of myself. Peer pressure is latent and insidious, and by constantly worrying about Paige I was letting my depression and anxiety run rampant. When she called, my anxiety skyrocketed, and her disregard for my mental and emotional needs took a huge toll on my health. I started self harming during this time to cope, and I’m still trying to break that habit.

Anyone who has had a clingy friend knows what I’m talking about when I say I constantly felt like an asshole: I felt selfish for wanting to be away from my friend, and that any time I spent on my own counted as a time I had abandoned her. Feeling misunderstood by Paige, I began to seek advice from other people. My family and other friends reassured me that my need for distance wasn’t selfish; I finally understood that, while Paige acted under the pretense of caring about me, many of her actions were motivated by her own desires for company and support, and had very little to do with me. I had tried to gently let Paige know what I needed, but she tended to agree in the moment yet disregard my needs later. Before I finally confronted her honestly, she constantly guilt-tripped me for taking time away from her to take care of myself. As much as I cared about her, and still care about her, Paige was manipulating and disrespecting me, and I don’t feel bad about setting things straight by letting her know I needed my own space.

It took a very long time for me to confront Paige. I regret not having made myself clear earlier, and tacitly condoning her actions for so long. But this is also an incredibly difficult task: How do you tell someone you love that you need time to love yourself? Once I’d ended my friendship with Paige, I looked back on all the tactics I’d used to make my needs clear, so that in the future I’ll know how to handle this situation. Here are a few things I learned:

1. Don’t make one-time excuses.
If you really have a problem with a friend who hasn’t been respecting your space, you won’t be able to establish those boundaries with one-time excuses. I was too afraid to confront Paige directly about my discomfort because I thought I would hurt her. Instead, I collected an armory of one-time excuses to launch at her: “I have to finish an assignment for class,” “I have a doctor’s appointment,” “I have to babysit,” etc.

Of course, since these excuses were only good for one occasion, I had to keep coming up with lies. They got me out of having to meet up that day, but made Paige doubt me (in “the boy who cried wolf” style) and spiked my anxiety. I was so worried about Paige finding out that I was fabricating my schedule that I would isolate myself in my house to avoid bumping into her and having to explain why I wasn’t at the library, or working, or with my family, or whatever excuse I’d used that day.

Clearly, this method did not work well. Lying constantly to avoid hurting someone’s feelings is not healthy, for you or the other person. Eventually, my friend began to seriously doubt my excuses, and began coming over anyway; I remember feeling panicky when at one point, after pretending I had the flu, she told me she was coming over and that she didn’t care about getting sick. OK, Plan A failed! In making up this whole other life, I’d avoided dealing with the actual problem, confused my friend, and given myself more unnecessary stress than I’d had originally. White lies can be useful tools every once in a while, but they shouldn’t become routine.

2. Throw your family or guardians under the bus.
This sounds mean-spirited, and a little inconsistent with the tip above, but it works very well, if you find the right wording. My parents have always said if I ever need to get out of a situation, I can use them as an excuse by saying “My parents want me to come home right now,” or “My parents would be pissed if they found out about xyz.” You don’t need to have a good relationship with your family to use this excuse; your friends are unlikely to confront your guardians.

Simply saying, “My parents/family/siblings/chihuahuas don’t like me spending time around you” gives you a watertight reason for claiming space; your family’s outright discomfort with your friend is hard to argue with. Also, this isn’t an excuse you’ll have to use repeatedly; instead of making up specific excuses, like I mentioned above, this is a very effective one-use excuse. Your friends will defer to your family or guardian’s authority, since if they don’t feel like you are safe with your friend, how can your friend argue: “What do you mean, you don’t feel safe around me? Hop in my rickety car for a ride around town, I had the seat belts replaced with string cheese!”? Counter any protestations with the bitchface of your choice, and they’ll probably be mortified and leave you alone.

3. Make it about you.
If using your family as a reason for your friend to respect your space doesn’t work, but you are still concerned about hurting your friend’s feelings or salvaging your friendship, you can make the situation about yourself. When Paige became too stifling, I confronted her in a way that put more responsibility on me than on her. During this kind of conversation, focus less on your friend having disrespected you, and more on simply stating your own needs. I made my situation clear to Paige by telling her about my anxiety: I told her I knew she was just trying to be a good friend, but that I needed to look out for my own mental wellbeing. I reiterated that it wasn’t her, it was me. This way, you can assert what you need without making your friend feel like they’ve failed you.

Unfortunately this didn’t work for me and Paige: I had to move on to the next (and most decisive) tactic.

4. Confront them honestly.
I put this last on the list, but it is the most effective and courteous approach, regardless of whether you want to break up with a friend or just set a firm boundary with someone. Texting or emailing your friend to say you want to talk to them IRL is a good way to initiate the conversation, especially if they typically have trouble listening to you. This will also avoid your friend feeling like you are springing these issues on them. Find a private place to discuss their behavior, especially if the conversation involves a lot of personal details.

Set this part in stone: Your friend may try to convince you that you are being irrational or selfish, but while I know you all are great people who care about your friends’ feelings, you need to get the point across that yours matter, too. A list of grievances could make them feel attacked, but if you frame it as why the friendship isn’t working instead of a judgment of their character, hopefully they will not get defensive.

Paige put far too many expectations on me, and our friendship dissolved after she accused me of being “emotionally unavailable” when I’d tried to give myself the space I needed. While I’m sad that we couldn’t keep our friendship afloat, I don’t regret breaking it off with her, because friendships are supposed to be give and take. No one, on either side, should do all the heavy lifting. ♦

* Not her real name