A dreamy new video, plus a chat about inspiring spaces (real and virtual).

How to Turn a Plastic Container Into Jewelry Charms 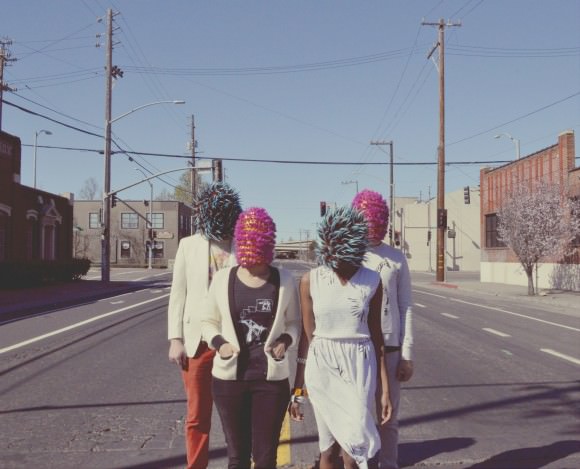 The Oakland-based band Bells Atlas describe themselves as “Afro-soul rhythm pop-sicles”—the offspring of a “gospel choir” and a “space station on Mars.” Sandra Lawson-Ndu, Doug Stuart, Derek Barber, and Geneva Harrison met four years ago, and they have merged their various histories and influences to create a multidimensional sound that testifies to the magic of loving collaboration, which you can also see in this video for the song “Sides”:

In anticipation of the video’s premiere (which is happening right now!), I talked with Geneva and Sandra about their songwriting process, what it’s like to live in Oakland, and art consumption.

MADS: How did Bells Atlas come together?

SANDRA LAWSON-NDU: The bass player, Doug Stuart, and I started playing music together pretty casually. After a while we decided we should share it with people, and it became the two of us with a loop pedal. We wanted to add some other [band members] so we played a show with Doug’s friend from college. Geneva saw us, and imagined [the band with] drums. I guess what we were doing wasn’t sufficient!

GENEVA HARRISON: What? No!

SANDRA: Geneva came in, and it worked beautifully.

What were some of the most challenging aspects of entering the music industry as a collective, and then individually, as women?

GENEVA: I feel like the majority of people I’ve met in the music industry are women! I would say I’ve met more women than men. Do you feel that way?

SANDRA: No, not necessarily, but I don’t think that it has to be one way or the other within this community.

GENEVA: Being a woman hasn’t really been that challenging, but being a female musician has been a bit different. For example, I’m teaching at a jazz school right now and there are no girls in the program. It blows me away! Where are the girls? I’m the only female in the entire program, which is crazy!

SANDRA: But within this project, being a woman doesn’t feel like a challenge.

GENEVA: We’re very diplomatic being two women and two men. But aside from that, things like business matters or hoping that our music reaches the right people have been rough. It’s always exciting when you find people who really appreciate your music, or they find you and they express their excitement over what you’re doing. It’s extremely inspiring to have those conversations. But there’s SO much great music out there, and so many people making that music. It’s tough to feel like you’re being heard.

What’s the process of transforming songs from ideas to full-bodied entities like?

SANDRA: For our first and only LP, Doug and I had started writing a lot of the songs already, so Derek and Geneva came on and added their creative touches. Our newer material has been more collaborative, and when you work with four people, that can be a little complicated, but also very exciting. Different songs have bridged from different starting points. For instance, sometimes we just jam and connect to one moment for the tiniest second within that 30-minute jam. It could become a song as we suss out parts, but I definitely like to take things back to write lyrics in my own space.

GENEVA: It’s become way more collaborative since the last album. Sometimes someone will have a little idea or demo that they’ll bring to the group and we’ll flesh it out. Doug, Sandra, and I have been having a lot of songwriting sessions and getting songs into cohesive states so Derek can add his wild card effect. Sometimes one or two people come in with a very skeletal idea; recently we’ve been trying to write without having to get too caught up in the details. There’s no shortage of ideas in this band. There are so many gems that everyone brings to the process, but it’s really a matter of how to arrange that and filter things. Sometimes you gotta keep the gems for later! 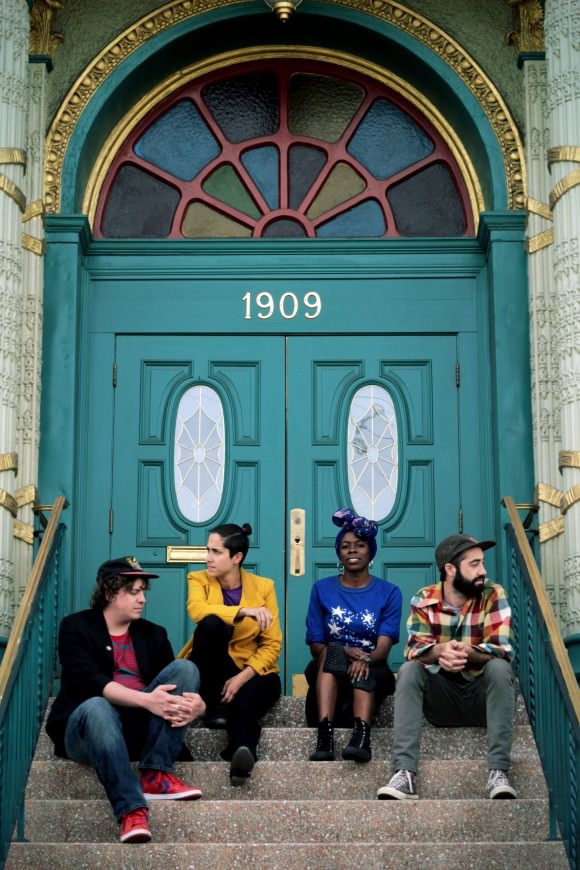 How has living in Oakland influenced you and your music?

GENEVA: Oakland isn’t a huge city, but it does have a pretty active community of people going to shows or going out dancing. Here you’ll be driving down the street and not realizing that you’re passing all of these places that, from the outside, don’t look like much, but are actually these incredible things happening [inside] that aren’t as obvious. Oakland doesn’t necessarily want to flash its special places to the public.

SANDRA: But every so often it flashes, and all of a sudden Oakland becomes Wonderland and is full of people and then it goes underground again.

GENEVA: That underground element is changing as a result of San Franciscans moving over to cash in, but there are also loads of great local businesses.

SANDRA: The pop-up world exists quite a bit because there are so many spaces to utilize. I find that really exciting.

GENEVA: More than anything else, I love how diverse Oakland is. That [diversity] brings so much to the table, and I truly think that no place in the Bay takes the cake like Oakland. There are so many well-supported communities and cultures, and it’s beautiful to see that.

SANDRA: I like that question! The most obvious response is that we’re all coming from different places, but I think that Oakland is a city where people can come from different places and have the space to make things together; it inadvertently breeds creativity. I know it influences me lyrically, and it’s impossible for it not to be swimming within what we create.

GENEVA: Naturally we’re drawn to this place because it supports that element in us. Bells Atlas is encouraged by Oakland. We are absolutely multidimensional, but we are able to keep doing what we’re doing because it resonates with the city and the people in it. It creates this give and take.

I always envied those people who could flow in and out of environments and, seemingly effortlessly, could remain entirely themselves, mentally well and unchanged in their productivity. While I think adapting is really interesting and fun, changes in atmosphere have such drastic impacts on what I create and my wellbeing.

SANDRA: Definitely! I lived in Miami for a number of years and it’s interesting to see a lot of the music that my friends made there. There’s a certain attitude or vibe in the music that came from Miami, and they’ve maintained that as some of them have branched out. But others get a bit lost in their travels.

What have you guys been consuming, particularly in the realm of art, literature, and music?

SANDRA: I often return to things, namely Aretha [Franklin]! She’s obviously the queen of soul, but I don’t think I dug deeply enough into her music growing up. I’ve been really loving the new Hiatus Kaiyote album as well as Teebs. As for literature, the book I’m reading right now is a classic called Palace Walk. But aside from going out and purchasing books that I’m interested in, it’s crazy how much art you’re unintentionally absorbing through social media. Art is constantly flashing online at such a high speed. I guess there is the art that I have one-second exposure to and there is the art I consciously seek out.

GENEVA: I’ve been listening to Björk almost every day. I’m also listening to a bunch of Teebs, jazz, and a few randoms. I read very slowly, but I tend to love books about science and music. [The English music journalist and author] Simon Reynolds is incredible, as is this Japanese American astrophysicist called Michio Kaku—he has awesome insights into cosmology and the future of things. I also tap into music, culture, and philosophy through the website Brain Pickings; that site always has incredibly insightful stuff. As far as art goes, I follow Motherboard and Colossal. The girl who did our EP cover, Sophie Roach, is based out of Austin, Texas. She has [so much] patience in her work.

SANDRA: Okayafrica also post a lot of contemporary African art. There is so much interest in the history of African art, but it’s always interesting to see the contemporary art coming from West Africa and southern Africa.

GENEVA: There is really cool photography, artwork, and fashion coming out of Africa that doesn’t get enough exposure in the states!

GENEVA: And the perception of what that is so rigid!

SANDRA: Kara Walker is an incredible artist. In Brooklyn, she had this installation in a sugar factory that everyone should check out [online].

What are your plans as a band for the coming months?

SANDRA: It’s difficult to keep up with your own content through releasing music at a pace that feels relevant to the world at a given time. We want to make as much as we can and release it as fast as we can.

GENEVA: Keeping up the momentum is the goal! We’re playing a lot this summer and trying to do a tour in November.

SANDRA: A music video, too!

GENEVA: I guess we’re trying to do it all. Maybe by the end of the year we’ll find a creative incubation where we can just focus on one thing. But for now we’re enjoying the insanity. ♦