Why Can’t I Be You: Sana Amanat

“Comics can be and should be for everyone.” 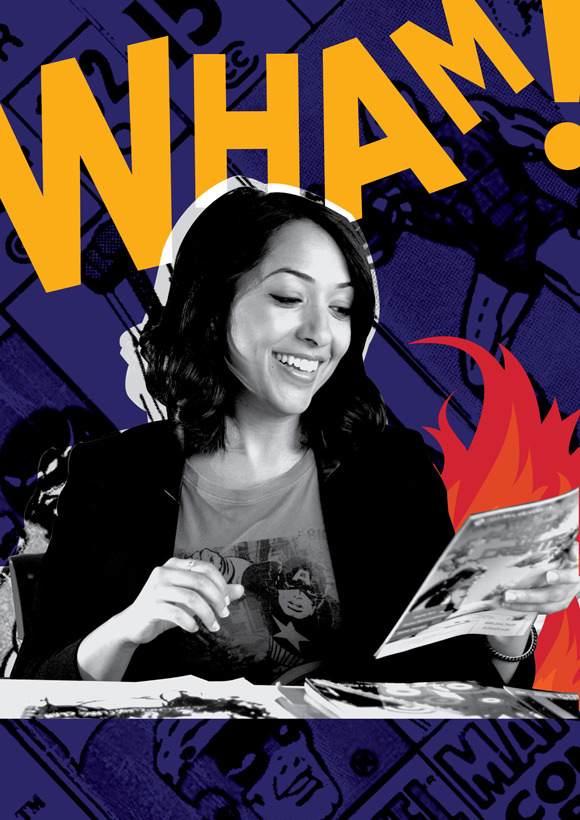 Collage by Ruby A., using a photo by Jacob Pritchard.

Sana Amanat is doing groundbreaking things at Marvel Comics, one of the world’s biggest comic book publishers. As a comic book editor, she helped create the character Kamala Khan, aka Ms. Marvel—Marvel’s first American Muslim teen character to have her own recurring series. Sana also is one of the amazing people who worked on Ultimate Comics: Spider-Man, which features Miles Morales, a black Latino Spider-Man.

Growing up as a Pakistani-American Muslim kid in New Jersey, Sana remembers feeling different from her peers. She found solace in watching the X-Men series, because she identified with the mutants’ struggles and experiences. I talked to Sana about getting her dream job as Director of Content and Character Development at Marvel, creating Ms. Marvel, and the kinds of challenges she’s faced as a woman of color in the white dude dominated world of comics.

MARIE: You’ve just become the Marvel’s Director of Content and Character Development, and you’re still working as a comic book editor. Can you tell us exactly what you do at your job?

SANA AMANAT: There are a few different aspects to this new position. I’ll continue to serve as an editor in a smaller capacity on books like Ms. Marvel and Daredevil. An expansion on that will be developing content and projects geared towards our emerging audiences, and evaluating what content would connect with that particular readership.

The larger role will be focusing on the franchises that we’ll be developing across all our divisions, and making sure all of our divisions—publishing, TV, animation, films, games—are coordinating with the larger vision.

This all translates to one larger mission for me—connecting Marvel content and characters with as many audiences as possible. Reminding people that Marvel is the meeting ground for every kind of fan of great stories.

In your TEDxTeen talk, you mention that X-Men was one of the first comics that you loved as a kid, and you connected to the characters because they were different and misunderstood. Was there a specific character that you most identified with?

It’s always hard to nail down one specific character—so many have resonated with me in different ways. However, there was something in Rogue that I loved in particular. She is wise-cracking but vulnerable, and despite how difficult things become for her, she remains strong and determined. As a young kid, I could connect with that—the doubt, the uncertainty, but the desire to always find a laugh somewhere within it all. Also I want to give a special shout to Storm because, well, STORM.

Were there any other comics or books that you read as a teenager that you felt a kinship with?

Archie Comics, of course! That’s where my love of comics in general really started. It’s all about a group of friends who were silly and lovable amidst their teenage drama. I still love those kinds of stories and try to imbue things I work on with that sensibility.

When did you realize you wanted to be a comic book editor, and what path did you take to get there?

I’ll be honest, I never realized you could be a comic book editor if you chose to be! I had daydreamed about the idea, but always thought of it as something implausible. How would you even begin? Fortunately, I knew I had a love for publishing and I interned at a few magazines, eventually getting a job with TIME magazine out of college. From there, I took on a few different jobs, in marketing and editorial, but all publishing-focused.

When an opportunity arose at an indie comics company, I jumped at it. That was where I got my real start in the industry, getting trained by a fantastic former Marvel editor named MacKenzie Cadenhead, who really gave me the necessary skills to craft stories within the medium of comics. I met some wonderful people at Marvel, who have been so supportive of me and my career, eventually getting me to where I am today!

If one of our readers wanted to write or draw their own comic, how should they start?

First of all, they should dive all in! Web comics’ presence has increased significantly in the last few years because there are so many talented creators out there with unique voices. So if you have a story, put it together and post it!

Where do you actually start, though? With the pitch. What do you want the story to be about? Who do you want it to resonate with? Grabbing onto the central metaphor—the main pitch for the story—is the ground floor of storytelling. From there you add on all the other elements—main characters, environment, conflict. If you’re a writer, find an artist to work with, and vice versa. There are plenty of networking opportunities at conventions and online spaces where you can connect. Either way, don’t wait, your creative energies must be released!

What are some of the challenges you’ve faced as a woman and a person of color in a male-dominated industry?

Doubt. Doubt from others, doubt in myself. The problem with working in an industry where you are very much perceived as the minority is that there may be some people who don’t believe in your capabilities, or your understanding of the medium itself. I was an outsider in every way. Physically, sure. But I also didn’t grow up with the same sort of history with comics that many in the industry had. There was this perception that comics had to be told one way, for a specific kind of reader—and that created a lot of doubt on my part because I never felt like I could measure up to others’ standards. But after a while, and with some great supporters here at Marvel, I realized I shouldn’t. Comics lend themselves to inclusion and diversity. They can be and should be for everyone, and that’s why with every book we work on, we hope that message comes across.

You co-created Ms. Marvel, the first teen American Muslim superhero with her own monthly series. Can you talk about the various responses you got when you introduced the character?

The larger idea resonated with a wide audience—not just Muslims, or women, but anyone who championed the idea of diversity in comics and diversity in the media at large. On the other hand we also had a lot of expectations, some thinking that I would address all issues affecting Muslims, others so excited about the concept that the story itself was getting lost. I did have a few people saying it was a PR gimmick, or that we were pushing the “Muslim agenda,” but I hoped once they read the comic they’d change their mind. When you do something like this, negative reactions will always surface. People are afraid of what they don’t know, and angry when you try to change what they’ve treasured for so long. But to that I’ll say, we aren’t trying to take anything away, just trying to show how wonderful these characters can be in a slightly different light.

How do you see the future for women and people of color in the comic book world?

I see them being bigger power players in companies like Marvel. Marvel has always supported a push for diverse voices on all sides of the business, and that has come across in particular in the past few years. In a few years, as both our stories and creators become more diverse, I expect that to become industry standard. Let’s get to a point where we don’t need to have the conversation any more, where we can be supportive yet challenging of one another, to create the best, the most exciting, the most inspiring stories we can. ♦