A Girl Without a Country

I didn’t feel like I belonged in either of my homelands. 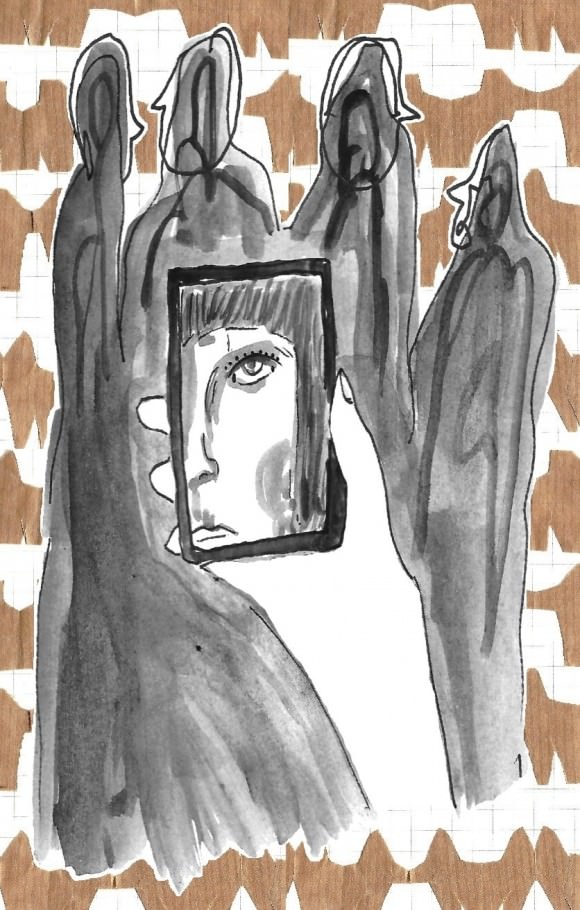 My first name, Upasna, didn’t seem so complex, so different, until other people had trouble with it. As a kid, it made me feel displaced and rejected when my classmates laughed at my name, and when my teachers struggled to pronounce it before giving up and avoiding it. People were always curious as to whether I had a nickname. I didn’t, but l made one up that was just three letters short in kindergarten: “Upi.” Despite that compromise, my classmates still smirked scrunched up their faces in disdain during roll call. I asked my mother if I could change my name, desperately hoping for something a bit more familiar to my peers. I thought it would be easier to make friends: It seemed that people liked what they already knew, and that definitely didn’t include a name like mine, or the person attached to it.

No one in my class tried to correctly pronounce my name, ask its meaning, or even just accept it without commentary. lt seemed to set me apart as a kid that wasn’t worth the extra effort to make friends with. At recess, l didn’t play with my classmates. Instead, I sat in the grass, wishing that I could meet someone new—someone I could lie to about my name, or maybe even someone who wouldn’t judge me about something so unimportant. That lack of effort seems to me now to be kind of like saying that you’re “bad with names,” a phrase I completely disagree with. If you make the choice to remember, you will.

Due to my mother’s financial struggles as a single parent, we moved to India to stay with my grandparents when I was nine. I was extremely relieved to be given a new start among people who wouldn’t think it was strange to be called Upasna, and I tried as best l could to adapt and learn Hindi as a second language within a few short months. Though my new set of peers didn’t bridle at what l was called, other language issues arose: By the second week of school, I was sick of people asking me to repeat myself and telling me that I spoke the wrong way. My struggles with even the simplest words, like man, girl, and sir, elicited the cruelest reactions from my classmates. During poetry recitations in English class, sometimes these comments took the form of absentminded corrections to my pronunciation. Other times, they were muffled in giggles at my inability to speak the “right” way. “Americans,” one kid muttered after a teacher corrected my non-Anglicized spelling of favorite in front of the class. “They’re good for nothing. So bloody stupid.”

I redoubled my efforts. l spent my weekends watching Indian movies and picking up simple phrases and even swear words. I decided to grow my hair out so it would be long and luscious, like all the other girls’, and begged my grandmother to braid it every morning. I stopped packing “American lunches”—cut-up sandwiches, crackers, chopped salads—and carried a tiffin packed with rice and rotis, a kind of Indian bread, to school. I wanted to completely assimilate into the Indian culture, because, based on what l observed in America, I thought that being like everyone else was the easiest way to make friends—to make people feel comfortable enough to want to get to know you. Everything I did was still all wrong.

My American accent guaranteed my mispronunciation of all of the Bollywood actors’ names. I got lice in my new long hair for the first time (gross) and had to invest in special debugging shampoo (and a haircut). Despite packing Indian food for lunch, I wasn’t able to eat the “Indian” way: I couldn’t pick rice up with my fingers easily, and I hadn’t mastered the oh-so important technique of using one hand to tear my rotis for my curry. My classmates rolled their eyes, laughed, and looked at me with pity. What was I supposed to do to convince my classmates that I fit their idea of normalcy—dump my American passport in the trashcan?

In the sixth grade, one of my classmates came up to me and asked me if I had slept with one of the boys in our grade.

“What?! No! Of course not!” I responded. I didn’t exactly know how to react: I was scared anything I did or said would be read as suspicious, and I didn’t want people to have one more reason to dislike me or find me strange. The girl proceeded to tell me one of our other classmates claimed she caught this boy and me naked in bed together—and that I had a big, fat tattoo of a butterfly on my ass.

“Americans do dirty stuff like that, anyway,” she added. “It would be hard for me not to believe you didn’t do any of it.”