It’s Not About You

The Nature of Friendship 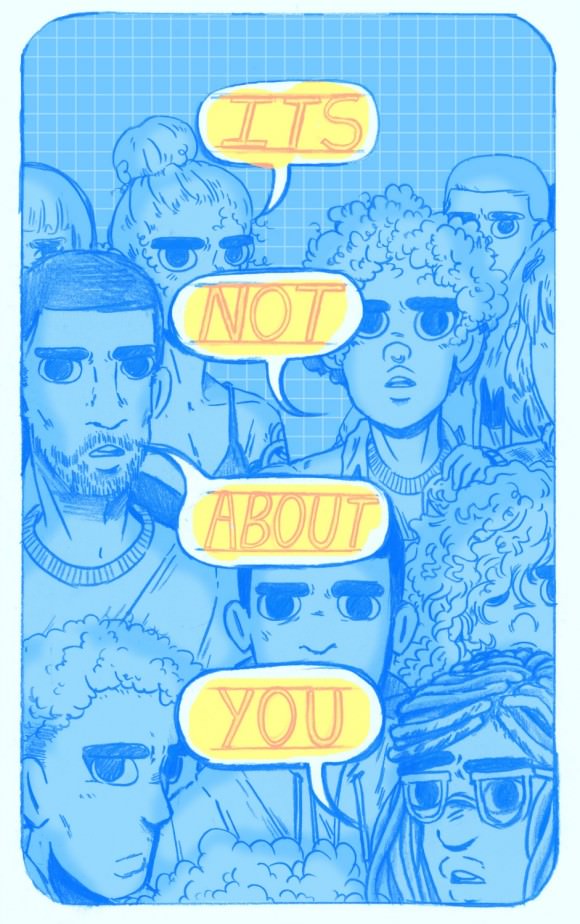 When I was maybe four years old, my mother bought me and my older sister black Barbie dolls. Both of us rejected them outright because “they weren’t the dolls from the commercial.” We didn’t think they were good enough, and certainly not as good as the blonde, white Barbies our friends had. We weren’t born thinking that way. We learned from watching regular old TV commercials that only included the coveted features of white Barbie. But since the age of four—before I could read—I knew that blackness was considered less-than and different.

During the wildly successful Blackout Day of March 6, black people posted and reblogged selfies on social media to promote community and the acceptance of features less visible in popular media. It was an uplifting day meant to remind black people, “you’re beautiful, too.” Some white people took offense. It wasn’t long after #BlackOutDay started trending worldwide on Twitter that the ‘whiteoutday’ hashtag became a thing.

Blackout Day did not claim that non-black people are immune to body image issues, or that others don’t face societal pressures. But, without fail, any time a historically oppressed group asserts their equality by boldly denying any inferiority to someone outside their group, some member of the un-oppressed majority takes it personally. Well, when oppressed groups take the initiative to lift themselves up, it is not an invitation to victimize yourself. Would you go to a toddler’s birthday party and kick over their cake to announce that you, too, have birthdays? The answer should be “no.”

If we really examine the society we live in, the magazine aisle of any store, or any TV channel—the images we are most exposed to are overwhelmingly of white people, all the time. Sure, there are a handful of popular shows that feature diverse casts, and black people do appear on the covers of magazines from time to time, but let’s be honest about the harsh reality. It is highly unusual for features more commonly possessed by people of African descent to be considered beautiful.

Popularized by the psychologists Kenneth and Mamie Clark in 1939, the “doll test” showed that the way we see ourselves is largely dictated by the world around us. In the test, a child is presented with a white doll and a black doll and is asked to associate characteristics with one or the other. White students mainly associated the black dolls with negative traits, and shockingly, black students did, too.

Growing up in Florence, Kentucky, one of the least diverse places in America, I was constantly struggling to look a way that I’m really just not supposed to look. People would make fun of my skin color, my hair texture (even as I tried to assimilate to their straight hairstyles), the size of my butt and lips. It’s shocking to see how positive a reaction certain white celebrities get for possessing those features, while they are shamed when they appear naturally on my own face and body (looking at you, Iggy Azelea).

My story is not unique. Our society still has loads of unlearning to do when it comes to racist and damaging stereotypes. Racism is more than hurting my feelings, it affects the way the gatekeepers of the world—employers, educators, coaches, landlords, the entire infrastructure—sees and treats me. And there are huge privileges in passing as white in a world that values lighter skin above all other shades. Representation matters, and seeing people who look like you in media not only affects the way you see yourself, but the way others see you.

So yes, I get that it may feel like an affront that black people are spending a day telling each other that they are beautiful and worthy and interesting and deep and lovable (especially if you don’t feel that way about yourself), but imagine the other 364 days a year that we face major barriers to mainstream acceptance because we are black.

A knee-jerk reaction would be to say, “But I THINK BLACK PEOPLE ARE BEAUTIFUL!” or, “I’ve played with Black dolls, I watch Scandal, and I am not a racist! So why do you need a special/separate/entire day?”

It’s a hard lesson to learn, that the struggles of black people, gay people, trans people, poor people, disabled people, might be different than yours. I learned this lesson myself a few years ago, after reading a post on Tumblr where the writer joked about disliking heterosexual relationships. I was immediately taken aback. I considered myself an ally of LGBTQ+ communities, and found the laws banning people in love from getting married lamentably archaic. Still, I couldn’t believe that people with different sexual orientations were making light of me, a straight person. My life isn’t perfect! I am not rich and I am Black! How dare you make a joke at my expense?

I talked to a good friend of mine who is an out lesbian very involved in the gay community in my city. I was taking the Tumblr post personally, I think I even said ::shudder:: “If a straight person said the same thing about gay relationships, that’d be homophobic!”

Yeah, Akilah, it would be hella homophobic! And homophobia is a real problem, whereas being straight is not a problem at all. I have all of the advantages of being a straight person in a world that overwhelmingly supports straight marriage and spousal rights, and overwhelmingly denies personhood to anyone with a different sexual orientation or who identifies as a gender outside of the one they were assigned at birth. Homophobia is a problem with tangible consequences; someone joking about straight people really isn’t.

My friend was smart and patient. She simply asked, “Did you lose anything when they lifted themselves up?” and I thought really hard about it. The world hadn’t changed. I wasn’t somehow disadvantaged because queer people asserted their right to exist. I didn’t lose my right to marry, or suddenly have slurs hurled at me about my sexual orientation.

Realizing that their gay pride didn’t take away from or negate my lived experience helped me grow up so much in that moment. I saw the other side of the argument and they were right. And while I don’t condone making fun of anyone, I certainly do not think it makes much sense to equate my personal situation with the centuries-long history of oppression that anyone who isn’t heterosexual carries on their shoulders.

Since that conversation, I’ve learned to listen before I follow my knee-jerk reaction and take offense at movements about which I’m not educated. It isn’t always easy to stop the instinct to be defensive, but it is necessary if things are ever going to get better. After really hearing the other side, ask yourself if anyone loses rights or status when that group gains theirs. John F. Kennedy said, “A rising tide lifts all boats.” It’s important to remember that sweeping progress benefits us all, so let others do what they must to finally achieve equality. ♦