I wish someone had told me when I was 13 that it was OK to be a monster. 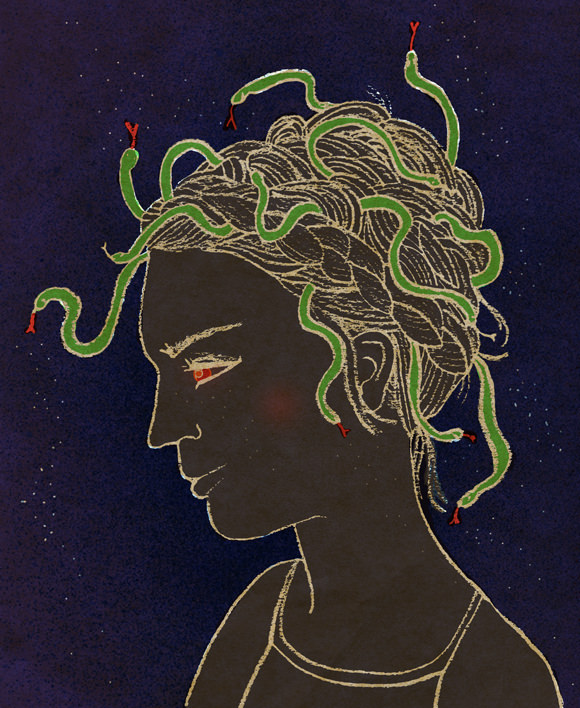 “I am writing as an ugly one for the ugly ones,” Virginie Despentes begins her 2006 book, King Kong Girl. “The old hags, the dykes, the frigid, the un-fucked, the unfuckables, the neurotics, the psychos, for all those girls who don’t get a look in the universal market of consumable chick.” I read the book in 2013, the same year I was devouring classical Western mythology through writers like Ovid. At the same time, Rookie writer Arabelle Sicardi was building and blogging what she called “girl monster methodology,” an exploration in terrifying beauty and opting for vulnerability and monstrosity over classical prettiness. It was the year I found women who were writing about and representing what I was always looking for: in King Kong girls, in monster methodology, and in Medusa.

The myth of Medusa goes thusly: She was a beautiful woman who garnered many suitors, but after being raped by Poseidon in Athena’s sacred temple, Athena decided to curse Medusa with snakes for hair. The legend asserts that she was so horrific-looking, men turned to stone when they looked at her. Medusa, for me, began to represent the double-edged sword I’ve been faced with when I try to understand beauty. When she was gorgeous and sexually desirable, it only led her to be cursed with an ugliness so terrible it killed men in her path. She represented how female beauty can only exist in the strictest of ways, and when it fails, ugliness, and therefore monstrosity, is the inevitable outcome.

I’m not sure what kind of girl I am. I wish I could say I knew for sure—that I could put a name to my feelings like Despentes and Arabelle have. But for the entirety of my teen years, I sincerely thought one thing: I was not a pretty girl. In fact, I was sure I was definitively ugly. And while I possess what is, by mainstream standards, a celebrated body (white, thin, cis), the moment I grew out of childhood I became someone whose existence was deemed unacceptable by an influx of seemingly invisible standards. I failed to make the smallest marks: I felt like my hair was wrong; my face was always over-flushed and embarrassed; boys didn’t kiss me, and when they did, they had kissed everyone; girls didn’t want to be me.

In reality, my conviction of my ugliness wasn’t unusual. I was a teenager poking my way around my body, sex, and beauty, all of which is almost aggressively normal, but somehow my failures to be traditionally pretty and desirable made me feel grotesque. But the truth is that every girl has some Ugly in her. It’s because we’re constantly taught not to be. If the girl is acceptable by the standards of the world (and largely of men) she isn’t Ugly, and so it manifests in the corners of our minds and our hearts. The ugliness of Ugly Girls ends up an umbrella for everything we’re not supposed to be: loud, messy, clingy, smart, queer, unshaven, fat, etc. “I think monsters trump the binary of smart and pretty and instead adopt power as the ultimate makeover,” wrote Durga Chew-Bose on ’90s teen movies for Cleo Journal. “Maybe I’m just living in a post Nicki [Minaj] ‘Monster’-verse era where I think it’s important to fully inhabit all of our many contradictions and missteps, and if doing so, we as women become so-called monsters, why not?”

I wish someone had told me when I was 13 that it was OK to be a monster, because the truth is, you’re going to feel like one a little bit, some more than others. And everyone will tell you you’re not one, or that you’re bound to be pretty eventually. But what I wanted was for someone to tell me not just that I was fine just the way I was, but that there was something more to attain than just prettiness. That the other end of the spectrum, ugliness, could be a source of strength, a way to turn the men who could merely objectify me into stone simply by existing in a way that didn’t meet their sexual expectations. “I am writing therefore as a woman incapable of attracting male attention, satisfying male desire, or being satisfied with a place in the shade,” wrote Despentes of her ugliness. “It’s from here that I write, as an unattractive but ambitious woman, drawn to money I make myself, drawn to power, the power to do and to say no, drawn to the city rather than the home, excited by experience and not content with just hearing about it from others.”

I can’t tell anyone, especially people with bodies maligned in ways that mine will never be, to reject sexiness and embrace ugliness. But for me, I love this ever-growing space. I needed Arabelle’s monsters and the King Kong girls and Courtney Love screaming “Is she ugly?” over and over on “Pretty On the Inside,” like a war cry. It’s not a place of self-love and it’s not a place of self-hate—it’s between the two. It’s basking in the feeling of being perceived as a monster. It’s a celebration of all of your unruly parts, the parts you keep untamed, the parts you don’t have figured out. If anything, it’s an attempt to escape the scale of fuckability that you’re automatically placed on as a young woman. “Beauty is, in some way, boring,” the art historian Umberto Eco wrote in his book On Ugliness. “Ugliness is unpredictable and offers an infinite range of possibility. Beauty is finite, ugliness is infinite like God.” ♦