Two best friends interview each other about the place that brought them together.

How to Wear Flowers in Your Hair 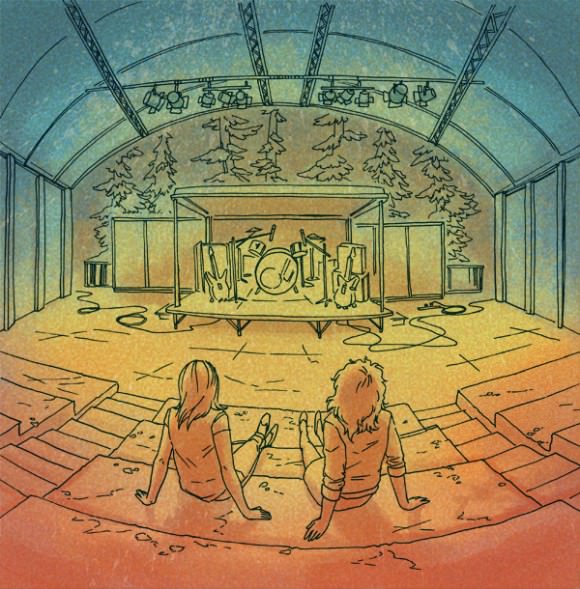 Thanks to my cat ears, cape, and whole-hearted conviction that I would one day wake up to discover I WAS Sailor Moon, one could say kindly that I stood out in my rural public middle school. Unkindly, one could also say I was sort of a seventh-grade pariah. Luckily, my mom saved my life by sending me to Buck’s Rock, an ultra-liberal, choose-your-own-destiny summer camp dedicated to the creative and performing arts, at which my cat ears actually made me kind of cool. At Buck’s Rock, I started writing and recording songs, playing in bands, acting in plays, and dabbling in all kinds of visual arts I’d otherwise never have access to—like metalsmithing! It was an incredibly formative place for me. I attended as a student for four years, and when I was a bit older, I went back to the camp as a music instructor, and ultimately became the head of their music department.

Working at Buck’s Rock as an adult, the affirmation of just how explosively bright these kids were was sustaining—and it made me realize that the pride I felt for my talented friends when I was a camper wasn’t just nostalgia! As a camper, I’d developed close friendships with many of the counselors. And once I was a counselor, I became very close with a camper named Ellen.

Ellen Kempner, 20, is best known as the guitar-slingin’ mastermind behind Palehound, one of my all-time favorite bands, but she’s been a star to me since she was a 12-year-old. Even though she’s six years my junior, Ellen is my best friend and roommate, and in a few weeks, she and Palehound will come on tour with my band, Speedy Ortiz. At home, we spend a lot of time sitting around on our ultra-plush couches and talking—about bands we like; the ever-frightening daily news; who makes the best curry in downtown Allston; our crushes on fictional TV Olivias (Benson for me, Pope for Ellen). But never before have we talked in depth about our friendship. Until now!

SADIE DUPUIS: When I was 19, I spent a couple of weeks volunteering at Buck’s Rock, helping to put on the tribute show—the year’s theme was the ’90s. I remember you singing [Pearl Jam’s] “Jeremy” and thinking, That kid is fucking amazing.

ELLEN KEMPNER: To be honest, I have very few memories from meeting you at Tribute Show. I recall being sad when you left because we hadn’t had really any time to hang out.

SADIE: Most of my first memories of you are from two years later, when I came back to work at the camp’s music department full-time. I remember hanging out at your bunk, Girls’ Terrace, when I was on assist, which was basically glorified babysitting once lessons were done at the camp—sort of to make sure kids weren’t sneaking off to make babies in the nighttime, or whatever.

ELLEN: I think it was 2009? Honestly, these memories of getting to actually know you that summer are probably some of my best teenage memories. Whenever you were on assist, I would blow off all events for that night to hang out with you.

SADIE: Oh no! I feel like a bad influence.

ELLEN: It was always the highlight of the week. One night, it was raining, so we sat on the porch and you showed me a bunch of music on your computer. The standouts were My Bloody Valentine and Liz Phair. At the time, I was listening to happy indie pop like Regina Spektor and Ben Folds.

SADIE: I remember that night, too. We listened to an Autolux cover of “Helter Skelter” a million times.

ELLEN: I was an angsty, sad girl, so when I heard the music you showed me, it felt like I had finally found what I was supposed to be listening to. I think I still have the piece of paper that I wrote your recommendations on at my dad’s house.

SADIE: You’re the oldest child in your family, and I’m an only child, so I’ve always sorta felt like a big sis to you. That’s one of the cool things about older siblings—they show their younger ones cool bands. Nobody really did that for me, so it’s been nice to be able to share things with you.

ELLEN: You and I developed this sisterhood from the get-go. I felt a protectiveness from you that reminded me of how I feel towards my younger sister. I had always wondered what it would be like to be a younger sister, and being with you absolutely showed me. I told all of my home friends about you and [Sadie’s old band] Quilty. My Quilty shirt was a weekly staple—my “cool” shirt. The highlights of my school year were going to basketball games with you and going to see Quilty play in the city.

SADIE: You were already an insanely talented guitarist and just, like, this beyond-gifted songwriter—so advanced, and so generally mature, that sometimes it was hard to view you as a kid. We had pretty intense conversations about your back surgery, your parents’ divorce, and your friends at school. You were very forthcoming, but had a tremendous amount of self-reflective insight.

ELLEN: In terms of my identity as a queer chick, you were very instrumental in me coming to accept that shit. Mainly because you never gave me that sympathetic “it gets better” bullshit, but more like a “so what?” attitude. When I came out to you—or, more like, when you made me come out to you ’cuz you knew already—you were kind of hilariously pissed because I hadn’t told you.

SADIE: Did I drag you out of the closet? Dan Savage would be so mad at me.

ELLEN: I don’t exactly remember why I hadn’t told you. I guess I didn’t want you to think of me differently, or think that I’d had a big crush on you the whole time. One of the best things you’ve ever said to me was, “Ellen, why the fuck wouldn’t you tell me? Look at the boots I’m wearing. These are not straight-girl boots.”

SADIE: I started identifying as bisexual when I was 14, at Buck’s Rock. At home, I tried to start a GSA [Gay-Straight Alliance] at my public school and got called into the principal’s office for a talking-to about why that was inappropriate. It was nuts. Once I got a little older, and had a clearer understanding of the vocabulary and discourse surrounding sexuality, I started identifying as panromantic and demisexual.

I was never really OUT about my sexuality, other than to my Buck’s Rock peeps, until I was like 20, [which was] around when we became friends. Part of my desire to keep my identities visible had to do with you figuring out your own sexuality, and your anxieties surrounding coming out as queer. I felt terrible that time we talked about your coming out, and you were so worried you would be stigmatized as a musician just for being honest about yourself.