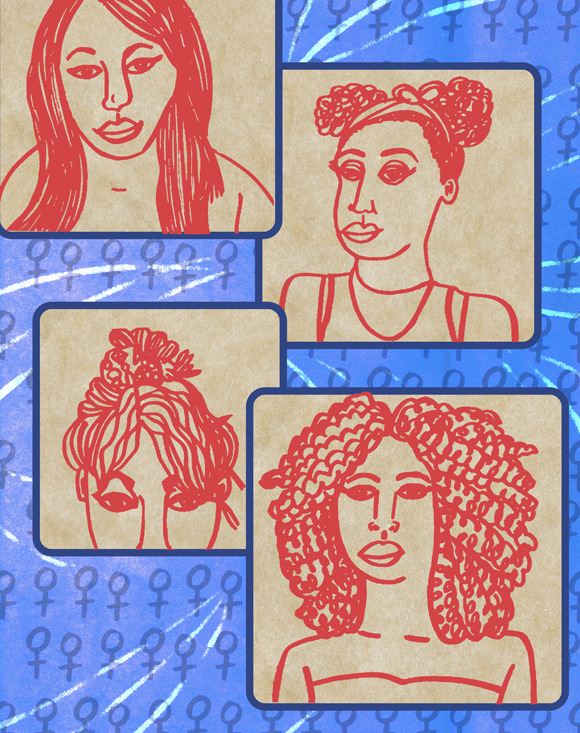 I first heard the word feminism in my sophomore year of high school. It was one of those things; I was aware of the topic, but had no idea there was an overarching word to describe the movement for women’s equal rights. Prior to sophomore year I’d never had a conversation about feminism, and it wasn’t as big a topic in the media and among celebrities as it is now. I was on Twitter one day and everyone was buzzing about Emma Watson being this big feminist who advocated for women’s rights and education for young girls in Africa.

I Googled feminism and once I had a solid definition, I typed the word into my Tumblr search box. Scrolling through the #Feminism tag I read posts about misogyny, unequal pay, discrimination in the workplace, dress codes, and men silencing women’s opinions. It was a huge shock to me that I hadn’t known about this movement. Why was no one in my life talking about equality for women, how most images cater to the male gaze, or internalized misogyny amongst women? Was I living in some sort of dazed and confused world? I wanted to scream, “Hello!?!?! Get with the program, people!” at everyone I knew.

I started following blogs on Tumblr that posted regularly about feminism, like thefeministme, thecatsmeow90, and curvellas. In the early stages of finding my feminism I thought of Emma Watson as the epitome of a feminist. Not only was she was an ambassador for the UN’s HeForShe campaign, which aims to achieve gender equality by involving men in feminist movements, but everyone seemed to love her. I came across an interview published in the Daily Mail where Watson said, “I find the whole concept of being ‘sexy’ embarrassing and confusing […] What’s sexy about saying, I’m here with my boobs out and a short skirt, have a look at everything I’ve got?’ My idea of sexy is that less is more. The less you reveal the more people can wonder.” This shocked me! I felt that feminism should empower girls, not put them down or tell them to cover up. Still, I really believed that if I thought differently than Watson did, my ideas must be a sham.

I was still questioning whether I was a “true” feminist when Patricia Arquette gave her Oscar acceptance speech. It was a basic, bite-sized speech on feminism which included the words: “To every woman who gave birth, to every taxpayer and citizen of this nation, we have fought for everybody else’s equal rights. It’s our time to have wage equality once and for all and equal rights for women in the United States of America.” In an interview after the Awards ceremony, Arquette added, “It’s time for all the gay people and all the people of color to fight for us now.” This enraged me! Her words implied that the only women worth advocating for are those who can give birth, which erases childless and childfree cis and trans women. She basically said OK people of color, queer people, and trans people, your fight is over, now pay attention to us white women! Instead of acknowledging the privileges white women have over other women, she glossed over our struggles to make her point.

On Twitter, I saw people commending Arquette’s speech as if there was nothing wrong with what she had said. But as I browsed my Tumblr dashboard I came across a popular post explaining intersectionality. The author of the post outlined how often mainstream feminists excluded anyone who isn’t a white, cisgendered, straight, able-bodied woman from their advocacy. It helped me see that mainstream feminism was a bit watered down, and left out black, POC, LGBTQI, and disabled people. More and more I noticed that, like in Patricia Arquette’s speech, trans women were often excluded from feminist discussions due to a close-minded idea that if you weren’t born with a vajayjay, you could not know what it’s like to be a “real woman.”

It occurred to me that I was part of the many groups excluded by mainstream feminism, which almost never addressed my struggles as a black girl. While white girls like Kylie Jenner were considered beautiful and exotic for having big lips and wearing dreads, black girls like Ciara and Zendaya, were bashed for wearing dreads and having the same attributes. I also noticed that the discrimination that black women face in the workplace was a major struggle that rarely gets the same level of coverage in the mainstream as the wage gap between white men and white women. I started to question the inclusiveness of every feminist-identified celebrity I had looked up to. Maybe it was wrong to put Emma Watson and Patricia Arquette on a pedestal, especially if the feminism they were promoting was so one-sided?

I could still see the value of their contributions—they were bringing widespread awareness to the movement which could lead to girls supporting and identifying as feminist, and digging deeper. Increasingly, I understood that I did not have to agree with all of their views, and that feminist role models don’t necessarily have to be celebrities. My mom works her hardest to support me on her own. She has never depended on a man for the happiness and success she’s attained. She taught me that I can achieve anything I want—no matter how hard it is, dress however I want, and not to take shit from anyone (if I’m in the right, which I am 99 percent of the time). She’s one of my biggest feminist role models.

On Twitter, I found other black girls and girls of color struggling with feeling like outsiders in the world of feminism. I began to align myself with feminists who valued intersectionality and not just feminism for and about white women. Unlike the conversations going on in the mainstream, my conversations with these women focused on issues important to us—women of color, trans women, and gay and queer women. These women have made me feel comfortable, liberated, and less alone: I can speak about topics from firsthand experience without wondering whether or not I’ll fit a perfect feminist mold. We support each other by giving each other compliments, encouraging each other when we feel down, and encouraging each other to speak up.

The women in my online community have helped me develop and grow as a person and as a feminist. Gabby’s tweets are funny in their own right but also point out social inequality in a way that helped shape my feminism. Simone influences me to speak my mind, and to stand up for what I believe in. Dyandra was one of the first people to make me realize that I could center my struggles as a black woman in my feminism, and speak about other people of color, too. Feminists like Beth, who continually uplifts all women, have encouraged me to do the same for other women. And Syena has taught me to always be aware of what is going on in the world, and that just because something may not affect me directly, it is still important to talk about and support issues other people face. I am more outspoken and bold about my beliefs since finding my community of feminists, one of those beliefs being that feminism isn’t just a struggle for white women; the struggles of all women deserve to be discussed and taken seriously. I no longer question whether or not I am a “true feminist” because I have finally found my sense of place. My feminism is valid. ♦