“We don’t have any goals as a band except to be a band and write music.”

Why Can't I Be You: Genevieve Liu 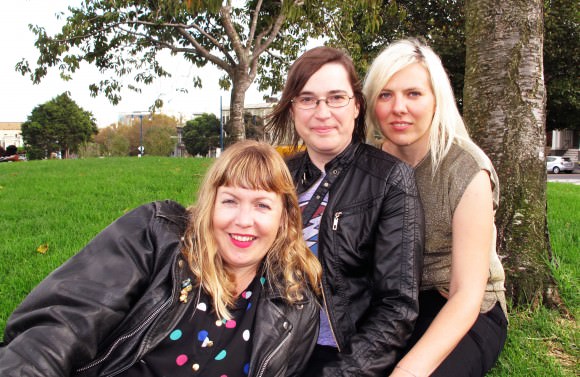 Erase Errata started playing shows in San Francisco in the late ’90s. The band spent the better part of the early aughts perfecting their jumpy, jagged post-punk and touring with the likes of Le Tigre and Sonic Youth. After an extended hiatus that began in 2009, three of Erase Errata’s four original members—singer/guitarist Jenny Hoyston, drummer Bianca Sparta, and bassist Ellie Erickson—rejoined this January to self-release Lost Weekend, their first full-length record in nine years.

A lot has changed for the longtime friends, who are now spread between the Bay Area and Texas, but Jenny, Bianca, and Ellie have kept the band going through emailed demos, studio time when they can swing it, and shows (they’ll play a string of dates along the West Coast this fall).

Earlier this month, I hopped on the phone with Bianca to find out more about how to keep a band alive, why she’s looking forward to shredding well into old age, and Erase Errata’s new video for “Don’t Sit/Lie,” (conceived and directed by their friend Hannah Lew of Grass Widow and Cold Beat):

MAURA LYNCH: Hi! What are you up to today?

BIANCA SPARTA: We’re just getting going. I have a little baby, so we spent the morning reading books and eating breakfast.

Your new video is for the song “Don’t Sit/Lie,” but the song has a different title on the album, right?

The title that is on the record, [“Another Reason to Arrest & Imprison the ‘Free’”,] is different than what we actually call it. [The song] is about San Francisco’s Sit/Lie ordinance—basically, you can’t sit or lie down on the sidewalk [between 7 AM and 12 PM], otherwise you get a ticket. Police use it to harass homeless people, to get them to move, so that the “eyesore” is not on the street anymore. People voted that into law here, and we were totally offended by that.

The video stars [performance artist/musician/comedian] Dynasty Handbag. I’d never seen her before, so I started watching all of her videos on YouTube and now I’m obsessed. How did she get involved?

Dynasty Handbag, aka Jibz Cameron, used to live in San Francisco and we would perform with her project at the time—she used to have a band called Dynasty, which was more of a band-band with songs, which sort of morphed into Dynasty Handbag, a performance art thing. I hope more people are introduced to her because she’s a genius. We introduced her to [the video’s director] Hannah Lew—I guess everyone’s just connected through music.

After you watched the video, how did you feel it fit with the song?

Oh my god, I loved it. It’s like the perfect video in my mind, and I’m completely happy with it. I like that it’s one woman’s trip through insanity and back. I think it’s really funny, too.

Lost Weekend is the first LP Erase Errata has put out since 2006. What have you all been up to since?

Ellie started business school, a masters program in Berkeley. Jenny moved back to Texas where she’s from. And I have a baby.

Did you ever feel like you were going to break up as a band or was it a decision to chill out for a little bit?

It was always a decision that we wanted to play music in whatever capacity. We all still really enjoy each other’s company and playing music. We’re not doing this as a career; we don’t have any goals as a band except to be a band and write music.

I love that. How is it different from when the band first started?

We were touring six months out of the year. We would write a record then immediately start writing the next record. That’s exhausting, and not how any of us wanted to live. We just do it as a hobby [now], and I think that’s what makes us all happy. We don’t get that burnout.

How different was it to put out an album now, as opposed to the last one? All the press and social media stuff seems way more intense these days.

You can play that game, but you can also not play that game, and it’s fine. We put this record out ourselves, whereas with past records we’ve had labels put it out who have expectations of breaking even or promoting their bands and their label. This time around, we did it ourselves with little or no expectations. We set the bar super low. [Laughs] We have an Instagram and a Facebook and all that stuff—I don’t know why because we really don’t update it. There is that peer pressure to have a little bit of band existence on the internet, but we choose to not really participate in that way. I don’t like spending all my time on social media.

I was reading an interview with Jenny and she said that when you bandmates found each other, it was “rare and beautiful.” What was that time like for you?

It was totally rare. It was special that we just got together and had the same musical taste and the chemistry worked and we were able to write songs really fast. I’ve definitely tried to play music with people who I’ve liked their style and it just doesn’t work. When it works it really works, and when it doesn’t it’s pretty obvious.

It seems like that’s something people run into a lot when they’re first starting to play music. Like, I want to start a band but I don’t know how to find my people. What’s your advice for someone in that position?

I would say go to shows and play, don’t think about it too much. Go and play drums with your friend who plays bass and then try to put together a band. Things don’t have to be perfect. Even if it’s not good, it’s fun. It’s literally the funnest thing ever.

How did you meet Jenny and Ellie?

Me and Jenny actually met through a music personal ad! It was in the ’90s. It was in the Guardian weekly, [a newspaper] here that doesn’t exist anymore. I placed an ad like, Drummer looking for blah-blah-blah, I’m into Huggy Bear. Jenny loves Huggy Bear, so she answered my personal ad.

That is so cool! What was it like meeting that first time?

I’m sure it was awkward and weird. I remember Jenny had all of this stuff recorded, and she gave me a tape, and then we went to my practice space and hung out for a while. We ended up really liking each other and it just worked.

And what’s the energy like now? What does it feel like to get together and play after being a band for so long?

We click into that special energy during our first song onstage. I’m excited that all of us can do all of the other aspects in our lives and come back to this one thing that’s been so constant year after year. I’m totally jazzed that we can still write songs that all of us like and that we’re not compromising or doing some watered-down version, that we’re all still friends and playing music and that it still feels fun. We’ve all known each other for a long time now. It’s like we’re all sisters; it’s family at this point.

So will you guys still be putting out records in your seventies?

I hope so! Do you know the band Flamin’ Groovies? They’re all like old men now. I went to their show a couple weeks ago, and I was so inspired. They were playing these old songs that totally still held up, and they were having so much fun. I was like, You know what? I can’t wait to be old and still be playing music. It was rad! They were shredding. ♦

Maura M. Lynch is a Brooklyn-based writer, editor, and musician. When she’s not playing in the bands Darlings and Blush, she co-runs STET, a site dedicated to emerging writers and new books. Find her on Tumblr.