Because You Can: Wild Out

All animal print everything.

Animal-print clothing can be associated with all sorts of qualities, depending on your point of view: An attention-getting leopard-print dress might be considered tacky or garish to some people, while to others, it could evoke a sense of luxurious elegance. Other people might just find it sexy, seductive and a bit thrilling. Whichever way you interpret the pattern for yourself, one thing is certain: Wear this shit loud and proud.

Animal print is the nemesis of normcore, the archenemy of athleisure, and the bête noir of the basic. It has been embraced by starlets, punks, goths, pin-ups and anyone else who tends to favor dressing up on the more adventurous side of life. Though wearing animal prints is a timeless trend that has been popular for decades, not everyone feels like they’re able to pull it off. I’m here to tell you that you totally can! If you’ve been curious, yet a teeny bit scared about adding some leopard print into your life, the time to hesitate is through. 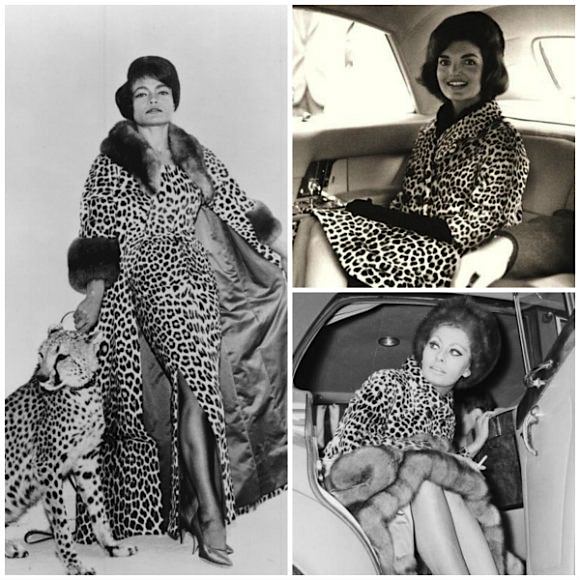 In the ’60s and ’70s, actresses, singers, and other glamorous ladies had very stylish approaches to wearing primal prints. Eartha Kitt, left, wore a long, leopard-print dress with a slit and a matching coat and accessorized with an actual leopard. VERY FITTING, since she played Catwoman in the Batman television series. Both the First Lady of Fashion, Jackie Kennedy, top right, and the actress Sophia Loren, bottom right, were seen riding around in cars, wearing coats that would make any leopard print–lover jealous. 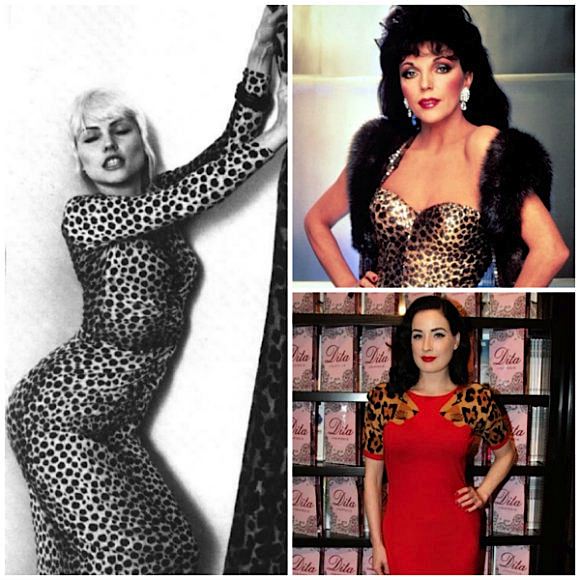 Blondie’s Debbie Harry, left, traded in her punk T-shirts to strike a coquettish pose in a leopard-print jumpsuit during a photoshoot in 1979. Dynasty’s Joan Collins, top right, embodied ’80s excess by wearing diamonds, fur sleeves, and a leopard bustier. And in 2009, the vintage goddess and burlesque artist Dita Von Teese, bottom right, modeled a red Jean-Charles de Castelbajac number that featured two leopard heads facing each other on the shoulders. 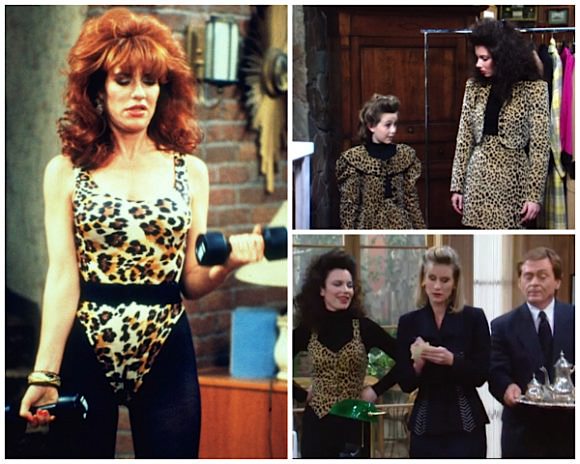 There are certain sitcom characters who constantly don leopard print onscreen, particularly Peg Bundy (Katey Sagal, left) in Married With Children and Fran Fine (Fran Drescher, right) in The Nanny. While these characters live very different lives, they have a pivotal thing in common: Both women are unforgettable, opinionated scene-stealers. It made sense for the shows’ stylists to highlight an element as vivacious as leopard print as recurring parts of their respective costumes. 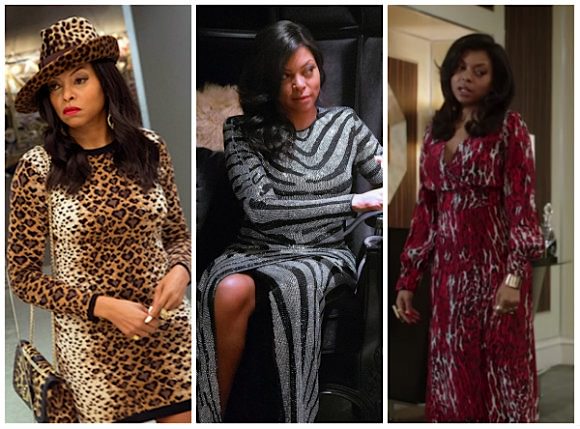 Recently, a brand new animal-print fan was introduced to the small screen. Every single episode of Empire featured the character Cookie Lyons (Taraji P. Henson) in a parade of fierce outfits, including a collection of leopard print in a rainbow of colors, sparkly, sequined tiger stripes, and even a snakeskin blazer. THANK GAWD FOR COOKIE. We’ve been needing someone like her to come along. She’s a badass matriarch and a businesswoman who gets things done and doesn’t take crap from nobody—the perfect arbiter of leopard print. She even looked impeccable coming out of jail in a white fur coat, spotted bodycon dress and a high ponytail. Dreamy. 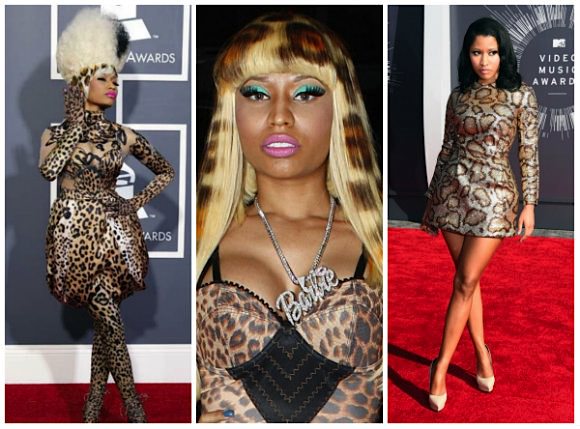 Nicki Minaj has been seen strutting her stuff in a full leopard suit, a spotted bustier with matching hair, and a cute snakeskin mini. All three looks incorporated animalistic elements in their own ways. 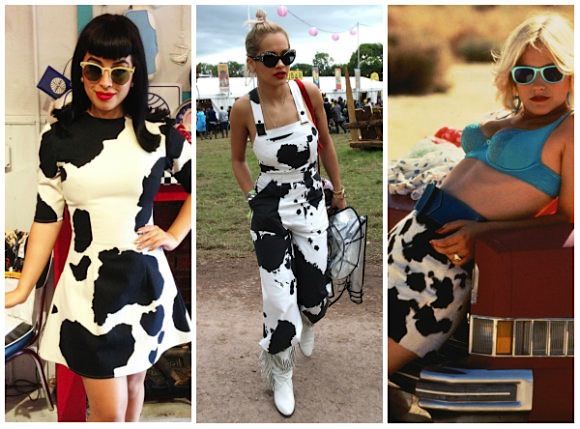 Just because leopard reigns over the animal-print kingdom, amazing cow patterns shouldn’t be ignored. The blogger Jasmin Rodriguez of Vintage Vandalizm , left, wore this adorable skater style cow-print dress by Kenley Collins, while Rita Ora, center, rocked a cowgirl look in a cow-print jumpsuit and fringe boots. One of the other dream items for my closet is the perfect cow-print miniskirt, entirely inspired by the character Alabama Worley (played by Patricia Arquette, right) in True Romance.

Now that you’ve got a little bit of animal inspiration in ya, let’s figure out what to wear! 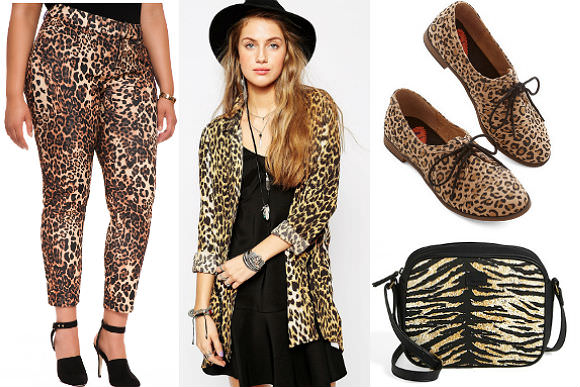 If you’re not ready to take a cue from the advanced moves of Eartha Kitt and dress in head-to-toe matching leopard print, I won’t blame you. Instead, try a single animal-print item, like leopard pants or a spotted button-down. Or wear all black, and let your sartorial wild side shine through accessorizes like leopard flats or a tiger-striped purse. 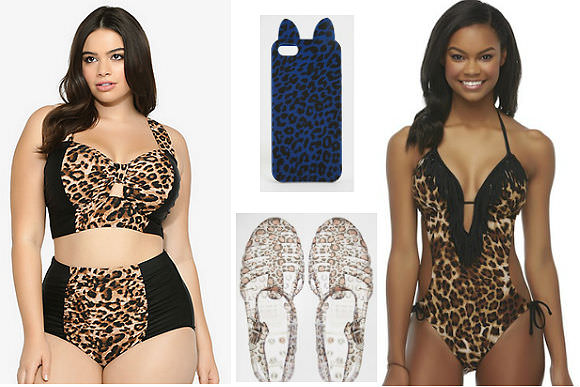 Poolside leopard looks are a good way to try it out your animal instincts, especially if you usually play it safe with a black swimsuit. If you’d rather subtly accessorize the suit you’ve already got with wild spots, leopard up a phone case or simple jellies! 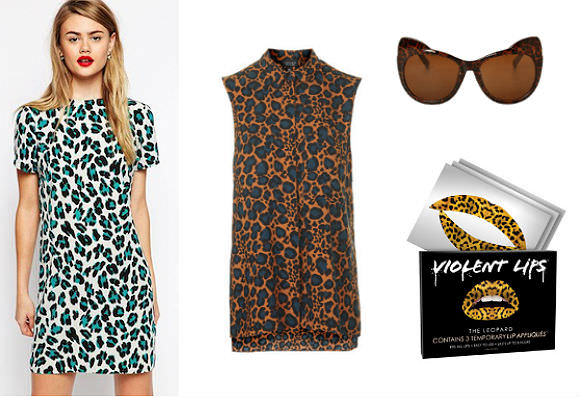 For those of you who have no fear: Here are three looks you should definitely try! First, get loud in a brightly colored leopard-print shift dress or top, like the ones above. Second, double up on your print by wearing an animal-print shirt with matching sunglasses. Bonus points if you get some with cat ears! Finally, make your lips leopard print! You’ll do both me and Nicki Minaj proud, pussycat. ♦