Because You Can: All Natural

Looks inspired by the mystical wonders of the great outdoors.

Let’s Do This for Real: An Interview With Alessia Cara

Musically, I am alive for the howling banshees, the witches, the smoky-voiced crooners whose songs help me feel less alone. Grouper, FKA twigs, and Kate Bush all interpret the natural world differently, but they each look to Earth’s bounty as the commonality that brings us all together. I am inspired by the way these artists position themselves in the world writ large, in both fantastical and practical ways; they use their visionary imaginations to craft worlds, but also reference that world so concretely in order to bring it to life. I love the idea of taking these themes and expressing them through clothing—externalizing your inspirations is hugely grounding!

Grouper, aka Liz Harris, is an ambient musician. Her music recalls the feeling of wandering through a haunted forest. Her atmospheric songs are places just as much as they are music. Listening to her album “Dragging A Dead Deer Up a Hill”, you can close your eyes and feel enveloped in the skeletal branches of haunted trees and the scent of moss hanging in the twilight air. 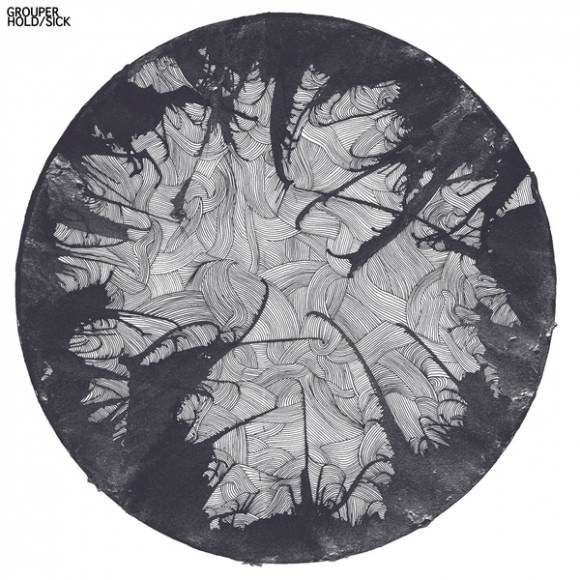 Liz Harris is also an accomplished visual artist. She created most of the artwork for her albums, which are typically hand-drawn black-and-white patterns. Many have a very earthy quality to them, like the shapes found in flora. Her motifs feature leaves, branches, and marble slating, along with ethereal photographs that capture Liz Harris’ monochromatic interpretation of the natural world. 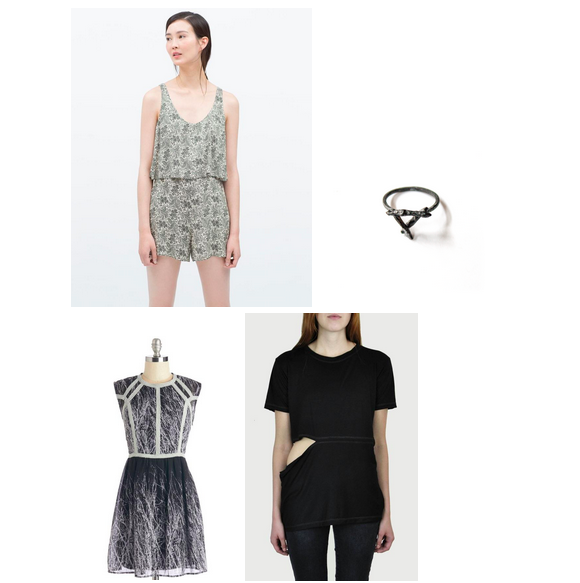 I love putting together outfits based on the way the music sounds. The idea is to create a world based on the music’s mood, and translate that through clothing in order to feel more deeply connected with it. Grouper is perfect for this idea because her atmospheric music has such a strong imaginative component—you can project your own visions onto her otherworldly tunes. Channel Grouper’s ambient style with a simple, colorless palette and botanical-looking prints that appear to build upon themselves. 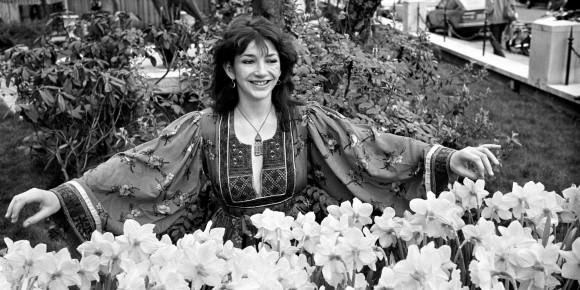 Kate Bush utilizes nature as a living character in her stories. Her songs are not autobiographical—she is a storyteller who weaves complex narratives that could fill tomes, though she manages to fit them into songs just a few minutes long. Her later albums, like Hounds of Love and Aerial, are Kate’s homages to the grandness of the world around her. The natural word is just as much a breathing entity as her fictional heroines, with moods just as complex. And there are so many moods to choose from! “The Sensual World,” the title track from the album of the same name, imagines nature with its own blossoming . The latter half of Hounds of Love is a small collection of loosely related songs called the Ninth Wave Symphony. It tells the story of being lost at sea, but the water as an element tells its own story, too: In “Under Ice,” it is a frozen, oppressive thing; in “Waking the Witch,” her trembling voice climbs laboriously out of the ocean.

Stylistically, imagining nature as a character means you get to be fun and inspired with the way you dress. Kate Bush took the natural world and used it to tell a story, and you can do this, too. Themes that call upon the four elements—earth, air, fire, and water—work well for these purposes, as do references to Kate’s fantastic ’70s/’80s look. She loved to dress as opulent as the characters in her stories, with long gowns, bell sleeves, and sparkling embellishments. You can find lots of vintage ’70s dresses with wide sleeves on Etsy. Don’t forget the poppy-red lipstick! 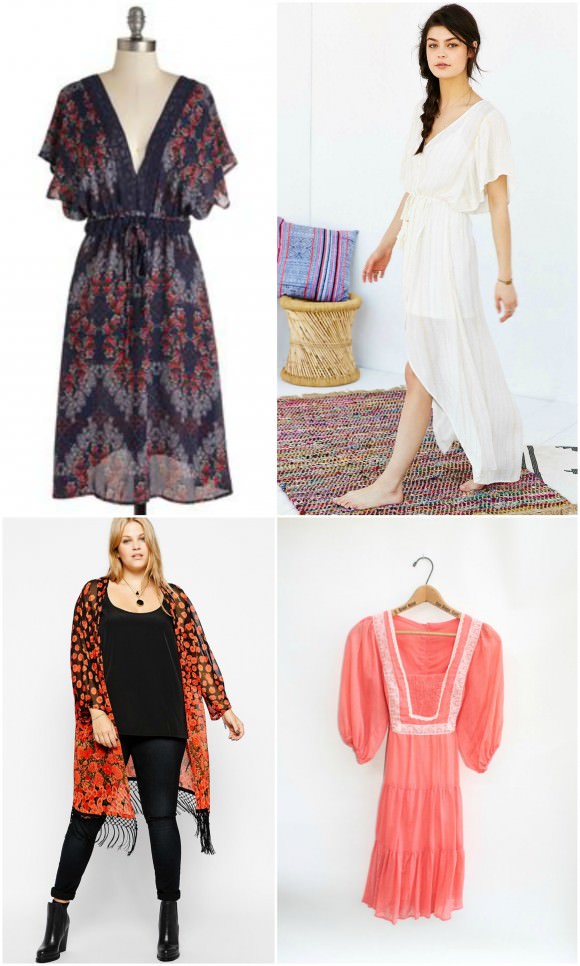 We often think of nature in terms of plant and trees and forests, but there’s an entire other ecosystem that often goes forgotten: the desert! I picture endless sand dunes, brilliant sunlight, and glittering gold tones against a bright blue sky. The desert has a stunning duality: the sweltering heat during the day is balanced by cool, breezy nights. No one captures this better than FKA twigs. 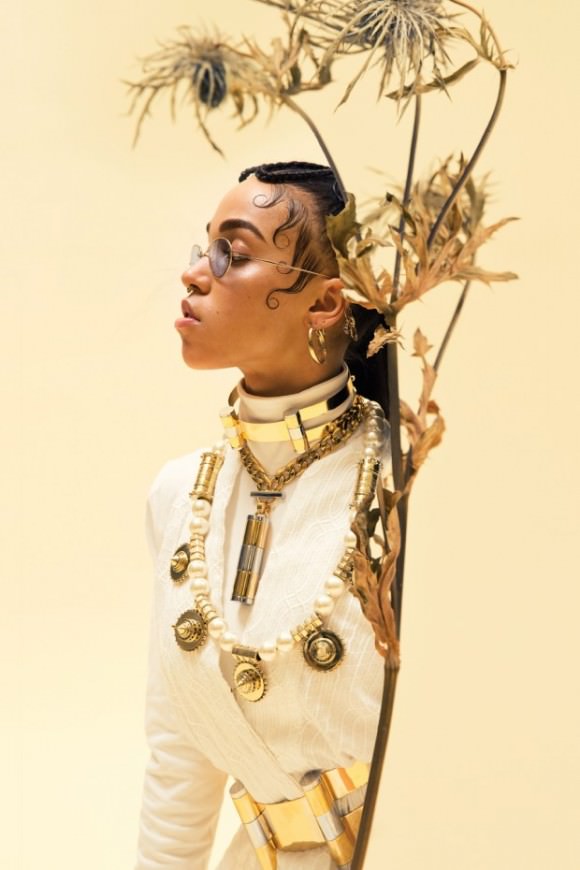 FKA twigs photographed for The FADER by Charlie Engman.

Her music has such a dry quality—her smoky, barren voice is enhanced by stripped-down crackling beats. Sartorially, she calls to mind the extreme fires of the desert, wearing sandy earth tones and flowing garments that seem to catch the arid wind. Of course, twigs grounds it all with giant jewelry and a sizzling little black crop top! 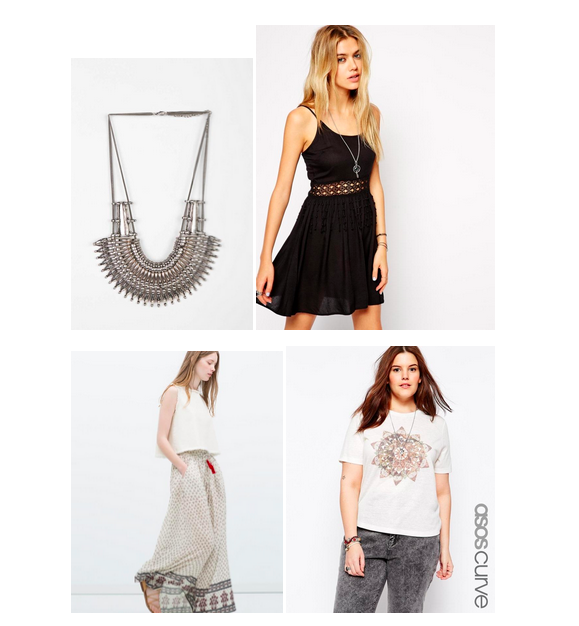 Transport yourself to the desert plains by wearing dusty colors and pairing them with clothes that resemble prickly plants like cactus and aloe. Rich metallics offer a nice contrast that mimics the intensity of the sun. If you want to go full-on twigs, take a solid foundation of black dresses or cropped pants, then pile on the desert vibes. Stick to clothes that are simple and freeing, and you’ll be the magical desert sprite of your dreams! ♦

because you can fka twigs grouper kate bush nature