Let’s Do This for Real: An Interview With Alessia Cara

“Young people are really standing up, and I hope I can be one of them.” 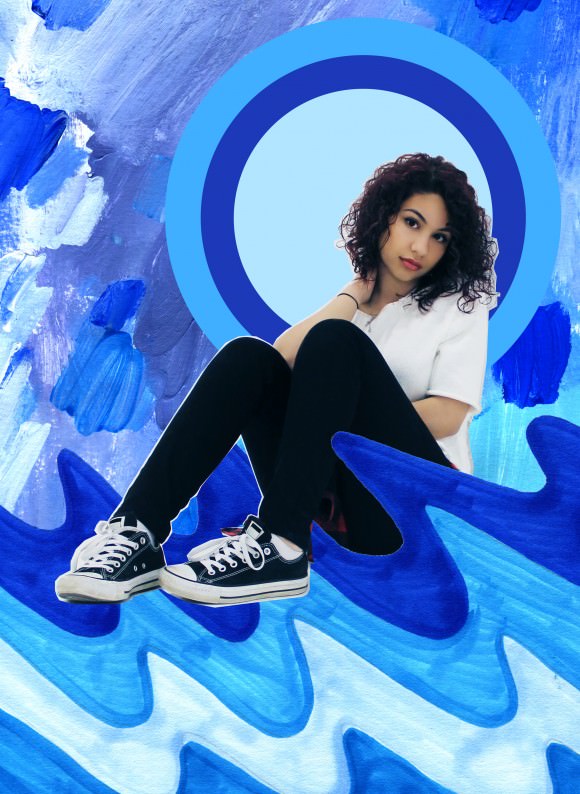 Alessia Cara’s first single, “Here,” is about something almost everyone can relate to: being the shy person at a party where you don’t feel comfortable. “Truly, I ain’t got no business here,” she sings. “But since my friends are here, I just came to kick it, but really I would rather be at home all by myself.” It’s kind of a miracle, in that it’s a pop song about being a total loner in a landscape of pop songs that all seem to have the aggressive goal of getting you to participate in the soiree. Listening to it feels like a kind of permission: Hey girl, if you think this place sucks, then go ahead, skedaddle on home. Being alone is sometimes the best thing for you.

The 18-year-old singer/songwriter is gearing up to be everywhere, but only recently built up her own confidence, having once felt as shy about performing as she did being at parties. She bolstered her self-assurance by posting YouTube videos and taking drama classes at her Brampton, Ontario, high school, where she graduated last year. After choosing to take a gap year before college to work on her music, Cara found herself in the middle of a whirlwind: She was discovered on YouTube and soon swept up by Tab Nkhereanye, the music exec who signed her to Def Jam, which will drop her album this year.

I spoke with Cara over the phone about being on the cusp of stardom, overcoming shyness, and supporting other young women.

JULIANNE: You posted on Instagram that you can say “we” now about being on Def Jam. How does it feel to have a record deal?

ALESSIA CARA: It’s obviously amazing, but in my situation, it feels like a dream, like I don’t feel like I’m actually doing this, you know? Everything is happening so quickly.

Did you just graduate high school?

Last year—I would have just finished my first year of university by now.

Did you choose not to go so you could work on your music?

The thing is, in my school, you have to apply to colleges—that’s part of the graduation process. I applied to programs I thought I would like, because at the time my family was encouraging me to have a Plan B. Doing music professionally was not a thing they thought I could do full time. I ended up getting scholarships and was about to [go to university], but something told me not to do it. I don’t know, I felt like it wasn’t right for me, and I had to explore that side of my music and my passion. So I said, “Let me take a year off so I can see.” And in that year, I got signed! So it worked out!

That’s such a hard thing, to trust yourself and know that you should follow your dream. How did you listen to yourself?

It’s something that I always knew I would be 100 percent happy doing, and I knew that if I were to do anything else, I’d be settling. I thought, It can’t hurt; people take a year off all the time. I took a chance. School will always be there, you know?

True. So when was the first time you knew music was what you wanted to do?

I don’t remember a specific time. I remember singing all the time—it was something I’ve done since I was two or three years old. Some of my cousins and aunts and uncles sing or dance, but my parents don’t really sing. I did choir one year in elementary school, but I didn’t take any music courses in high school. I took a lot of drama, so I did a lot of performance in that way, but I didn’t take any music classes, which is weird. It was something I always used to do as a hobby, but I was really shy to do it in front of people at first. I used to think it was so scary, so I would do it on my own. As I took drama, I really started loving the performance side, so I thought, OK, let’s do this for real.

You were shy before? How did you break out of it?

It was being pushed by my teacher, and by my friends who knew I could do it. They played a huge part in it; the reaction I was getting from people [made me feel] like, OK, I can do this. I guess they like me! I guess I’m good at it!

How do you write your songs—in a journal?

Sometimes, yeah! When I did this album, I did most of it in a studio. We go in, and I let everything out at the studio. But I’ll write things in a journal, and then go back and remember how I was feeling and write things out on my guitar. For my first album, I wanted not only to talk about my own experiences, but to really make an album for everyone. I want at least one song to resonate with every person. I have a lot of talk about body image for women, self-acceptance for everyone, accepting that you might be weird or you might be a little uncool but you could still be cool if you find your own space. There’s a lot of empowering stuff, some vulnerable stuff.

That’s awesome about the empowerment stuff. It always seems like there’s someone or something out there that wants to bring us down.

With me, it wasn’t even other people. A lot of the stuff growing up, it was internal. I always thought that I wasn’t good enough, even if other people may not have felt that way. Getting confidence from the people around you that love you and care for you—that kind of reminds you, you know, You’re not an idiot! You’re not stupid! You’re not uncool!

It’s one of those fundamental things about growing up that’s so hard, finding your confidence. Did music help you get there?

It really did! Before, I always felt like I was average at everything, and I wasn’t good at anything—that I faded into the background, I wasn’t popular, I was a regular kid. I felt like I didn’t have anything that made me me, or separated me from anyone else. When I started singing in front of people and seeing the reaction I was getting, it really made me confident, like, OK, this is something that I’m really good at. This is my thing.

How has your family reacted to you being signed, and was there more pressure because you knew they were watching you?

My mom and my dad’s reactions were very different. When I first sang for my mom, she started to cry and was like, “This is what you’re meant to do!” She was so into the whole idea. Of course, the mom side of her wanted me to be safe with a backup plan, but she also wanted me to do this. I knew I had her support. My dad was like, “No, this is not a career for you!” He was very strict, you know, it’s like a strict Italian family. But then he started traveling with me. He’s still been traveling with me everywhere, pretty much, and I think he’s beginning to see how real this is. He opened up to the idea, and he’s supporting me more and more. It’s really cool to see that he gets it now. I felt the pressure, and it kind of sucked at first to have my family telling me, “It’s not a job,” but in the back of my mind, I knew I would get it.

Just listening to your voice, I’m like, yeah, you should be doing this. It makes sense! Good job! What about your friends? You’re probably traveling a lot.

It’s good to have those friends where, you maybe don’t see them for months but then you see them again and it’s like nothing ever changed.

Totally. Who is your best friend?

I have two best friends. One is like my other half. We’ve known each other since we were 10, and we’re like, the same person. And then my other friend I’ve known since ninth grade. She was my first friend that I made in high school. They’re the two people I go to for everything.

What do they think about all this, getting signed and everything?

They were telling me that I was gonna do this before I even knew, and not just them. My other friends, people from school, acquaintances, would come up to me and say it. They supported me way more than I ever did in my head. It’s such a confidence boost, to have your peers tell you that you’re good at something. It’s cool!

Besides putting out my album, becoming better at performing and singing. I wanna be really, really good at everything, including writing—everything. [I want to] make great albums in the future, and I want people to look forward to my albums as bodies of work, as [being] whole, instead of just a number-one single. I would love to do all those fancy awards shows, typical artist stuff, and to help people out, meet new people, and learn as much as I can. With my album, I wanted to represent youth, and to represent me.

Do you think we’re in a time when smart young people are being heard more?

Especially in the music industry, there is a big shift where young people have a voice now. You see people like Lorde or Raury—anyone young and doing it right now—and we’re really starting to show our faces and prove that young people have a voice, and we actually make sense, and we have important things to say, too. I love the shift that’s happening in entertainment, and in life in general. Young people are really standing up, and I hope I can be one of them. Not only in this industry, but in life it’s so hard to be a girl, and to feel like you might not have a say or the rights that other people have. The only thing we can do is support other girls and be happy for them. Don’t be mean to girls who really like what they’re doing and who like themselves, because it’s so hard to like yourself. Be happy for them! ♦