The Other Side of the Wall

When I got there, I let myself grieve for the love I lost. 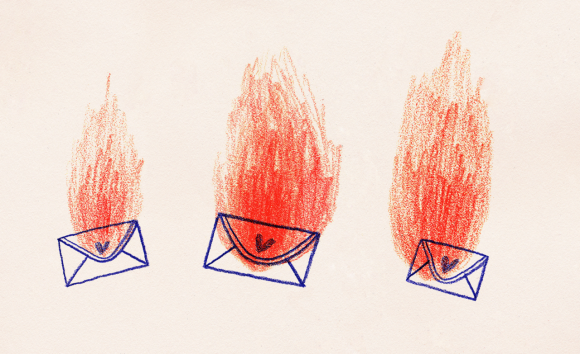 I’m writing a memoir that will be published some time next year. When I was putting together the book proposal a year ago, I knew that because I was writing about high school, I would have to write about Greg, who was my first love, my first real boyfriend, the first person I slept with—all of it. I didn’t want to. I was afraid that the story of him would take over the story of me, even though we were only together for five months. We’re talking about one-eighth of my high school career, but Greg was emotionally and sexually abusive. Deep down, I knew it while we were dating, but it wasn’t until four months after we broke up that I saw it in black and white, when I was training to become a volunteer for a domestic violence agency. In the binder of training materials, a page described characteristics of abuse, most of which mirrored the way Greg had treated me. But guess what? Even then, I still loved him.

I’ve never actually admitted that before.

I wasn’t afraid of writing about the abuse. I’ve done it, a lot—so much so that I’ve written about writing it. My relationship with Greg shaped my friendships (solidifying some, poisoning others), the way I viewed sex and love for years to come (unhealthily), and the things I threw myself into both positive (writing, feminism) and negative (substance abuse and self-injury). Our relationship defined my teenage life. I couldn’t tell the story of the person I became in the aftermath of him without talking about him.

I won’t go so far as to say that writing about the abuse has been easy, but I’ve found ways to handle it, to protect myself. I blocked vulnerable parts of my heart—the parts that loved and trusted Greg—using anger, as well as disassociation, which also helped me survive the abuse while it was happening. When someone is emotionally abusing you, hardening yourself can be necessary, and yesterday Jenny brilliantly explained why.

While I was working on the section of the memoir about my relationship with Greg and sending pieces of it to a trusted writer friend, I realized that to help readers understand why I stayed, or was with him in the first place, I was going to have to break down a thick wall—the one I put up about nine months after Greg and I broke up, when I decided that the only way to recover from the relationship was to seal off the love, which had survived his abuse, our breakup, and even my acknowledgement of the abuse.

For me, as an abuse survivor, it’s a foregone conclusion when I listen to other survivors talk about their abusers: I know they loved the person who hurt them. He or she “took care” of them even while they were making life hell. Their abuser understood things in a way no one else did, and were there when no one else was. Maybe they were hilarious. Probably they were wounded and needed care-taking. Almost certainly they were charming as fuck. Greg was all of these things. He was all of these things before he was abusive, and he was all of these things while he was abusive. Being abused by the boy who had been so charming, sensitive, funny, and sweet was what hurt the worst, more than the abuse itself.

Hold on. I feel like I’m going to cry, and I’m still not used to that. There was a wall. For 18 years, there was a wall, and I only knocked it down a year ago.

My journals from the months after the breakup are confusing. I hadn’t looked at them for years, but when I started working on the memoir, I knew I needed to. I’d forgotten what I’d find there. I’d forgotten about the schism that tore through my psyche when I started to see that some of what happened with Greg was Not Right. It’s there in my notebook of poetry. On one page is a poem called “P.R.D.C.T,” which stands for “Punk Rock Dream Come True” (I ripped it off a Bratmobile song) and is all about the lunch periods Greg and I spent sitting on the windowsill of a church near school, wrapped in each other’s arms, daydreaming about our future and purple-mohawked babies. On another is a poem called “The Shower,” which is about scalding my own skin, trying to feel clean after we had sex in his basement without a condom—something I didn’t want to do, but that Greg had forced me into before by saying that my refusing to would be the equivalent of saying I wanted to break up. There’s a ton of unsent letters to Greg, too. About how much I loved him. About how he was my best friend, and I missed that friendship and I wanted it back. When I reread those in my home office, I had to get up and run to the bathroom, because I was certain I was going to puke. I sat on the floor next to the toilet, fuming at the girl who wrote them, feeling like she was desperate and weak, feeling like she had betrayed me.