Tears of a Clown

Making myself into a cartoon is how I learned to deal with the world. 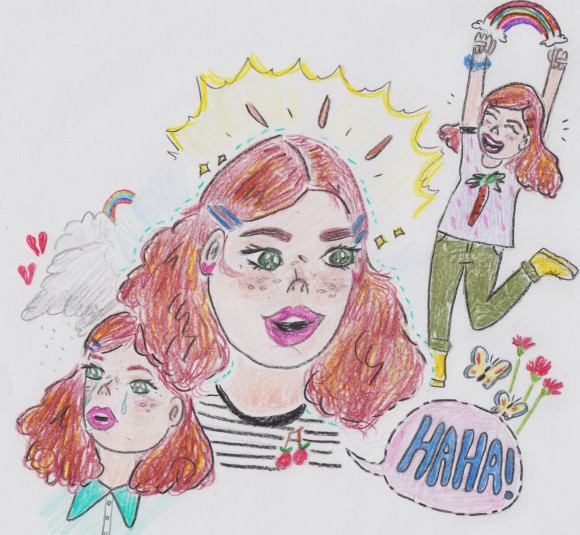 I’m basically a cartoon. I’m slightly under five feet tall, my hair is enormous, my clothes are ridiculous, and I’m almost always laughing and dancing around. When I’m feeling cartoonish, which is most of the time, I am lighter than air, smaller than an atom, happier than a clam. Have you ever heard of anyone being HAPPIER than a clam? Cartoons can get sad—they have their hearts broken and lose family members and have to put their dogs down—but they bounce back on their feet with one of those impossible ninja moves and keep smiling.

I’ve been a cartoon most of my life, and I wouldn’t want it any other way. It’s how I learned to deal with the world. Trying to pinpoint when is tough. I was a very tiny person in elementary school—almost a foot smaller than the other kids my age. People constantly made the joke, “I didn’t see you down there!” and I took that VERY seriously. They were literally overlooking me! To make my voice heard, I cracked jokes, played characters, and I dressed oddly, often wearing a shoe from one pair on my left foot and a shoe from another pair on my right, which in hindsight couldn’t have been good for my feet. I was a gymnast and loved to perform my paltry handstand skills to prove my height was an asset. I imagined people saying, “What a useful person she is!” What they said was closer to, “She’s good at gymnastics because she’s small!” (In gymnastics, shorter girls are considered to perform better because they have less “body” to throw around.) But as long as I was recognized for my height, the observation was OK with me. Any time someone described me as “the small girl,” I thought, Hey, at least they know who I am!

But I also became some people’s wind-up toy: They just sat back and expected me to entertain. I remember being at a party as a freshman in high school and kids from school wanted me to tell stories about my family, because I was related to a few eccentrics and could do impressions of them all. They laughed and seemed to love it, but there was a disconnect between the person they watched and the real person inside. We barely knew each other. They didn’t ask me questions, or seem to care to ask questions. I’d wanted to stand out, and now I did. But I was no less alone because of it. My classmates were drawn to me in school because my antics added silliness and unpredictability to otherwise monotonous days. But when it was time to go home, those people chose to hang out with their real, close friends. As a solitary kid and preteen, my antics were a way to get people talk to me, even if what they were saying was just droning white noise. In high school, I wanted the noise to stop.

When I got to college, I met a girl named Claire who grew up in a similar way: People liked to watch her dress up in costumes and play characters; she was lonely but not alone. She made a short video called “Glow Man’s Thoughts,” which made me cry the first time I saw it, and still makes me cry, because it’s the perfect summation of everything I’ve ever felt in my life: that people like to look at me, and I like when they look at me, but I don’t always like to talk to them. Glow Man likes to be alone. And that’s true about me, too:

Being alone means I don’t have to be “on.” I can be cranky and tired, and I can be sad. A guy I worked with once asked me to “turn it off for a second” when I was doing a bunch of silly characters and voices. He claimed that I wasn’t being the real “me.” I lowered my voice and forced tears (a beautiful performance, I might add), then whispered, “Real like this?” He freaked out and insisted I return to my “happy” character. A good cartoon doesn’t get sad unless it’s to cry hilariously large tears into an overflowing bucket. But alone, I can cry normal-sized tears into a normal-sized bucket. I love to cry—it feels cleansing—and occasionally when I have nothing to do I revel in sadness for a day. I have certain rituals that I do to keep myself sane, when no one is watching. Sometimes it’s reading, sometimes it’s drawing. Lately, I’ve been opening my window and staring outside for a long time, for up to hours on end. I process all the feelings I don’t have the time or energy to otherwise think about, and turn off my phone and computer and all interactions with other people. I think about things I saw and heard on the street, friends who are getting on my nerves, about heartbreak and how I feel about being a recent college graduate with uncertain life plans. I keep track of time by watching the elevated train go by.

Recently my cartoon persona has been helping me pursue something I’ve always wanted to do, which is comedy. I can use the same techniques that saved my ass in school from utter and complete loneliness to draw in an audience through storytelling, characters, or full reenactments of Fiddler on the Roof in which I play the Roof. I know how to keep people entertained, and I’ve also figured out the other half of the equation—how to keep myself content and balanced. Tune in next week when I get an anvil dropped on my head but get back up and keep laughing. ♦