Stuck in the Middle

I was caught between two people who couldn’t stand each other. 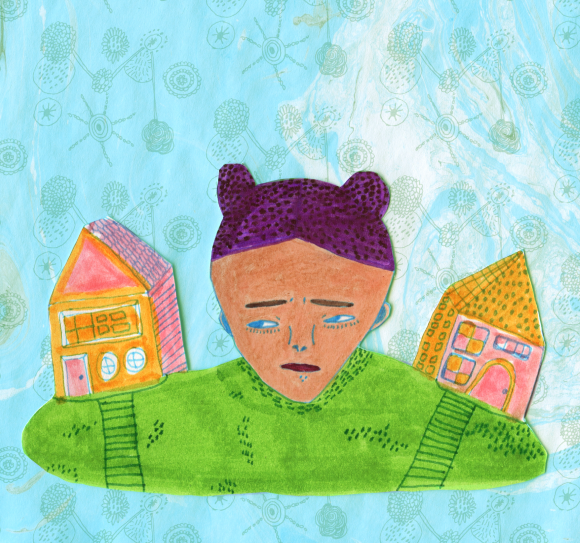 After my parents’ messy divorce when I was eight years old, my family situation was mad stressful. My mom, brother, and I stayed in our family home, and my father moved to a house on the opposite end of town. My mother got custody of us, but the arrangement was more like a joint custody situation: We were allowed see our dad whenever we wanted to. With both parents in the picture, I assumed that meant there would be a continuation of my somewhat normal life, with each of them playing their roles when it came to practical stuff like making arrangements for school field trips, giving me pocket money, and driving me around. I was wrong.

I never doubted my mom or dad’s love for my little brother or me, but because my parents refused to talk, we often became collateral in their cold war. When I mentioned one parent to the other, that parent scowled and said something bad about the ex-spouse in question. It was one thing to have to grudgingly accept the reality that my parents split up. It was something else entirely to feel doomed to being forever caught between the two people I loved most when they couldn’t stand each other anymore.

My father is the laid back, permissive, hands off parent. He likes to have his children out of his way so that he can carry on about his business. Anything you want? You can have it, as long as it requires minimal intervention from him—a “don’t even bother with the details, just be back at a decent hour” kind of vibe. My mother, on the other hand, is strict. She needs to know every single detail about an outing with friends, an assurance that I will return before it gets dark, and everyone’s parents’ phone numbers for good measure. The one thing they have in common is the inability to communicate without it dissolving into an argument.

Being the responsibility of two people who lived in two different parts of town with two different ways of doing things sucked on most days. Instead of speaking to each other, my parents often opted to relay messages like “Tell your father that…” and “Well, actually, tell your mom I said…” through me. The details are a little fuzzy about what I asked for, but I can easily recall the feeling of abandonment that sunk in the first time my mother’s answer to a request of mine was, “Ask your father, Lebohang. I just won’t be able to.” The thought of my mother, whom I had gotten used to as my main parent, saying no, and of me having to get on the phone to beg my dad, whom I was rarely seeing at that point, really made me feel alone.

If I was invited to a party, I would wait for days on end for an answer about whether I could go and who could take me there while the back and forth happened. It usually ended on the day of the event with me urgently pleading with both of them, “______’s party is today, and I still don’t know who’s gonna pick me up!” Sometimes each concluded that they couldn’t fetch me, and that was that. In those situations, tasked with the responsibility of making sure my life actually carried on while my folks were being stubborn, I would ask my friends’ parents for rides. It sometimes felt like no one had to be present enough to take my needs seriously, except me.

Back then, getting advice to “talk” to my parents about how their stalemate made me feel was incredibly frustrating. My mom and dad were able to acknowledge my pain (when I was 12, in a rare moment of agreement, they decided I should start going to counseling), and they occasionally apologized. But there were times I’d get off the phone with my dad, who had the habit of raising his voice when he spoke about my mom, and run to my mom’s room crying because of how heavy it was that he loathed the woman who was the light of my whole world. Their relationship was so damaged that absolutely nothing could make it better, not even my obvious sadness and discomfort.

For high school, I went away to boarding school in another city, where I became less emotionally reliant on my mom as my primary caretaker. I didn’t see her or my dad for weeks at a time. There were amazing shows, exhibitions, and parties happening, none of which my parents even needed to know I was going to in the first place, so I didn’t have to ask them for permission or rides. I got a fixed allowance, and started doing poetry performances and some freelance writing, which meant I was making some of my own money, too. Little by little, I was shrugging off the need to get my mom or my dad involved in making decisions about my life. Many of my friends were getting their driver’s licenses, and when the time came for me, the push/pull between my parents—like usual—stalled and delayed every step of the process. This time, though, I chose to ignore them, save up the money to go to a driving school, and get my permit on my own.

I have now lived most of my life with my parents’ refusal to communicate with each other being the normal state of affairs. My parents are stuck in their ways, but they’re only human—they’re dealing with their own issues. I try my best to keep in mind that if I want to be a priority, I have to be my own priority. This approach beats waiting on them, especially now that I’m old enough to put my desires and feelings first. When I want something, I try to do what’s required of me to get it. It would be a lot harder to change them than it is to make earnest attempts to take care of myself. I figure that I have to be the one to take the initiative, and if I ever get stuck or need help, I’ll call them (separately). ♦