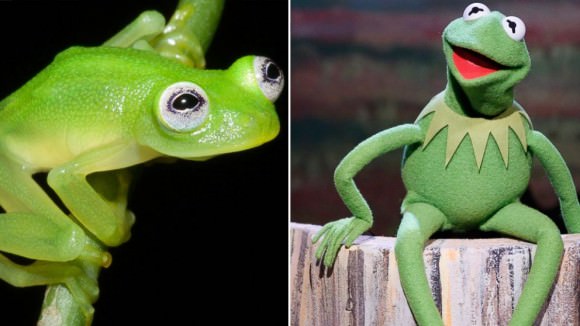 Left, photo of Hyalinobatrachium dianae by Brian Kubicki. Right, photo of Kermit the Frog by Lloyd Bishop, via ABC News.

A new frog has been discovered by researchers in Costa Rica, and it looks a little bit familiar. The Hyalinobatrachium dianae species is a glass frog with nuclear skin and big ol’ googly eyes, making this discovery one small step for biology, ONE LARGE STEP FOR KERMIT THE FROG FANS. As someone who self-identifies as a Muppet in human form, I feel vindicated! Muppets are real! They liiiiiive! 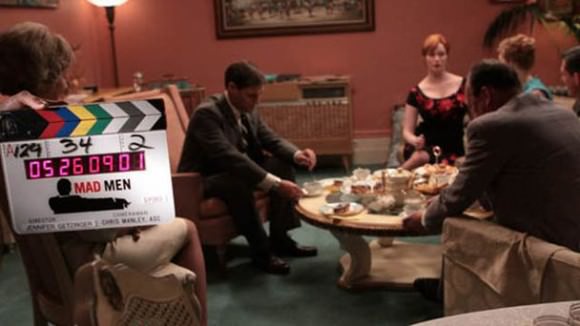 If you’re a fan of Mad Men, perhaps you’ve been interested in reading all of the oral histories and behind-the-scenes reports from the making of the show. This “oral history” of Mad Men parodies the reverence with which the show is discussed, and it is a goddamned spit-take factory. DO NOT READ with a beverage in your mouth. DO READ for sure.

In an Instagram post, Carrie Brownstein’s wrote about meeting ​one of her heroes, ​Cindy Wilson from the B-52s​​. In ​the post, Carrie ​writes: “This is what it is to be a fan: curious, open, desiring for connection, to feel like art has chosen you, claimed you as its witness. To this day I still am a fan, of many, many things. Fandom keeps me hopeful and engaged, a participant.”​ ​Reading this, I felt part of the whole ecosystem of fandom and stardom; it reaffirmed the importance of creative influence and exposure. It was kumbaya A.F. Circle of life. Fandom is life. ​Thanks, Carrie.​
Derica

I’m awed by this video from i-D magazine‘s “Obsessed” series. The video features Liz West whose deep and true love for the Spice Girls has made her a Guinness World Record holder—she has the largest collection of Spice Girls memorabilia in the known universe. The video includes some pretty dope overhead shots of her surrounded by platform shoes, Mel B cutouts, a Victoria Beckham mask (NEED), and other miscellaneous items. She explains her fandom, “When you fall in love with something so passionately, it’s hard to fall out. They’ve taught me a lot.” 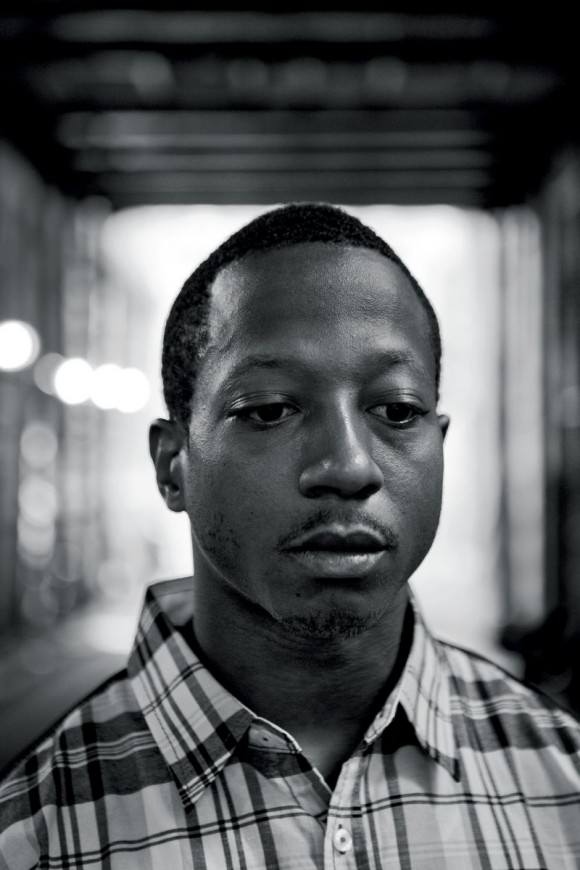 Photo of Kalief Browder who spent more than a thousand days confined on Rikers Island as a teenager. By Zach Gross.

A video released in the New Yorker gives a glimpse of the extreme violence faced by teenagers in prison. The video, taken from surveillance camera footage, shows the formerly imprisoned teenager, Kalief Browder, being slammed to the ground and beaten by a prison guard, while he’s wearing handcuffs and therefore unable to defend himself. It’s so rare that footage documenting the abuse people face in prison surfaces—even though these kinds of abuses are widely reported by incarcerated people. Just in case you’re don’t subscribe to the New Yorker, Democracy Now also has the video footage, plus an interview with Jennifer Gonnerman, the writer who broke Kalief’s story. 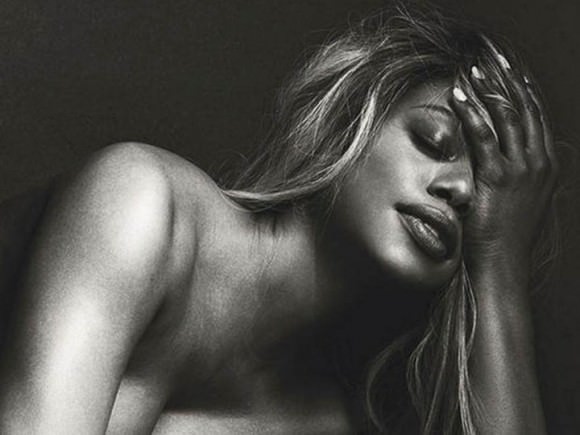 The actress Laverne Cox posed for a beautiful nude portrait for Allure magazine, which met with some super ugly backlash from the writer Meghan Murphy. In response to Murphy’s cruel piece, Playboy magazine published an article titled “Laverne Cox Gets Naked, Exposes Radical Feminist Exclusionism.” In the piece, the writer Noah Berlatsky quotes Shaadi Devereaux and Zoe Samudzi to analyze why black trans women are so often subject to abuse and vilification by a certain strand of feminism. 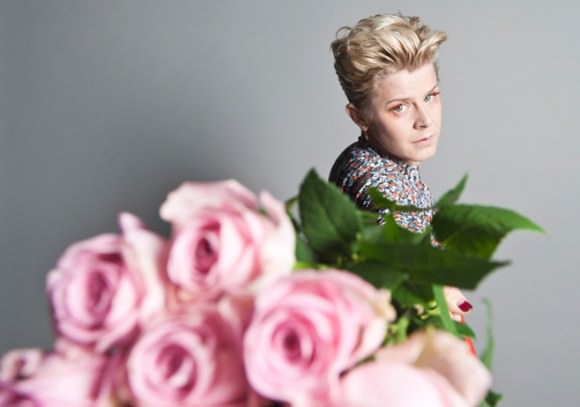 Photo by Tom Spray, via Pitchfork.

Last week, the writer Laura Snapes attended Tekla, a tech conference for girls in Stockholm, Sweden. As if a girls-only tech gathering weren’t cool enough, the singer Robyn—who helped organize the festival—was also there, participating in icebreaker activities. Her motivation for making Tekla a girls-only event was to see “what happens when there are no boys in the room,” giving girls the opportunity to be creative and productive in a supportive environment. I love Robyn, and I loved reading this report, which features lots of great quotes from attendees! 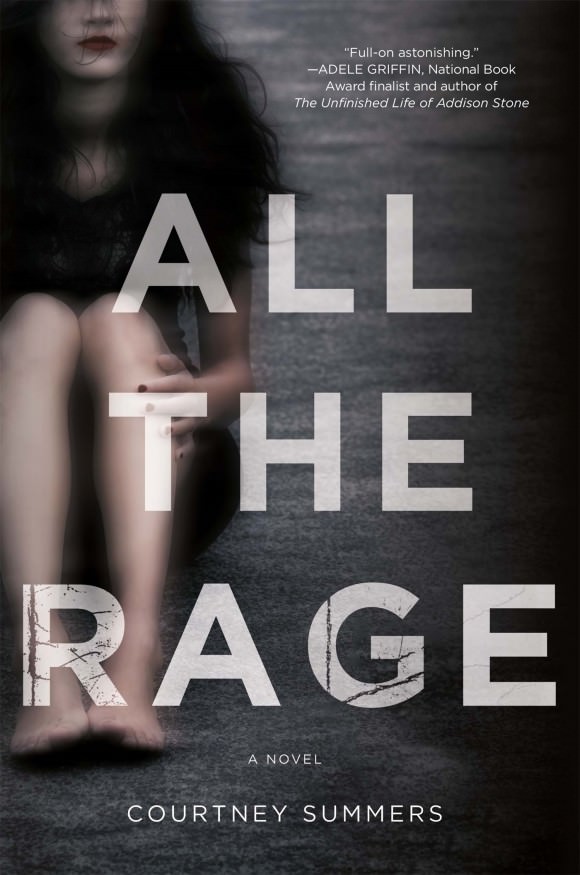 April is Sexual Assault Awareness Month in the U.S., and Book Riot brought together the YA authors Laurie Halse Anderson and Courtney Summers to discuss their respective novels, Speak and All the Rage, which both deal with sexual violence. The two writers talk about the challenges they’ve faced in writing about this difficult but important topic, including having their books labelled “rape books” and comments that there are already enough books featuring sexual assault survivors. Sexual violence is a traumatic fact of life for too many, and I’m grateful that these women are writing stories about these real struggles. As Courtney says, “Girls’ stories matter because girls matter.” 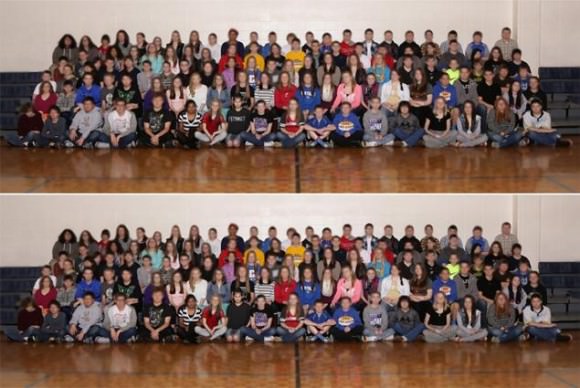 In “What the Heck????” news, I was bummed to hear that Ohio middle-schooler Sophie Thomas’s t-shirt was censored in her class photo. Why? Because it had the word “feminist” printed across it. The principal of Sophie’s school, Clermont Northeastern Middle School, decided that the word was “offensive,” and blacked it out in the class shot—even though it didn’t violate any school policies or dress codes. Sophie posted messages of protest on her social media accounts using the hashtags #IDeserveFreedomOfExpression and #KeepFeminismInSchools. Her school has since promised to hold “larger discussions with students” about feminism. Go, Sophie! 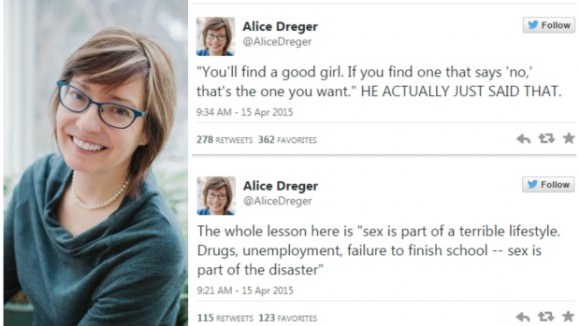 Photo of Alice Dreger and screengrab of her tweets, via CBC Radio.

Usually I wouldn’t be thrilled by the idea of my mother attending sex-ed class with me (HOW EMBARRASSING), but in the case of mom and author Alice Dreger, I think I can handle it. Alice Dreger sat in on her son’s sex-ed class and live-tweeted it, sharing the messages that the educators—from a Christian pro-life group called SMART—conveyed to the students. Alice was horrified at the educators’ use of disputed research, slyly illogical examples, and scare tactics (one example: “Safe sex is kind of a misnomer.”) I think Alice did a great job of drawing attention to the biased sex education some students receive.

In this SUPER heartwarming video, 102-year-old Alice Barker watches footage of herself performing in dance clubs in the 1930s. Alice had never seen the footage before—possibly because it had been filed under the wrong name in a film archive. It is so sweet to watch Alice revisit memories of her incredible youth!
Meagan 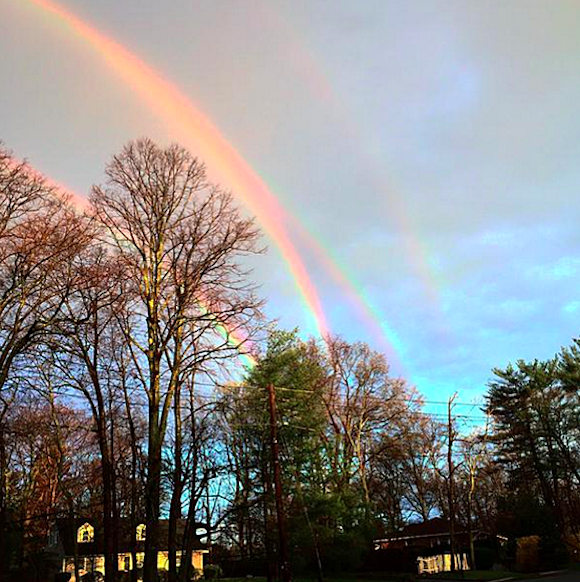 Photo by Amanda Curtis, via Accuweather.

This week, we were treated to the most delightful of memes—not a rainbow, or a double rainbow, but a quadruple rainbow, which painted the sky after a quiet storm. Stare at this picture for a while and feel all of your worries dissolve. This super-rare natural phenomenon is—according to an Accuweather meteorologist—technically impossible. But because nature is wild and untamed, a double rainbow was projected off a body of water to create two more beautiful rainbow arcs. Ahhh, I love Gaia so much.​ ♦