“Zits are beauty marks,” and other cosmetic advice.

I’m absolutely desperate to try out a wicked-bright eye liner for summer! Any ideas on how to wear color subtly? —Emma, 16, England

There are so many ways, Emulux! One of my favorites: Electric blue is the simultaneous most eye-catching/trashiest departure from Big Black, although you can also substitute a shimmering emerald or eggplant-y shade if you’re so inclineé. Also? It’s going to sound v. unlikely, but gold is a neutral, no matter where you’re wearing it on your physiognomy, and this CERTAINLY extends to the thread-thick delta of eye skin directly about your lash line.

Whatever you pick: Shimmy a liquid formulation (like this one ($3, Jordana), which comes in all the aforementioned colors, plus more) as close as you can get it to your lashes—applying it in tiny Morse-code dots or dashes, which you then connect with the thinnest line you can muster, can be a really helpful technique. (Ages ago, on a different web’s site, I detailed how to do this—plus tons of other liner tricks—by compiling tutorials from a variety of makeup masters.) Going super-tight against your actual eye makes this feel less dramatic or offbeat than a full D. Bowie impersonation, or even a cat-eye—although I encourage you toward both, if/when you feel you’re ready!

Really, though: Anything can be subtle/normal/unremarkable-looking as long as you treat it as such. The main thing here: If you leave your homestead all worrisome about if what you’re wearing is WEIRD!!?!??!!!, people read that. If, instead, you leave it thinking, Man, I look like the Oxford English Dictionary definition of the phrase “tight as fuck,” and the O.E.D. actually started defining phrases in addition to words exactly for this purpose, well, then, prepare to improve your audience’s vocabulary in a wholly different (and rad) way. TECHNICOLOR FOREVER! —Amy Rose

I have SUCH thick, long hair, which I find so difficult to cope with. Most of the time, I end up wearing it up. Any tips? —Tess

I have had a similar problem for the last 10 years, which is roughly how much time has elapsed since I’ve been to a hair salon. Last time I went, at age 14, I asked for “Ashlee Simpson–style wavy layers” and instead received a scraggly mullet. My natural reaction to this was to grow my hair as long and thick as it could possibly get! Luckily, my fear of the beauty shop doesn’t affect me too much, because I dig my long-ass waves, but living every day with a teeming mass of dead protein filament heaped atop your head can sometimes be a drag, as you say—so here are some ideas to make your beautiful bird’s nest a little more manageable.

The first thing that bugs me about my long hair is that it gets EVERYWHERE. I leave footlong strands of what looks like golden-brown yarn on every pillow, couch, bus seat, and bathtub I come across. I don’t really know squat about the proper way to care for your hair, but my first suggestion would be to get regular trims. You don’t need to change the style at all. Just snip off an inch or two: I’ve found that getting my mom to trim my hair over the kitchen sink every six months keeps it healthy, gets rid of my plethora of split ends, and really stops my hair from falling out (in fact, it’s always when I notice more hair clogging the drain after a shower that I commission a haircut from my mom. I’m pretty sure it’s normal for as hair long and thick as ours to shed like you’re some kind of wooly mammoth, but semi-regular snips seem to lessen the amount of and frequency with which you leave ribbons of hair all over the place).

I also feel you on the wearing-it-up thing. For years, the only two hairstyles I bothered to fux with were the Cousin It (down) and the Topknot (up,in a…topknot). Lately, I’ve started experimenting more with braids. I wrestle my hair into a Lara Croft-style French braid almost as often as I wear it down or in a bun. The appeal of the braid was initially that it’s a very comfortable way to style heavy, thick hair. Ponytails can feel like they’re dragging your head down, but a French braid twists your hair in a way that subdues and tidies it while still showing off that length ‘n’ luster. This kind of braid gathers the majority of your hair into a neat little spine that sticks close to your head, therefore eliminating much of the weight and mess that you’d be dealing with when it’s flowing free and reducing the hanging-down part to a single, sleek braid applicable to many “looks” (’90s Catholic-school mean girl! Scorpion Lady! The blond girl from Frozen?!) There was a time when I wouldn’t be caught dead with it outside of my bedroom, but on days when I just CBA to undo it, I swear the compliments FLOW. Despite my once-fervent hatred of any kind of hairstyle aside from the two here aforementioned, I’ve come to think that a slightly-dishevelled braid casually snaking over my left shoulder looks really cute.

More than this, I’ve also found braids to be technically very effective in a behind-the-scenes way: I started using braids to try and make my hair wavier, but soon realized that they can also have a SLEEKING effect on tresses. If I sleep with my hair in two braids on either side of my head à la Wednesday Addams, oftentimes when I unravel it in the morning, it’s wavy but kind of compressed, like sleeping with it tied up like that has made it go kind of…limp? After being held in a couple of skinny braids like that overnight, my hair is really soft and manageable, and flat in a way that basically makes my hair look tidy and NORMAL, which is sometimes the look I’m going for. One thick Lara Croft braid gives me waves like a lion’s mane when I undo it, while two tight little plaits worn for an extended period of time make it look neatly deflated, but still with a cute little braid-wave, and make it feel much lighter and smoother (for instance, if I know I want to wear my hair in a ponytail somewhere, I’ll often try and put it in these double braids for a while beforehand, so that it’s flippier and sleeker and less WEIGHTY than it would be otherwise when I tie it up in a pony). 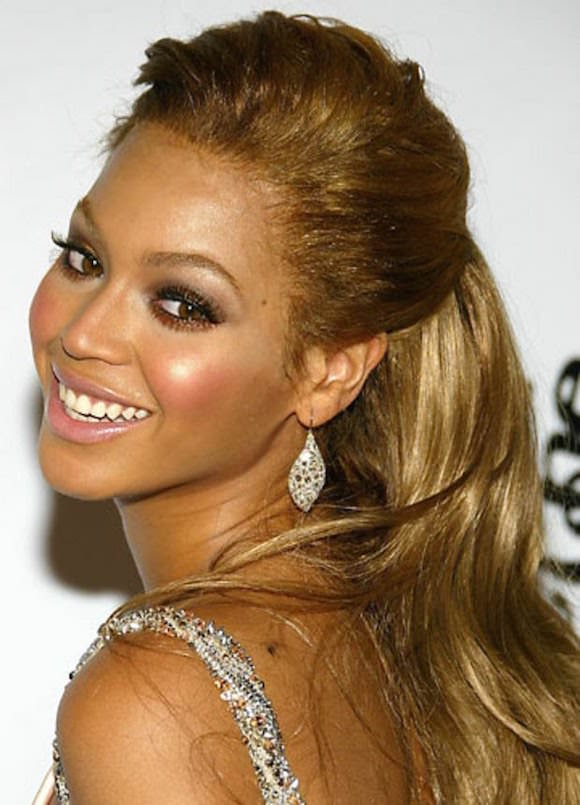 Tying up part of my hair reduces the weight, and is another way to neaten and small-ify long hair while still showing off to everyone that you have little to interest in personal grooming and are proud to have hair almost long enough to sit on. It’s cool!

As a final note, though, I gotta say that, here at Rookie, we are very much in favor of You Doing You. If you want to twist your mane up into a discreet chignon, that’s cool, but also don’t be afraid to let your wild waves flow! I loved experimenting with the hairstyles I’ve talked about here (and Lord knows, when it’s warm, wearing your long, sweaty curtain of hair in any style that gets it off the back of your neck is almost a necessity), but ultimately, I also try to own my sheets of pain-in-the-butt-length hair. My favorite look is one I like to call Rapunzel Cavewoman. Even though it’s not exactly NEAT enough to wear to, like, a job at the bank or something, I LIKE my difficult, tangly, scraggly mane! As my fellow waist-length-wigged Rookie Mads puts it, “I think the best way to deal with long, luscious locks is to not deal with them at all. *Paris Hilton voice* Wild/tangled manes are hot!” —Esme

I really, really love my freckles, but really, really hate my acne scars. As someone with next to no knowledge of the foundation/concealer/BB cream world, and who hates wearing heavy makeup, what would you suggest to make me look like a freckle-faced goddess? —Kate

Though I passively enjoy both of their bands and work, I’m not particularly attached to Kurt Cobain or Courtney Love as figures/people. (DO NOT CAST ME OUT OF YOUR HEART FOR THIS—de gustibus et coloribus, etc.) Still, something that has always knocked around in my brain is when, during their interview for Sassy, a teenmag of yore, this happens as they talk about their recent engagement:

“Sorry about the zit,” [Courtney] says, pointing to her cheek. “Zits are beauty marks,” says Kurt.

Like Kurt, I think skin with its own specific topography is gorgeous and worth showing off. If zits are beauty marks, than acne scars are downright supermodelesque. But it’s also OK if you want to see what having a placid facial zone is like! Since you want your freckles to shine on—more beauty marks—I recommend picking out a concealer, which you typically apply to a localized part of your mug, rather than all over. The best ones feel gluey, but not overwhelmingly weighty. I’m all about this one from Amazing Cosmetics, which is TRULY $$$—42 OF THEM, WHAT THE HELL?—but lasts FOR-EV-AIRE, and of which you only need the pinprick-iest amount to completely obscure whatever divots and blemishes you’re looking to eradicate. If that’s way out of your price range—which, dude, I get it—I have long gone to bat for CoverGirl concealers, which are uniformly great at giving you uniform-looking skin. Instead of going for a liquid formulation, which will just change the color of your skin but not so much the texture, try out their clay-textured, crayon-shaped one, which is called TruBlend Fixstick ($8, Ulta). It’s great for filling in little spots—here’s how. Then leave the rest of yourself alone! Or don’t—goddesses come in many different permutations and/or layers of paint, ya beauty mark! —Amy Rose ♦

WHAT TO DO WITH YOUR FACE AND BODY??? Anything you want, but if you have more specific questions that need answering, write Amy Rose and her beauty henchpeople at [email protected]. Please include your name/nickname/initials, age, and city.