No Joy: Moon in My Mouth

A song premiere and interview about hard work that pays off in super-dreamy ways. 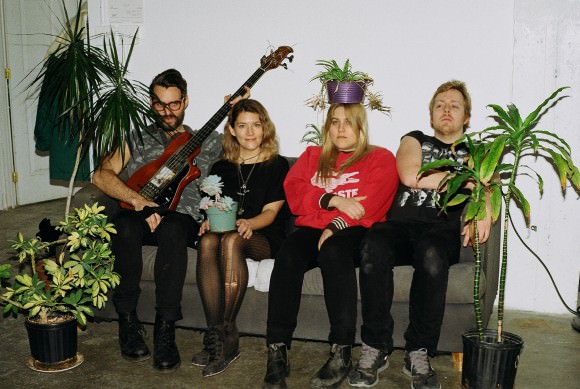 No Joy’s third album, More Faithful, is many things: dense and sprawling, loud and restrained, explosive and contemplative. When I got the chance to talk to Jasamine White-Gluz, the band’s singer and guitarist, about the record, she let on that there was a lot of real-life push-pull that contributed into the seesawing sounds on their upcoming release. Check out our premiere of “Moon in My Mouth,” a new track from More Faithful, which comes out June 9 on Mexican Summer, if you want to hear what I mean:

I asked White-Gluz about being happy and sad at the same time, subverting pop music, and that unsettling feeling that everything in your life is moving on without you. Read on for more (faithful)!

DYLAN: On More Faithful, there’s a contrast of heavy and soft songs. The track we’re premiering, “Moon in My Mouth,” is one of the softer ones. Was that contrast intentional? How does this song play into it?

JASAMINE WHITE-GLUZ: It was totally intentional. I’m glad you picked up on it. When we started recording the album, the goal was to make something that was kind of pop, but subverted. If we wrote a song that was really poppy, we subverted the arrangement so that it was really hard to play, or had weird time signatures.

“Moon in My Mouth” is in 11/4 time, which is quite math-y for us, but the vocal line we came up with was kind of basic. It’s not a time signature that you usually hear in pop music. We did try to create something that, when you first listen to it, you think it’s a pop-rock song, but when you get closer, there are a lot of sneaky tricks in there.

How’s the songwriting handled in No Joy?

It’s collaborative, but somebody will bring in an idea and everyone else will expand on it. With “Moon in My Mouth,” it was Michael (our bass player) and I making something that was hard to listen to and play, but we wanted to anyway…something that sort of made us feel uncomfortable for some reason but we couldn’t really say why.

You have the quality of being hard to listen to [on purpose]; that was something I picked up while hearing the album. And then I was like, How do I mention that without sounding like a biottttch?

Haha! As a band, we kind of put ourselves first. The intention was, I’m sick of playing songs that are easy to play. We want to challenge ourselves. On a few songs, I had to belt some notes, and we didn’t put the reverb on some stuff. I felt like I was on Broadway or something. Writing this record, we wanted to think, I don’t know how to do that, or, That is uncomfortable to do, and then hopefully our discomfort would translate in our songs to the listener as well.

What’s interesting about challenging music is not that it’s hard in the sense of Ugh, I really have to sit through this, but that it demands your attention, and it’s rewarding for the attention you give it. A lot of shoegaze or dreampop-type music is about getting lost, drifting off in the music. More Faithful has its own atmospheric qualities, but what it doesn’t let you do is space out. There were moments when I was shocked back into reality by one of the heavier songs. I felt challenged in a good way.

I can see that. A lot of shoegaze is really referential—you kind of have to play the right guitar and have the right effect on your voice, and as a result, you fall into a little box and come out sounding like Cocteau Twins. We grew up on and love that music, but I don’t know why someone would try to sound like a band that already exists. People will just try to listen to the first band.

That contrast between the hard and the soft—that consistency of challenge—through the lens of www-dot-thisteengirlwebsite-dot-com and our readership of growing-up human beings, it’s almost a metaphor: big, sweeping, dramatic parts, then these lulls, but never being let off the hook. It’s never quite easy.

Somebody mentioned that to me today: “Whoa, the record’s really like, one song that is really frantic, and the next is really moody.” Astrologically, I’m a Cancer, so…

Oh, I have a lot of Cancer in my chart, too! On that more personal tip, do you feel like there’s a process of maturation in the record?

For sure. On a personal level, it was a record that came to be written in a time of transition. We would be on tour for quite a while, come back, and realize that quite a few people moved away or people got jobs at different places. I also ended a relationship at that time, so it ended up being a turning point record I think, so in a way it was a maturing process.

At the same time!

I definitely wouldn’t call your music light or fluffy, but your internet presence makes it seem like you guys don’t take anything too seriously, which I find to rule.

It’s like this: We never like taking press photos, or being in videos, et cetera. We’re not really showy people. But, we’re definitely really stupid! We like really stupid things and find them very funny, and at a certain point we were like, “Let’s just let anyone know we’re actually kids.” Some people would think we’re like scary goths and sad all the time, but were really a bunch of funny idiots. Now it’s begun to show, for better or for worse. For example, I don’t think some people are happy to know that we love the show Empire. [The band posts about Empire on their Facebook sometimes.] We probably turn some people off, but whatever!

Oh my god. That’s Laura; she talked about wanting to do it for a long time, and she legitimately set it up and went for it! She wants to make it a regular thing, so people can keep sending their questions in. Some of them are very sad, though, like, We’re not qualified to give you answers on this, but maybe find someone that is?

I find it more interesting when a band has a personality! Even it’s one that’s so annoying that you don’t like the band anymore. But we were sick of being gloomy, or interpreted as gloomy.

You can make gloomy things and still be a funny person! And vice versa, I suppose. You talk about your home seeming different after coming back to Montreal from tour. It’s a different reality to be on the road as a musician, then to return home to notice everything is changing. That involves a lot of personal adjustment, but how does that affect you creatively and in the songwriting process?

Writing was the only thing I could do to deal with it! It was the only familiar thing that was still here. When you’re on tour, you’re working on your band 24 hours a day. You don’t get to go home after the show; you’re in the middle of nowhere sometimes. To come back from tour, it was realizing that whatever social sphere I did have was sort of crumbling, so I just kept up the same level of intensity as I did on tour, but focused the intensity on writing.

Michael (our bass player) and I really connected about the feeling of upheaval, so we spent a lot of time on the recording process. Our other releases, we would go into the studio and wing it. This time, we made a point of being prepared. We spent a lot of time on every song and having enough songs to choose from that we could pick the best ones to go on the record versus trying to have enough time to fill up a record.

Making the record became the thing that I focused on. It’s this duality of sad and happy; it wasn’t necessarily a sad time, it wasn’t a happy time, I just knew I had to focus on something, so it had to be this record.

Do you think the dissipation of the community was a result of people going their natural separate ways, or was there some condition or event that contributed to that dissolve?

Because there are always a lot of students in Montreal, there’s a big changeover of people. About every five years they come and go, but I’ve lived here basically my whole life. Before this record, I was stable here, had a life here, a boyfriend—everything. I guess it was inevitable it was going to change, but, like you said, I wasn’t prepared for it. On tour, I was focused on playing shows, so I didn’t realize what was happening back here. You don’t know how you’re going to react as a person when you’re in that position. It’s interesting to look back and think, Oh, that’s what I did? Make a record? I didn’t cry all day, I didn’t stay home, I wasn’t sad. What are you going to do when you have the opportunity to start from scratch? That started with writing this record.

Touring is so specifically its own thing, with its own weird set of ups and downs. I feel like it relates back to anything you would do that’s really immersive creatively, where you get in a hole of what you’re doing, and sometimes by the time you come out of it, it’s like everything in the outside world has shifted a little bit without you. It’s like, Wait, no one called me!

We call tour “the circuit,” because I’ll see people form other bands more often than I’d see my friends. We’d be on the same routes, often playing the same festivals. It’s the same people, in the same headspace as you: “What time do I load in, what time do I play, what time do I get to the hotel, OK, start again.” It’s a weird cycle you get caught into. Not complaining, I love touring, but the rest of the world doesn’t work like that.

It’s not for everybody, and we’re fortunate that we’re all really responsible, we get along, there are never any fistfights; we’re a happy functioning unit! That makes it so much easier to stay on tour longer. A monthlong tour is no problem, and we recorded our album in New York, and then Costa Rica, directly after—we were together for three months.

What led you to record in those places?

Our producer who we worked with our last record, Jorge Elbrecht, was in New York. What’s interesting is that we were all going through changes: He was in a transition where he wanted to leave the city and wasn’t sure where he was gonna go. His family is from Costa Rica, so he suggested we go there and stay at one of their farmhouses. We built a little makeshift studio in this really old house in the jungle, with nobody around, and spent just over two weeks there mixing. There were some wild things that happened. There are secrets on the record. Some of it’s just for us to remember. ♦