To weep over a character you hate is a truly special thing.

No Joy: Moon in My Mouth 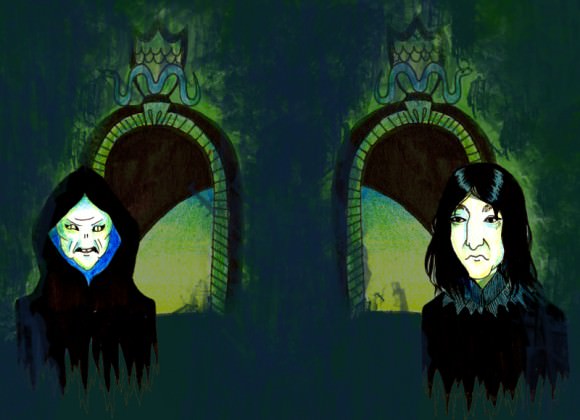 ***If you haven’t read any/all of the Harry Potter books but plan to—READ THIS ARTICLE AFTER YOU FINISH THE WHOLE SERIES. There will be spoilers in this article. MAJOR spoilers. You have been warned, OK?!!!***

I count Harry Potter as my favorite book series, like just about anyone who has been introduced to author J.K. Rowling’s seven-book saga of magic and wizardry. I got into it soon after high school, at the behest of a few friends who all insisted that SERIOUSLY this was the best story-world EVER CREATED. I mean: Imagine if, like Harry Potter, you received a special invitation (delivered by an owl, no less) to a secret boarding school where your lessons were all about mixing potions and growing magical plants and doing spellwork? It was the stuff of my childhood daydreams, and I was so in.

Even if you haven’t read the books (and if you haven’t, you are now entering SPOILER TOWN), you probably know that they have a classic good versus evil premise. There’s Voldemort (aka the Dark Lord), who, with his minions the Death Eaters, is out to take over the world and rid it of Muggles (non-magical people) and half-bloods (half-magical people) because he thinks they are inferior to wizards, and he wants to Have All the Power. Then there’s the orphaned wizard Harry (and his pals at Hogwarts School of Witchcraft and Wizardry), and they are out to stop Voldemort and save the world. The thing is…you know Good (Harry) is going to triumph over Evil (Voldemort). It almost always does, which means there has to be a lot more going on to keep things interesting. In Harry Potter’s case, I came for the aforementioned magnificent, magical world-building, but I stayed for the characters—and not just the ones I was rooting for. I’m talking about THE VILLAINS.

Let’s start with Severus Snape, Harry’s potions professor and a former member of Voldemort’s Death Eater crew. I HATED Snape from the moment I “met” him in the first book. He embodied my fears way more than Voldemort could have because as scary as Dark Lords can be, I knew they weren’t real and therefore couldn’t hurt me. But super cruel teachers? They were the ACTUAL WORST. The HP character I relate to most is Harry’s friend Hermione Granger, a book-smart overachiever. When, in classroom scenes, Snape ignores Hermione’s raised hand, treats her like a simpering fool, and basically chastises her for being smarter than everyone else, it BURNS. I nod along every time Harry insults him for being greasy-haired or suspects him of being aligned with Voldemort because of course he’s evil!

In my despising Snape, it eventually dawned on me that Rowling had me right where she wanted me: I automatically believed he was straight-up terrible, but—especially as I learned more about his history and motivations—I had such a strong reaction to him because I cared about him. I was talking to a friend recently and had an OMG, ME TOO!!!! moment when she mentioned that the character she was reading to find out about at the end of the whole Harry Potter series was Snape. Like me, she figured that Harry would be the hero, but we were way more invested in finding out what made Snape tick, whose side he was really on, and what would become of him.

In the final book, Harry Potter and the Deathly Hallows, Snape dies and Harry uses Snape’s tears to see the dead professor’s memories. I cried because DUH, there was so much more to Snape than his mean-teacher exterior! He’d been a socially awkward kid. He adored Harry’s mom, Lily, but was bullied by Harry’s dad and his friends, who maybe weren’t as perfect as they seemed. The bullying drove Snape to the dark side, but his love for Lily brought him back around and motivated him to sacrifice his life for Harry and the forces of good! He basically let everyone hate him!!! OK, so Snape did betray people and was a bully himself (especially to his students), but that didn’t make him evil. It made him seem human!

Harry’s nemesis at school, Draco Malfoy, was another character I automatically hated. He was smug, wealthy, and elitist—and so was his dad. In the sixth book, Harry Potter and the Half-Blood Prince, Voldemort summons Draco to kill the beloved Hogwarts headmaster, Professor Albus Dumbledore. For Draco’s deed, the Malfoy family would be honored by Voldemort and his Death Eaters. Draco acts like he is totally up to this task, which is deplorable in and of itself, but it becomes clear that it is an act. He’s scared. He’s just a kid, and he’s been asked to perform a horrendous crime. I don’t like Draco or forgive him any of his awful behavior—and I have a lot less sympathy for him than I do Snape—but I get it. Who hasn’t felt pressure to prove themselves to or for their family?

As it turns out, Lord Voldemort wasn’t born evil, either. His father was a Muggle, and his mother was from a wizarding family. Voldemort’s father abandoned his mother before he was even born, so I can understand why he harbored some serious resentment toward Muggles. I can also understand why he craved power and control. I still utterly despise him and the evil he stood for, but I thoroughly enjoyed reading about how he got there.

Around the time the fourth book, Harry Potter and the Goblet of Fire came out in paperback, I was getting a degree in fiction writing. I was a work-study student in the fiction department’s office, where I was basically paid to sit around and read or write when there wasn’t anything to do—and in the summer there was NOTHING to do. So I just read Harry Potter all day. My friends at work read Harry Potter all day. Then we discussed Harry Potter all day. We went on at length about how much, as writers, we admired how Rowling’s vivid, interconnected character development made Harry’s life at Hogwarts seem so real. We loved the way that, magical as it was, what happened at Hogwarts paralleled what happened in the real world. (In Harry Potter and the Order of the Phoenix, the way Cornelius Fudge, Minister of Magic, handles the return of Voldemort seemed, to us, very similar to how then–President George Bush and Prime Minister Tony Blair ran the U.S. and U.K.’s “War on Terror.”) Now that I’ve read the whole series (*ahem* quite a few times), and have written a couple books myself, I’ve come to appreciate Rowling’s villains as being equally great and important.

As a writer, Rowling and Harry Potter taught me how essential it is to create multidimensional characters, especially bad guys, and how to slowly unravel their backstories. This might sound weird, but I can only hope that some day I’ll write something that can break my readers’ hearts the way Rowling broke mine when Snape died. To make someone weep over a character they hate is to have invented someone as complex as a real person. ♦