Literally the Best Thing Ever: The Parent Trap 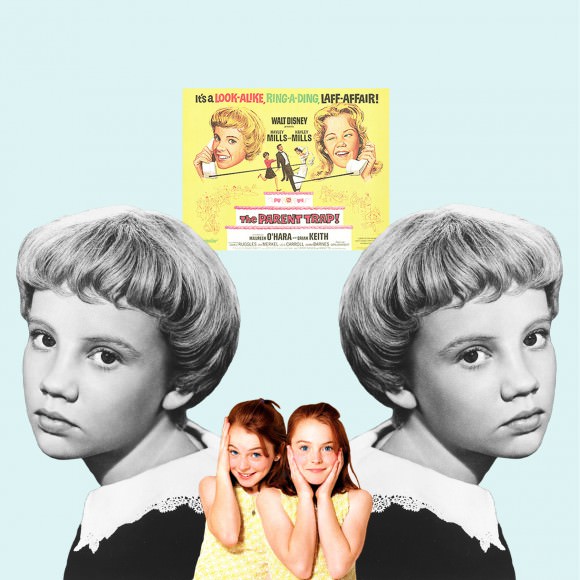 “The nerve of her, coming here with your face!” is perhaps the best line in cinematic history. It’s ridiculous and creepy, and delivered with such sincerity that you can’t help but laugh at how absurd it is. The line comes from the 1961 film The Parent Trap, which, I should mention, is Literally the Best Thing Ever.

Let’s get this out of the way before fisticuffs break out in the comments: I like both versions of The Parent Trap, and I know that many people grew up with the Lindsay Lohan version, which is perfectly acceptable (I mean Lindsay is so cute and her British accent is fake but endearing and she has that whole wacky handshake thing with her butler or what have you: delightful), but my heart, and consequently this LTBTE, belongs to the Hayley Mills version, which I obsessed over as a kid and still love to this day. Everything about the movie is perfect—the opening credits, with their ’60s stop-motion animation and a theme song sung by eternal teenage royalty Annette Funicello and Tommy Sands, are so dreamy and fun and set the mood perfectly for a movie that is both surprisingly dark and genuinely funny:

The premise of The Parent Trap is a little wacky—twin sisters, both played by Mills, who have been separated since birth by their divorced parents and don’t know of each other’s existence (!)—meet up at summer camp and become instant enemies based solely on the fact that they have the same face, which is absurd. I’m not even sure why it makes them enemies to begin with—my guess is that they subconsciously know something’s up and lash out at each other due to fear. (Wouldn’t you? If someone showed up to camp with my face, I’d probably be a little creeped out, too.) Despite their physical similarities, the girls are very different—Susan is from California and likes the ’60s dreamboat pop star Ricky Nelson, riding horses, chewing gum, and biting her nails. Sharon is from Boston and is very proper, with excellent posture and the air of someone who has taken a lot of etiquette lessons about her. Even their accents are different, due to their bicoastal upbringing. For example: when using the word aunt, Sharon says auhnt, where Susan says ant. Susan’s home life seems looser, less structured, filled with California sunshine and camping and ranching and swimming in her pool, while Sharon’s is filled with music lessons and a grandmother who constantly critiques her behavior (“don’t slouch!”). Susan has never met her mother—but she’s seen her picture, and thinks she’s “sensational.” Likewise, Sharon has never met her father.

Without giving too much away, the twins eventually have to deal with one another (a disastrous incident with a pink dress and a camp dance refreshment table cake is involved) and they discover that they share a birthday, a tendency to get goosebumps when something big is about to happen (I have twin friends who refer to this as “twintuition”), and, finally sealing the deal, Susan gets a look at Sharon’s mother and realizes it’s the same picture she has seen of her long-lost mother at home, cementing the fact that the girls are, in fact, twins, not just doppelgangers. Here’s where things get a little weird: The girls don’t seem to lament that they’ve been apart for 13 years and unaware of each other’s existence as much as they seem bummed that their parents couldn’t work it out and stay a family. So they decide to set the “parent trap,” and use their last weeks at camp to practice imitating one another so that they can switch places and meet the parents they’ve never known (as well as eventually reunite said parents when they finally reveal their deception). And also sing this song:

When Susan and Sharon decide to become one another, it brings up a lot of interesting questions about identity and how we define ourselves. As identical twins, the physical similarities are striking—Sharon cuts her hair to look like Susan, and it becomes impossible to tell them apart. But the girls are smart enough to know that looks alone won’t fool their parents and grandparents—they take their roles seriously, committing like method actors, with Sharon biting her nails because Susan does, and Susan putting on a Boston accent to sound more like her sister. It is fascinating watching them freak out over each other’s clothes, figuring out what they’re going to wear when they go “home,” and try living as someone else for a while. They need to learn everything about each other—the names of everyone they know, the layouts of their houses, the kind of vocabulary to use or avoid. The twins are quite different in many ways, but the more they observe each other, the more effortless their switch seems. The Parent Trap is an interesting study of nature versus nurture—here are these two people with identical DNA who live very different lives, due to the influences around them, and yet still feel connected to one another. I always loved the idea of pulling something, in Susan’s words, “so crazy that it might work,” off like this in real life. The whole idea of identity—that how we dress, act, speak, even details we think people may not notice about us, like bitten nails and gum chewing, is fascinating, and as a kid I wanted a chance to try it myself, to be a version of me that came with some sort of directions, some idea of how other people perceived me and how best to play along.

Beyond all the psychological intrigue, this movie is marvelous and the best for several reasons. One is the aesthetic: 1961 summer camp, followed by 1961 California and 1961 Boston, where the girls respectively travel after making their “switch,” and deciding to try on each other’s lives. The sets are killer and the wardrobe is to die for, specifically everything worn by Maureen O’Hara, who plays the twins’ mother, Maggie, and has the greatest Technicolor-red hair. Mid-movie, Maggie gets a makeover that I swear is still the best movie makeover of all time—you can actually see her confidence levels shoot up just from a touch of makeup and new outfits. The clip isn’t online, but look at this green suit! Too good: 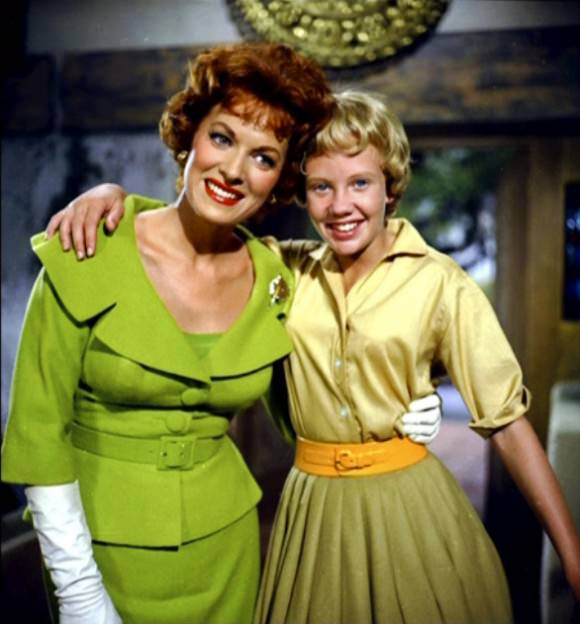 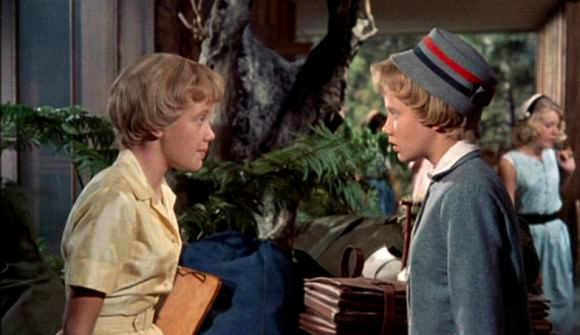 The supporting cast is fantastic: Verbena, Susan’s nosy maid who “never says a word, not one word,” the twins’ grandparents, who have strong Emily and Richard Gilmore vibes due to their Bostonian properness and tendency to view manners and decorum as paramount to all else; and, most notably, the film’s central villain, Vicki, a gold-digging snob who wants to marry the twins’ father and send Susan off to boarding school. Vicki is so mean and so terrible that she’s kind of the greatest, if you know what I mean. She says things like, “Oh, honey, don’t you play with the big girls. You’ll be in way over your head,” and disdainfully refers to the girls as “pet.” You love to hate her, and the movie makes no attempt to make you feel any kind of sympathy for her (or her meddling mother, also loathsome). She is, in that way, a classic Disney villain—cold-hearted and selfish and beautiful, the destroyer of happy families, only looking out for herself. She’s fake and stuck-up and maybe my favorite character in the film because of how purely villainous she is. (And her wardrobe is also pretty stellar—so many great dresses and killer accessories).

There are very few perfect movies out there, and though this one has obvious flaws (kind of messed up to separate your kids for 13 years and not tell them the other one exists, no?), it’s such a goofy, romantic story that you can’t help but get sucked in—I love the idea of long-lost twins, of getting divorced parents to fall back in love, of recreating a family you didn’t even know you had. As a kid, I daydreamed about going to sleep-away camp, where I, too, would meet a long-lost twin and get to switch identities for a few weeks. The idea that there was another me—a better me, I thought, with better clothes and a horse in California, like Susan’s—was comforting, especially on the days when I didn’t like myself very much. And the idea of trying to pull something like that off—being such a good actress that I could fool my own parents—was thrilling. There’s also something sweet in the idea that long-lost loves can still reconnect, that families can piece themselves together after being torn apart, and that there may be someone on this Earth walking around who is basically our twin—if not in actuality, maybe in spirit—that hopes to someday meet us too. To believe in serendipity (also the name of the twins’ camp cabin is to believe that fate can bring us the happiest surprises, and nothing could be greater—say hey, alligator! ♦

literally the best thing ever the parent trap