Who doesn’t love the triumph of good over evil, even if it IS super fake? 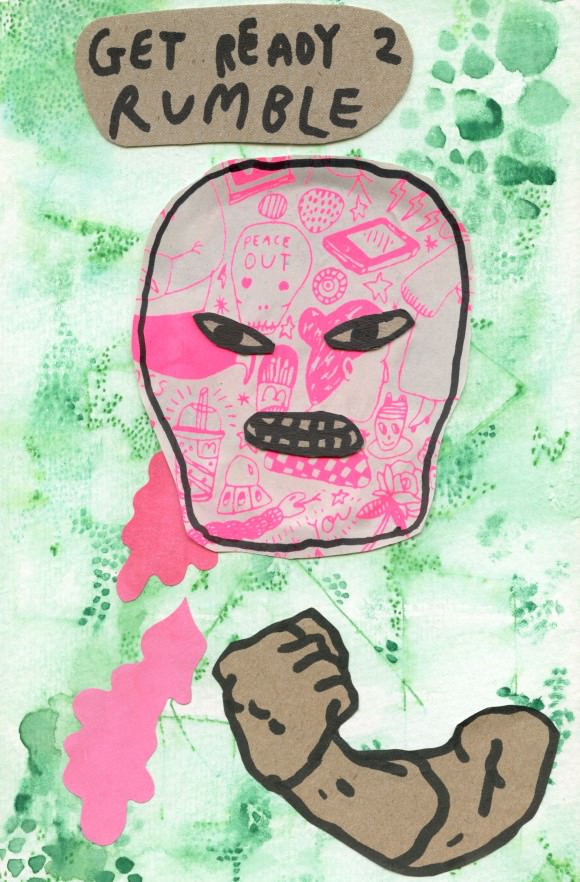 When I was a little kid in the 1990s, I swear every boy in my class had a Trapper Keeper with Stone Cold or The Rock on it. I couldn’t understand why everybody was so obsessed with pro wrestling: All I saw were greased-up bald dudes in leotards fake-slapping each other over tacky belts and imaginary girlfriends. As the camera panned over the audience, I watched dudes in NASCAR baseball caps holding plastic cups of beer, screaming at the camera for one wrestler to kill another. The sweaty, cartoonish masculinity of it all struck me as totally embarrassing. Plus, everyone knew it was fake…right?

Then I met my high school sweetheart. He had grown up loving pro wrestling, and he studied it like Greek drama. Over the years, he taught me about wrestling in a way that helped me understand not only the physical intensity of the sport, but the intricacies and nuances of why it’s so beloved in American culture. Once it finally clicked with me, I was mad that I didn’t get into it sooner, because it turns out pro wrestling is literally the greatest sport that’s ever existed.

Wrestlers work hard to develop characters that are both massively outlandish and easy to identify with. Though they may be acted out in the most extreme ways, wrestlers’ over-the-top personalities contain aspects of who we are as people, as well as who we want to be in our superhero daydreams (as John Steinbeck said, “One must distort one’s own way of life in order to simulate the normal in other lives”). Wrestlers’ personalities often fit into the Jungian archetypes—personality types distilled from world mythology and history, meant to represent and help us understand the broadest swathes of common human experience. Everyone who loves wrestling has an all-time favorite wrestler for this reason—it’s usually whichever wrestler most closely mimics your lived experience. It’s always thrilling when someone who looks or acts like you wins (which is why I took a liking to the indie wrestler UltraMantis Black, who also plays in punk bands!).

Of course, there’s no winner without a loser. Rivalries are inarguably the greatest part of wrestling: Backstories built on elaborate alliances and vendettas are unraveled so slowly that fans are sometimes left hanging for years. Feuds happen both in the ring and backstage, where the cameras will catch a wrestler “cutting a promo,” or giving an on-camera interview which usually leads to divulging hot gossip, name-calling, or one wrestler challenging another to a match. The most climactic moments in the history of wrestling involve huge blowout matches where two famous wrestlers kick the ever-loving snot out of each other (or reunite to go forth and kick much ass, in the case of the below video featuring “half-brothers” from hell, Kane and Undertaker) after months or even years of feuding.

Generally, in order for a feud to work, there’s gotta be conflict between a “heel” and a “face.” The heel is the archetypical bad dude who says nasty things, cheats in the ring, steals somebody’s girlfriend or manager, joins up with a terrorist faction, harnesses the power of Satan to defeat his enemies—you know, bad-guy stuff. He needs to exhibit crappy enough behavior that the audience will have fun hating him, jeering at him, or bringing nasty signs to events.

In contrast, the “face” is the hero who people usually want to win. Historically, he’s an all-American good guy (and usually sort of a babe), though many find these types of faces to be sort of boring due to their homogeneity and unwillingness to create controversy. Faces can also be anti-heroes whom everyone loves and wants to win despite their being kind of a jerk. Stone Cold Steve Austin might be the most famous example of this kind of face—he dressed in black leather and took on the role of a swaggering, anti-establishment badass who loved to lip off and say sassy shit to his competitors—though The Rock played a similar role, as did Mick Foley in several of his wrestling personas (though it’s very important to note that Foley is the ultimate IRL face—he’s notoriously the nicest guy ever and spent his career doing things like befriending Tori Amos and working as a call center operator for rape crisis hotlines).

Sometimes a wrestler will transition from a face to a heel and back again over the course of a number of years. When promoters catch audiences cheering for the supposed bad guy to win, his managers might have him become a sort of anti-hero for a while—that is, until he kicks the wrong guy’s ass, and then he’s exiled again. Take what happened to Hulk Hogan: His partnership with Macho Man Randy Savage, as two-thirds of the tag team The Mega Powers, turned sour when Macho Man got mad about something that happened in the ring and slapped Hulk Hogan in the face. This led to a giant blowout fight over someone stealing someone else’s girlfriend and title belt. This betrayal turned Hulk Hogan into Hollywood Hulk Hogan, an egomaniacal lunatic bad guy obsessed with being the greatest wrestler in the world:

The remarkable thing about these theatrical turns is that it’s made to look as if wrestlers come to these massive shifts in character and personality very organically. You never learn who writes the character of Hollywood Hulk Hogan, nefarious leader of the New World Order, and frankly, you don’t really want to know—you’re taught that this shift happens because he was betrayed by his best friend at the SuperBrawl. Before you know it, you’re sucked into the interpersonal drama like a soap opera. How could you do that, Macho Man?!! It’s like watching a magician—you know what you’re seeing is an illusion, but the pleasure you experience comes from a serious suspension of disbelief.

Rarely, famous wrestling feuds—like the one between Bret Hart and Shawn Michaels, two popular wrestlers prized for their athletic prowess who were so similar as to be constantly put up against each other, year after year, in a long-running battle of wills—will carry over from the ring into real life. Hart and Michaels tangled in what came to be known as the “Montreal Screwjob,” an infamous match-turned-conspiracy-theory that made fans question just how “fake” wrestling really is. Knowing Hart was about to leave the WWE to sign with a rival wrestling organization, the owner and supreme evil overlord of the company World Wrestling Entertainment, Vince McMahon, manipulated the outcome of a pre-determined match at the last minute to make sure Hart lost his championship title before quitting. This led to McMahon, who frequently got in the ring himself, becoming one of the most infamous Heels in the history of the sport. Fans loved it—after all, who wouldn’t want to see their terrible boss get beat up regularly?

There are some dudes who exist in the weird interstice between good and bad, lingering somewhere around “super freaking strange”—the kind of guy who exists in a rivalry with the whole world. In the ’80s, the Ultimate Warrior feuded in the ring with André the Giant and Hulk Hogan. With his giant hair-metal coif and acid-lifeguard singlets, he became weirdly beloved by fans who followed his extremely bizarre promos, including what might be the greatest wrestling promo of all time, where he goes bananas on Hulk Hogan:

But Warrior never really defined himself as either a bad guy or a good guy. He was just a weird guy. This meant that fans couldn’t really place him as a face or heel, which eventually hurt his career. There’s a good lesson here about committing to your character. Whoever you are, be that person boldly, no matter what your haters say. You will go further if you’re willing to define yourself and stand up for what you believe in.

Humans define things in relation to their opposite: One can’t know light without also knowing darkness, as light and darkness need each other for both to exist. For people like me, who’ve been bullied for being little weenies for most of our lives, it’s just as amazing to imagine being the hero who saves the day as it is to be the bad guy who gets revenge. Wrestling is so amazing and important because, with a little suspension of disbelief, you can work through your experiences, frustrations and feelings through the greased-up bohunks blessing your screen. That’s the real lesson to take away from wrestling: Face or heel, at the end of the day, everyone wins. ♦