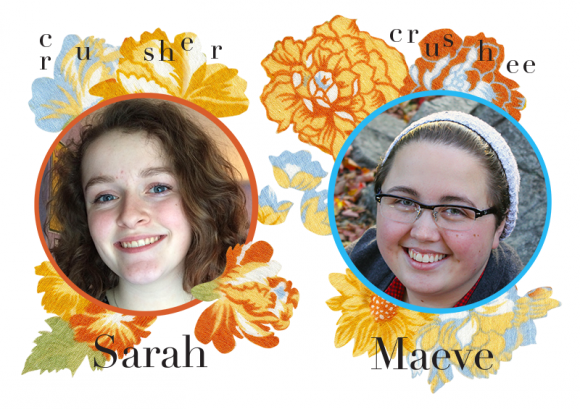 Sarah and Maeve are sophomores at the same high school in Cape Cod, Massachusetts. For just over a year now, they’ve been cracking each other up with A Christmas Carol–themed jokes, and hearing them talk about how much they love each other is a gift.

I want to nominate my friend Maeve for Friend Crush. I met Maeve last year, and the first thing I thought when I saw them walk into English was, Oh my god, they’re gorgeous, I love their hair, don’t say anything to fuck it up! And I guess I didn’t because we have basically been inseparable since! They used to go to a Catholic school, so we make lots of cracks about religion (to uphold our sacrilegious, angsty teenage façade). We also bond over Mr. Magoo’s Christmas Carol. We have the same sense of humor, and I could talk to Maeve for hours. Maeve always smells soooo good, like cinnamon and warmth, and they give great hugs.

I feel completely comfortable with Maeve, and I honestly think they’re my soulmate—not in a relationship way, but I’ve never met anyone else that I just click with. Maeve’s the best friend in the whole world, and they deserve everything good. When I am not with Maeve, I feel like something’s missing. They mean the absolute world to me, and I would do anything for them. I should be doing my homework right now, but I want to talk about them and proclaim my love!

SARAH: [Laughs] OK, so last year Maeve and I were kind of friends, I guess, and I don’t even know how we got talking about it, but I thought I was the only person ever to see Mr. Magoo’s Christmas Carol. But they were like, “No! We watch that all the time at Christmas!” That was one of the first things we ever bonded over.

When I read your email, I thought that was so funny because I thought I was the only person to have ever seen Mr. Magoo’s Christmas Carol!

It’s that one obscure Christmas movie! I don’t know how anyone else has even, like, found out about it!

After that, how exactly did you two bond?

Last year, we both had the same English teacher, Mr. O’Toole, and he’s been friends with my dad since, like, the ’80s. He loves Mr. Magoo, too, so we all got to talking about it, and we ended up forming a Magoo Club! We met Wednesdays after school, and it was just me, Maeve, our friend Shelby, and Mr. O’Toole. We would watch clips from [Mr. Magoo’s Christmas Carol], and Mr. O’Toole would bring up different versions of it on YouTube. We’d also talk about other stuff, like drama club, which we were all a part of, and school and stuff. It was basically just us gossiping with our English teacher!

What are some of the other things you and Maeve have bonded over?

Another Christmas related thing, actually! Albert Finney’s Scrooge, the musical version. We make fun of that a lot. And we both really like Sherlock, Harry Potter, and Doctor Who. I thought it was really cool that Maeve knew about all of that stuff, because they used to go to this very religious private school. I thought that they were going to be, like, crazy religious, whereas I’m not really that religious. But whenever we’re together, it’s really comfortable. They’re one of those people that you can hang out with and not have to talk. You can even go to their house and just go to sleep. It’s like being home!

Why do you think you’re so comfortable with each other?

I’ve never really met anyone quite like Maeve. We work really well as a pair. I came from the public school in our town, so I knew everyone and had already had my friend group and stuff. But when I met Maeve, they were so different from everyone else. I mean, they’re so confident and attractive and cool that I felt like, Oh no, don’t say anything to them—but I really want to be friends with them!

What do you see in Maeve that you don’t see in anyone else?

I think their openness, as a person. They’re really nice, and genuine, and not…I mean, in high school, you don’t really find a lot of friends who are kind, and who will talk to you about anything, are there for you, and always text you back and stuff. I think that’s what’s unique about Maeve: They’re always there for me. They are a genuinely great person! 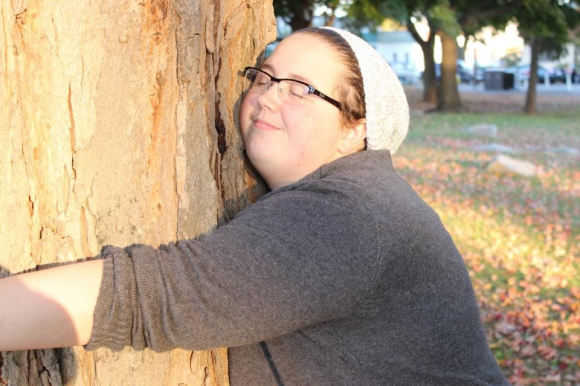 Photographic evidence that Maeve is as good at hugging as Sarah says!

Aw! Whenever I do Friend Crush interviews, I always end up half in tears. You are both so cute!

[Laughs] We were looking through Friend Crush interviews together, and we were both like, “Oh my God, this is gonna be so cool!” We’re going to email it to all our teachers and friends and stuff. We’ll read it at Magoo Club!

It’s really diverse, actually! I hear about high schools where there are different cliques and stuff, but that’s not really what our school is like. I have friends and acquaintances all over the place, you know? I have friends in drama club, and I have friends on the sailing team, and I’m also friends with some of the more, um, popular people, I guess. It’s a really open place, and everyone is accepted there. It’s a very cool, multicultural place.

Has your friendship with Maeve helped you through high school?

It’s helped so much! I honestly don’t know what I would do without Maeve in school, because I know I can text them anytime, if I ever feel like I’m going to have a panic attack, or if I feel really depressed. We’ll meet somewhere and talk. It scares me to think about having to face high school without Maeve. They’re such a constant for me, and part of why I want to go to school every day is to see them.

How does Maeve balance you out?

We always talk about this actually! People say that I’m always looking for attention, which is true, I’ll own up to that! I’m kind of a show off, but Maeve is so down-to-earth. We have the kind of relationship where they’ll tell me, “Sarah, stop showing off, you’re embarrassing yourself.” Also, I get really nervous when I’m meeting new people, but with Maeve and me—we’re funny together, so we can easily talk to people. I think they help me be less annoying, to be honest!

What are your favorite inside jokes with them?

There’s this one part in Scrooge where the Jacob Marley character was filmed walking backwards through a door, so he’s like, all fluid, and his hand’s still there, and we think it’s so funny!

Oh my god! I know exactly which part you’re talking about!

It’s so funny! We take videos of our family members recreating that part and send them to each other. They have one of their brother doing a spot-on impersonation of Jacob Marley in that scene—it’s literally so funny!

You guys have a very A Christmas Carol–based sense of humor!

I know! I don’t even know why though! Last year, actually, we were both in the play Shop Around the Corner, and we were both just cracking each other up backstage. We were acquaintances at that point in time, but that’s when we really became friends. I thought I was the only one who’d seen both Albert Finney’s Scrooge and Mr. Magoo’s Christmas Carol, and we just made each other laugh so hard over them! It was awesome.

What are your favorite memories of hanging out with them?

I don’t have any particular memories, I just like being with them all the time! I’m always thinking, “Oh, I wish Maeve was here to see this!” I wish we were, like, attached at the hip all the time. I really enjoyed having sleepovers with them last summer with friends; we’d sneak out at night and walk around and it was just so much fun being around them.

What do you admire most about Maeve?

How strong they are. They have…I don’t know, not like a lot of problems, but they’ve definitely had a tough life. But they are still always there for me. If I’m having a rough day, they are always there to talk to me. They are so resilient and strong. I’ve always admired that about them, that they can always be there for their friends.