How she became her own right-hand woman. 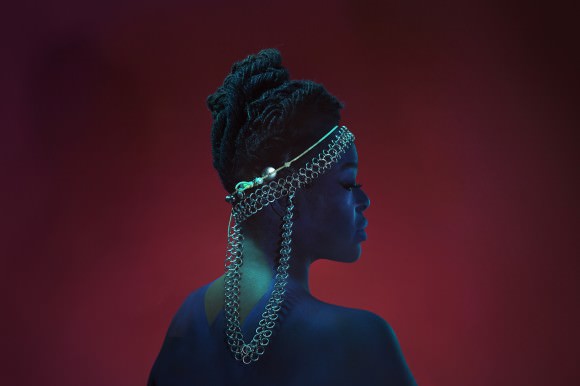 Eska Mtungwazi is a singer, songwriter, teacher, and musician whose collaborations with Grace Jones, Zero 7, and many others have earned her a formidable reputation as a singer with style. On her way to becoming an artist in her own right, Eska released an EP called Gatekeeper in 2013, which received a ton of love. Her brand new, self-titled album ESKA is set for release on April 27, on Naim Edge Records. You can listen to our exclusive premiere of “Boundaries,” a track from her new record, right here:

I talked to Eska over the phone about heritage, her “weird phase,” and trusting the tiny voice inside you.

You moved to London from Zimbabwe as a child. How did that transition shape your experience growing up, if at all?

I didn’t really have a strong network that I could relate to in terms of my origins or roots because there was no big southern African oasis in South East London. My experience with Zimbabwe was very much connected to family, but as for somewhere I feel I can call home—that’s a difficult one. This record has actually been me defining who I am through developing an appreciation of my southern African heritage, my British heritage, the places where I’ve spent time, and the places that have impacted me the most.

Zimbabwe is there [in the record] because it’s in my parents, and it’s in my blood. London is there because it’s in the air I’ve breathed, and I adopted its culture at such a young age. Through all of my traveling, London has always been the home I return to. But it’s been hard to come to terms with who I am because it’s a struggle, as a first generation immigrant, to find peace and accept who you are, where you are, and where you’re going to remain. Does that make sense?

Completely! My family is from Denmark and I haven’t been able to spend much time there, so what you said resonates with me.

That’s so interesting! I always think of the U.S. as the homeland of the immigrant. If one can embrace and make something of belonging to one place but having [roots in] another, it can really be glorious and powerful rather than disorienting. London is a very cosmopolitan and multicultural place, but growing up I still felt foreign in the black community. Over time, I’ve realized that you can either become quite insular about being “other,” or you can just embrace yourself.

During part of my teens I tried to be the weird girl and got a kick out of it because no one could point their finger at me or fit me into any agenda. I didn’t feel the need subscribe to any culture, which was liberating! I suppose that experience had an effect on me artistically. I never made that parallel until you asked that question! Do I pay you now or later? What a fantastic therapy session!

I still long to discover Zimbabwe. It calls to me, it speaks to me, and there’s something about it that makes me deeply emotional. It’s in the language I grew up hearing my parents speak, the culture I experience at home. But I’m very proud of all of the influences that have shaped me in this culture clash that I’m part of.

I’m interested in your creative origins. Did you start making music when you were young?

I was drawn to music strongly from such an early age. I could lose myself in music. It was a liberating experience to play and compose music as a child. I was songwriting at 11, but I don’t say that to sound exceptional. For some reason it came naturally to my brother, my sister, and me. We thought, “We’re having piano lessons so let’s write songs! Let’s create sounds of our own!” I certainly felt very free to express myself and to find out who I was on a deep level. It’s limitless what you can discover in music.

Was making music how you established a sense of belonging?

Growing up, I felt quite different. Within the black community I felt quite other, since it was unusual to have this little black girl playing classical violin and going to a music conservatory. My family wasn’t wealthy and getting a scholarship to [music school] opened up a world that was so different. Music helped me accept being different. I could be different, I could be other, I could explore new things, and that was pretty cool.

The other students and I came from all walks of life but came together as an orchestra to play the same notes on the page, united by sound. I remember going to summer schools, hopping on the bus, and traveling across London to meet all these kids who I’d never met before. Again, we were just united by the notes on the page. It was glorious! I loved being challenged by opportunities to explore sound and different ways of hearing or playing music. It was an acknowledgement that I was different, and I felt like I could finally do whatever I pleased.

But in the end music became an escape. I asked myself, “You’ve explored and explored and explored, Eska, and that’s great, but who are you? Have you found yourself in all your explorations?” I realized I was becoming more and more scared to actually answer that question. It became very convenient to keep on collaborating and exploring different sounds. It was my comfort zone, a way to avoid bringing final definition to myself.

I stayed in that mode of thinking for a while, because the music industry is so unforgiving for women. Because there wasn’t really anyone who looked like me or sounded like me I thought that the industry wasn’t interested in anyone like me. No one actually told me that, I just wrote myself off. I was intimidated—too intimidated to even admit that I wanted to be an artist. Eventually I had to take that leap, hence the birth of this record.

What jobs did you work before you were able to support yourself as a musician?

I was teaching. I trained as a math teacher, but I also taught music, led choirs, and did other types of work in academia. I’ve enjoyed it, but I had to keep it in check because with teaching and music, 100 percent is never enough. To be great you have to give 300 percent, and the problem with that is it can take over your life. Having two great loves was immensely difficult. It meant I didn’t sleep. I averaged about three or four hours of sleep each night.

Oh my! How long did you do that for?

Years! I’ve done it for so long that I function on about six hours of sleep. But I’m not proud of it and know it’s not the best. Oddly enough, now that I have a child I’ve gotten better: She’s teaching me to sleep! [Laughs]

What advice would you give to young girls embarking on creative endeavors?

There no big overarching statement, but something that applies to everyone is, continue to explore who you are. Explore, explore, explore. And acknowledge the little voice in the back of your head. That faint little voice, so small that the wind is stronger than it, is something that we all hear. Learn to respect that small voice, learn to respect it.

Most of us—women especially—think that we need to see so and so, or talk to such and such about what we need to be doing. Often, in the music industry, we think that we need some Svengali-type manager or producer, often male, to make things happen. But we don’t! And that little voice is telling us that we’re a producer, or an engineer, or that maybe we can do the arrangements. But there’s this big old monster gorilla that’s saying, “No, you need that person!” If you learn to give power to your little voice, you’ll realize that those thoughts aren’t true. Trust the voice, and it will become your right-hand woman!