“Be loud, be boisterous. Do what you need to do.” 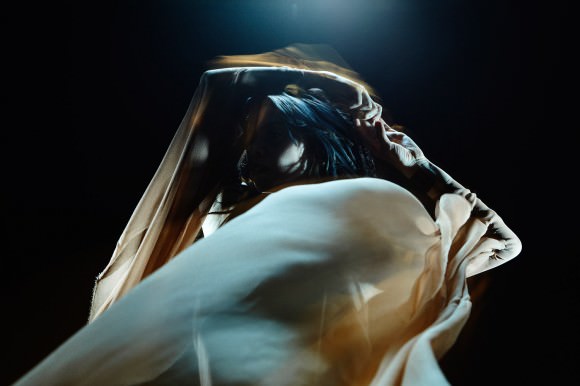 Azar Swan is the musical project of the singer, songwriter, and musician Zohra Atash and her collaborator Joshua Strawn. Zohra grew up loving punk rock, a scene that she credits with helping her to figure out her place in the world. Her style and sound are rooted in contemporary goth aesthetics, post-punk, and industrial metal traditions. This track “Hush,” is from Azar Swan’s second album And Blow Us A Kiss, and we’re so excited to premiere the video right here:

I recently sat down with Zohra for coffee. We talked about her childhood, how she became a musician, and how finding community isn’t just beautiful, but crucial.

MEAGAN: One thing that really struck me when I was watching your performance at the Slutist’s Legacy of the Witch Festival was how you are so into collaborating with other awesome women doing awesome things. Like the costume designer Jenni Hensler. That’s great, because I think a lot of women feel like they’re in competition with other women. Can you talk about that?

ZOHRA ATASH: I’m actually the first female musician that Jenni Hensler worked with. She was at a bar, and we got talking, and got along really well. It was great to have someone who understood my aesthetic. I’ve always been very hands-on with anything that goes into my music or on my body. We also collaborated on the cover for my first record with my old band, Religious to Damn. We just went through my things and picked out little pieces, and it came together beautifully.

When I meet women, I have to see that they’re doing something that they are psyched about, or it just won’t work. If your value system includes doing things solely for male attention, I’m just not as interested, and it’s not a part of what I do. The fact of the matter is, it’s difficult to be a woman. And I feel like a lot of strong women continually get shit on. We have to look out for each other. Plenty of women are awful to other women and it’s so disappointing because it’s like, they should know better?

Internalized misogyny breeds a lot of the contempt and mistrust that women have for each other.

Exactly! At the end of the day, we are all on the same journey.

Totally. We all deal with sexism in professional arenas. How has being a woman impacted your experience as a musician? Do you feel like you’ve had to subscribe to certain outdated ideas of what it means to be a woman who makes music?

For a time I was getting excessively compared to Kate Bush. I don’t mind, I like Kate Bush! But then it’s like, yes, so what, I’m a fan?

Right! It’s not like every singer dude with a guitar gets immediately compared to Bob Dylan. Even if you’re a woman who is even the slightest bit on the darker side of things aesthetically, it’s like “Oh, tell me about how much you love Kate Bush and Elizabeth Fraser!”

Why wouldn’t I love them? I have always gravitated toward female artists. I have always been, unabashedly, a fan of other female musicians. I see the beauty and strength of other female musicians. Jokes about Lilith Fair [a music festival where only female solo artists or female-led bands could perform] aside, the organizers had a point. Even today, you can delete the all-male acts from festival lineups and like, three bands are left! Women making music is not a trend, it’s something that we have always done, we just don’t get a lot of recognition for it. I don’t think equality is so much to ask for.

In the music world, there are all these games you have to play, and I’m not here for that. I’m not here to make people feel bigger or smaller. I’ve been doing this for a long time. If I had played the game, I would be much further along than I am now, and the rewards would have been greater. But they are fleeting rewards.

I really do believe that people are looking for integrity and honesty from artists. There’s no divide anymore. You used to be able to create a gap between musician and listener, but we’re so dependent on social media nowadays and people can tell when an artist is being disingenuous. Even if they buy into it for a few minutes. It just creates an ego, and I think an [unchecked] ego can be very dangerous. I’m happy to be humble. My family humbles me.

Your family moved from Afghanistan to a conservative part of the United States. Can you tell me about your upbringing?

I have three sisters, and a background that was—I don’t want to say hostile, because it wasn’t always, but it became hostile. There’s a disconnect between the freedoms of a man and a woman. You’re expected to be pure, but educated. Independent, but not sexual—but sexually available for marriage. But until then, sex isn’t talked about. I remember asking my mom about the mechanics of the changes happening with my body—the things you can’t see—and she was like, oh, that will clear itself up when you get married.

What did she mean?

I had no idea! It still makes no sense to me. I was like, “I can’t believe you said that to me!” Like…okay? But curiously, there’s no cultural climate of competition among women. I certainly didn’t feel it. There’s a communal aspect—you do things for the greater good of the family. And my sisters and I had different strengths.

Were your parents supportive of your music?

I suppose my parents were supportive of me playing music, but I did have to fight for that freedom. They weren’t planning on staying in the U.S., so they worked hard to instill the values in us that we’d need to go back [to Afghanistan]. But my father is a feminist, and built girls’ schools, and has said that he feels blessed to have daughters. But my mother worried that people would say nasty things about me. She soon realized that I wasn’t going to sexualize myself like the people she saw on television. I mean, I’m all for that if you want it, but that’s not what I do.

It was a struggle to leave home before I was married. It was a struggle. It was just a very conservative household. My mother was mostly the one conveying this message, that my uncles would never allow this to happen. And I saw this happen in my community, where girls would be intimidated for doing things like going to a bowling alley. If Craigslist had existed back then, I would have wanted to put an ad out for a gay Afghan man so we could have a sham marriage. That’s how much I wanted to get out of the house! It was through the strength of friends that I was able to leave. And I was afraid for years after. I was told that because I was an Afghan girl, my family or another Afghan would come for me. I know that my mother grew up with that specter in her own life.

How did you get your start in music? Was community a big part of it for you, and how did you find your community?

I’m pale, but I’m not white—there are a lot of Afghan tribes with pale skin. But I didn’t quite fit in there, and I’m not American. Where do I belong? The only place where I felt any sort of kinship at the time was through punk. Listening to Heavens to Betsy and lesser-known Kill Rock Stars bands.

Do you feel like punk was a way for you to answer questions about your identity?

It was a way of having an identity that made sense. I felt like I was completely insignificant, and it gave me significance. There were no criteria.

What would you tell yourself as teen, if you could go back and talk to yourself?

I would tell my teenage self is that there is support. You will find people who will not shame you for being who you are. Be loud, be boisterous. Do what you need to do, and don’t allow people to put you down. Nobody should have any say in the timeline of your life. ♦