How to relax before, during, and after boning. 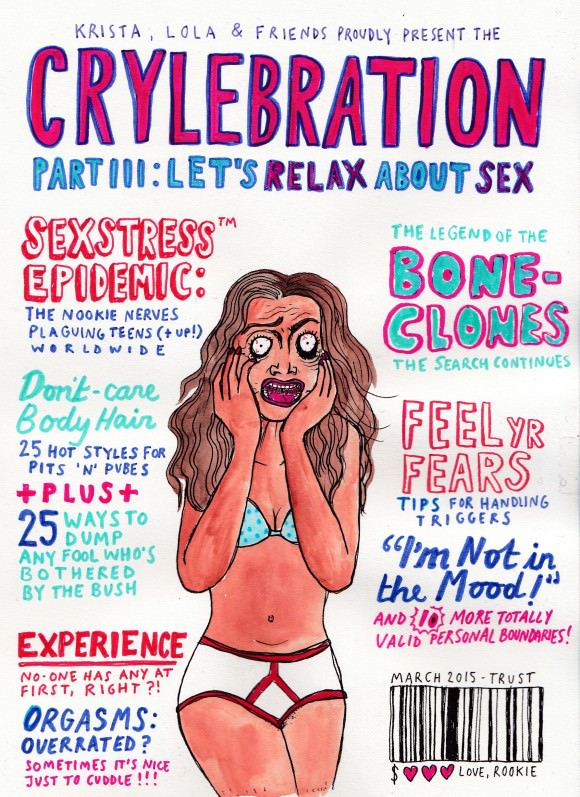 Oh, hello! Fancy seeing you! Come…………..here often? Ha! Ha! Ha! It’s your old pals, Lola and Krista. You’re probably ::tosses hair casually:: remembering our Sex Crylebrations, Parts I and II, and wondering what else could be left to talk about, but there’s so much more! So much, we couldn’t do it alone.

Sex can seem wonderful and fun and good-scary, something that can give you delicious butterflies and make you happy! Sex can also feel bad-scary—just thinking about it happening can cause you stress. What gives? Anyone in this li’l tea circle ever been stomach-churningly anxious before they even tried sex?

LOLA: The first time I had sex with a cis girl as an adult, I moved my hand to her golden area in silent terror, like, WHAT DOES IT DO! HOW AM I GOING TO…! ALL THESE FOLDS! when I heard my babely partner apologize: “I have a tampon in right now…I have my period.” A MIRACLE!!!! I stopped and was like, “Whoa there! ANOTHER TIME, THEN. Not for me, thanks! What a shame!” I was completely ready to pretend I was not OK with period sex before I was ready for her to know I might not know what I was doing.

KRISTA: Ahahahaha Lola! “Duhhhhh tooooootally good at sex, just EW PERIODS…NO! So… um, that’s why we can’t have the sex.”

LOLA: Exactly. I wanted to touch her really badly, period or no! So instead I, like, pretended she was gross? Right. And in retrospect, what’s so terrible about not knowing Everything About Sex Ever? Even if I wanted to play it Smooth Dr. Sex, I could have just as easily asked, “Show me what you want.”

TOVA: AH Lola this reminds me of my first time having sex with a girl and feeling very anxious about many things, but most specifically the fact that I wasn’t shaved. So when she made a move to my nether regions (too gross of a phrase?) I whispered, “I’m hairy,” and pushed her hand away. We saw each other again after that (I don’t know how), and I made sure to eliminate my bush and then MENTIONED IT like, “Ha ha I shaved this time.” She gave me the most confused look, like, Why does it matter? I realized that I was killing the sex-vibe by worrying about my bush, not by having a bush.

NAOMI: Getting freaked out about my pubes is such a thing for me. I wish it weren’t!!! I go through phases of not giving a shit about what hair I have and where, but that’s usually when I am comfortable with the person I am having sex with. I was less fearful about this when I was younger. The first time I got naked with someone, I said, “I don’t shave my armpits,” just before I peeled my T-shirt off (I love how we feel like we have to give people a WARNING). He just shrugged and said, “Meh.” He was a teenage cis boy about to see real-life boobs—would he really have been bothered by any hair situation? People can say all they want about their hair “preferences,” but, in the end, nobody is going to refuse sex on the grounds of a bit of hair when they want the person right in front of them—and if they are, they probably aren’t worth your time.

TOVA: After having lotsa body hair for such a long time, I’ve started to forget that it throws people off. These days, it’s like, if someone is disgusted or turned off by my body hair, then I’m really grossed out by the fact that they can’t handle it. I don’t want to sleep with people who aren’t comfortable with body hair. I’m just not attracted to anyone who feels like they have a say in my grooming practices.

KRISTA: Body hair problems! One thing I didn’t worry about! I dithered over whether I should have sex with my first cis male partner for months. Not only was I not sure I was ready, I was also battling religious guilt (I had just stopped being active in the Mormon church), and I had an intense fear that sex would really, really hurt. But when I finally decided that, yes, this was what I wanted, I got really excited and then also thought for far too long about whether or not I would get blood on his sheets, and whether or not I would have to buy him new ones. Forget the act of sex bringing us closer together—what if it hurt like crazy and WHAT WAS THE PROTOCOL FOR SHEET-BUYING AFTERWARD? I was broke! I needed to know!

ANNIE: This is getting into trauma, but the first thing that I think of when I think of “first sex” is that the idea of what “first sex” is can feel really fucking hard if you either know or think you may have been abused in the past. (Memories of trauma can feel hazy and difficult to pin down, and you don’t need to know when, how, by whom harm came to you to know that you’ve been sexually abused.)

In 2012, I started to identify as trans and came to terms with childhood sexual abuse that I’d repressed for most of my life as a survival mechanism, allll at once. That winter, I dated Z. I only dated them for a few months, but their care, energy, and safe boundaries made me feel like I could let down some of my walls of defenses. For the first time, I felt seen and appreciated as a girl. On our first date, we made out in Schuylkill River Park and I peed off of the walking bridge. As we sat on the park bench, Z. said, “You’re making me want to invite you back to my apartment.” I got nervous and I said that I wanted to, but I wasn’t sure if I wanted to have sex or anything. They said that they had no intention of pressuring me, and that we could watch Buffy and cuddle, or not cuddle, and that I could crash in their couch or in their bed if I wanted to. All my vibes said “yes,” in large part because they made clear their lack of expectations, and because of their open style of communication.

Later, I remember them propping their arms up on the bed, their face looking down at mine, and they said, “What color are your eyes?” I said, “They’re green…or, haaazel…” And Z. said, “They’re pretty.” I sank into the bed. I was very, very happy to have them on top of me.

You get to determine your own firsts. The idea of “virginity” is a cult. None of us get to change what happened to us in the past, but we do hold incredible power over our points of view.

Sex can also feel like a first if you had, in the past, habitually approached sex with any number of things that might have been harmful to you, your ability to connect with your body, and/or your ability to know what you really wanted. I never had sex anywhere close to sober for the first few years of my sexually active adulthood, and I put myself in a lot of really dumb, potentially dangerous situations (…they are funny stories, but they could easily have not been funny). I wasn’t nervous the first times I had sex as an adult because I had blasted most feeling out of my body with substances. I had sex with people who I didn’t really want to have sex with, many, many times, because I was addicted to the attention. I wanted that feeling of care, and I didn’t know how else to get it.

SO. What do you do when you decide that you wanna let the right one in? You can say you’re nervous. No one expects you to be a robot, all cool and unfeeling. The other person is likely nervous, too, because sex makes most everyone shake.