A Guide for Dealing With Flaky Friends 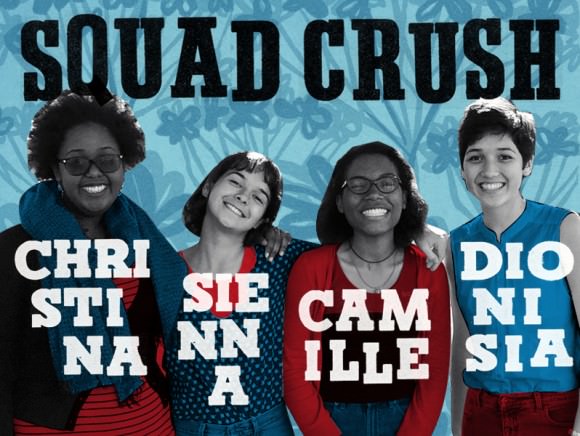 Camille, 16; Dionisia, 15; Sienna, 17; and Christina, 16, go to school together in California’s Bay Area. When they’re not talking about intersectional feminism in the feminist club Sienna started, they’re being tech geniuses with Girls Who Code, having sleepovers they call “Superparties,” and obsessing over Vampire Weekend. They are our first-ever four-person Friend Crush, and calling it Squad Crush was THEIR IDEA. Of course that’s what we should call it! These pals are so smart and so the best, jeez.

Hello!!! I’m Camille and my friend Dionisia and I love love LOVE Rookie, like a whole lot. We’re always talking about how much we want to submit something, but we never know what to do (we’ve created a Google doc to brainstorm tho). Then we were like, “We should totally do a Friend Crush!!” THEN we were thinking, like what if we paired up with Dionisia’s sister, Sienna, and HER best friend Christina, to do a double Friend Crush? Like a Squad Crush?? IDK if that would be cool or totally not cool or even if we could do it, but it would be way cool if we could!! Thank you for reading this, if you do!!!

Tell me about your squad with Dio, Christina, and Sienna. How often do you see each other?

Dio and Sienna are sisters, and they live close to my grandma, and my grandma lives close to my dad. My parents are divorced, so I live half the time with my dad and half the time with my mom. Outside of school, I’ll see them if I’m staying with my dad. Oh, and we were on the golf team together. Dio and Sienna do soccer together—they’re really good. They’re the best soccer players I know. I mean, I don’t know any soccer players, but if I did know a lot, they’d be the best ones.

Do you all go to the same school?

Yes. Since middle school. Sienna and Christina are a year older than [Dio and me], so they’re a grade ahead. Me and Dio are sophomores, and Christina and Sienna are juniors.

What do you do when you hang out outside school?

When they all come over it’s a Superparty. We’re working on Superparty 3.0 right now.

What! I love that name. What do you do?

We play Just Dance on the Kinect, and we eat a lot of food, and talk about how stupid boys are and stuff like that. When we have a sleepover that’s just two or three of us, that’s not a Superparty, it’s half a Superparty. We had Superparty 1.5, where it was just me, Dio, and Sienna.

How did you and Dio meet?

We didn’t really talk in sixth grade, but in seventh grade I joined band, and she was in band, and we both played the flute. We were stand partners. She was so good, and I was not nearly as good. I’d be acting like I was playing.

When did you realize that Dio was your best friend?

I would say probably last year when we started high school. That was when we were like, “OK, this is for real.” But more recently, I think maybe six months ago, when I came out to her and she was super cool.

I was crying! I was crying so hard. I was like, “Please, don’t hate me!” I don’t know why I thought she would. I guess it’s weird every time you [come out], you never know how it’s gonna end up. So I was crying, and she was like, “Don’t cry,” so that was cool.

What qualities does Dio have that you wish you had?

When she gets mad at someone she, like, doesn’t blow her top. We had this thing with this one boy in feminist club who said we were being racist by talking about Ferguson, and she was, like, not getting angry. She was angry about it, but she was able to talk about it and say actual things. But when I get really mad, either I start crying, or I start talking and it doesn’t make sense. So I would like to be like her in how she is when she’s mad. Also, I’m kinda envious about how good she and Sienna are at soccer.

Does the fact that Dio and Sienna are sisters affect your friendship as a group?

They get along pretty well. Two weekends ago I was [at their house] and Dio had a soccer game but she didn’t want to go because she wanted to hang out with me, and then Sienna got mad at her, and was like “You need to commit!” I was like “Woah.” She like, ran past the door and was like “I hate you!” and I was like “Oh, no, no, no, no, NO!” But I don’t think they fight a lot.

Christina is super cool. We first met when we saw Vampire Weekend two years ago. She is Sienna’s best friend, and that’s the first time we all, as a squad, came together and did something. Me and Dio were talking about Vampire Weekend in eighth grade in band, and she was like, “You like Vampire Weekend, so do you wanna go to the concert with [me, Sienna, and Christina]?” So we met up at Dio’s house, and then Dio’s mom drove us all over. That was my first concert ever. How lucky to have your first concert be your favorite band? It was super awesome.

Does the squad hang out at school?

On Mondays, we all go to film club usually, but it’s mainly just me and Dio, and then maybe Christina and Sienna. On Tuesdays at lunch there’s feminist club—that’s the one we all go to—and then on Fridays there’s Queer-Straight Alliance. [For QSA], I had a presentation which was about how to be a better ally, and I was like, “You guys should come see my presentation because I’m doin’ it.” And they were like “All right, cool,” and that’s where I ended up coming out to Christina and Sienna, though I doubt Dio kept it from Sienna. But that was just like, “Just so y’all know!”

And they’ve been supportive? 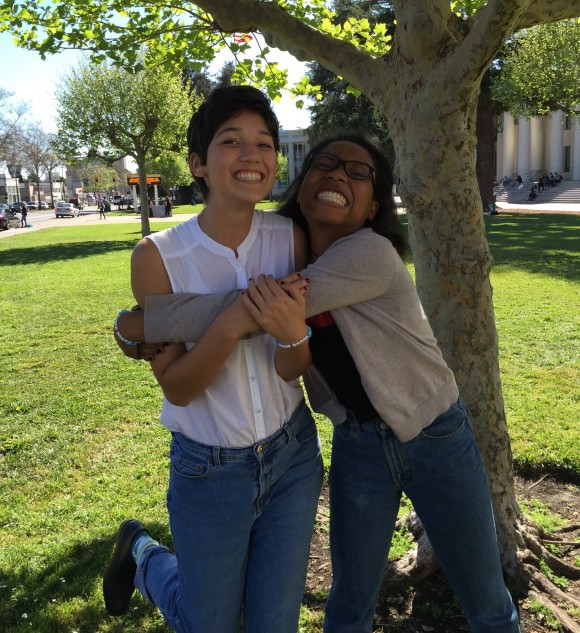 Tell me about the Superparties.

Me and Camille always wanna have sleepovers, but then I’ll be like “Can Sienna come?” And then she’ll say, “Let’s invite Christina, too!” And that’s, like, THE squad. So we’ll all go over to Camille’s house. By nature, our squad is already so close because me and Sienna are sisters, and then Sienna and Christina are best friends, and me and Camille are best friends. So when me and Sienna are together, basically everyone else is together, too.

Do you ever worry that if you and Sienna are fighting, you’ll change the squad dynamic?

I wouldn’t say that Sienna and I fight. The extent of our fighting is getting annoyed at each other for maybe, like, two days max. Christina’s very cool about it. She won’t be like, “You did something to Sienna, so I hate you!” or anything like that. She’s funny all the time, and happy all the time. You know, it’s all pretty cool.

Camille was so excited to talk about the Vampire Weekend concert.

Did she tell you that our “song” is by Vampire Weekend? “I Think Ur a Contra”—that’s our song. And plus the whole album Contra, all their albums, they’re so cool. We love them. She loves Ezra. She LOVES Ezra a lot.

Why is that your song?

I remember on a bus ride [home from a band trip] one time we were listening to Contra together, but I don’t know how it became that song. Because of that, though, whenever I listen to that album, I always feel like it’s a summer day, and it’s really hot, and I’m hanging out with Camille. Basically, that’s in my mind forever.

Camille was saying that when she came out to you, it was a really good conversation. What was it like from your perspective?

And then you joined Queer-Straight Alliance?

How is it going?

It’s really fun. It’s a super close-knit group of people, too. They’re all fun, and funny. A lot of Camille’s other friends are there, too, so it’s cool. I’m definitely learning, and it’s so good to go, because I mean—I don’t even know why I didn’t go before.

Nice. What qualities do Camille, Sienna, and Christina have that you admire, or that you wish you had?

Camille, I-wish-I-had-slash-I-admire how outgoing she is. She has so many friends. She can effortlessly be funny to an entire room of people, which is like WOAH, because I just can’t do that the way she does. And she can relate to so many different types of people.

Christina, she’s just so cool! Like, all the time! So funny and so happy, literally, she has such a good sense of humor about everything and everything is funnier when we’re with her. [Laughs] Even in the way she’s mean—she’s funny and nice about it. Sienna says that Christina is always happy, and that when she isn’t she gets sad because “Christina is sad, and this never happens, the world is ending!”

And then Sienna—it would be how hard she works, and how determined she is. But also how, like, emotionally invested she is in things. In soccer, in school, and everything—she works so hard, and it’s super admirable. I slack off sometimes and feel like I can’t keep a goal in mind, or that I don’t want to work hard all the time. With her, it’s like 100 percent in everything. I dunno, it’s really admirable.