Before you choose a college, test its “sexual culture.” 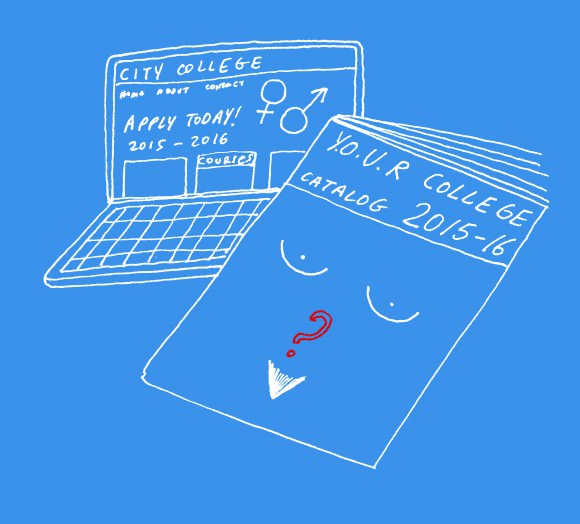 Congratulations, college-bound person! You’ve worked and you’ve worried and you’ve waited, and now you have an awesome problem in front of you: deciding which school to go to. It’s been more than a few years since I was in your shoes, but I remember the feeling clearly. Like everything was possible, but also like the course of my whole life depended on this one decision. (It doesn’t actually, I swear.)

I weighed a lot of factors while making my choice about colleges, like how big they were, what majors were available, how much financial aid each offered, and what the social scene would be like for a do-gooder theater geek like me. But one thing I never considered was what kind of influence the school’s administrators, staff, faculty, and student body could have on the way I experienced my sexuality. I never once thought about what kind of sexual culture I wanted to spend the next years of my life in.

It’s not like I wasn’t having sex. I’d been fooling around with boys in one way or another since I was about 14 years old. I thought about sex all the time, and had it as often as I could manage. It just never occurred to me that a school’s policy and student culture could make a big difference in the way I would experience my body while on campus. I didn’t think there was anything to choose about a sexual culture. I’d only ever known the one I grew up in.

But it did matter, and in ways I wouldn’t have even predicted. When I picked a small liberal arts school, with the emphasis on “liberal,” I had never even thought to question my heterosexuality. By the time I graduated, I was in love with my second girlfriend. I lucked out on that front, as I was on one of the most queer-friendly campuses I could have been on at the time.

I was the opposite of lucky when another student tried to rape me. Fighting back against the school’s failure to protect me and other survivors of sexual assault gave me my first taste of activist victory, but I’d gladly have traded in the organizing lesson for humane treatment by the campus higher-ups.

Below is an incomplete list of factors that may influence how you’ll experience being a sexual person (or choosing not to be sexual) on any given campus. It’s a long list, and it raises a lot of questions. We’ll talk about who to ask later, but for now focus on the stuff that seems like it would be most important to you.

1. Official policies or practices at a college that influence its sexual culture

First, the easy stuff. Some of the things you may want to know about what’s going on with a campus, the school has to tell you, like:

You can find some of this info on a school’s website, but for anything you can’t find there, call the admissions office. It’s their job to convince you to come, so they should be willing to track down answers for you if they don’t already know them.

If you’re concerned about how a school handles sexual violence, check the number of “sex offenses” it reports to the Department of Education each year, and whether the school is under investigation by the DOE for violations of Title IX or the Clery Act. Something to keep in mind is this: If a university’s administration acts as though sexual assault is not a problem—that’s a problem. Campus sexual assault statistics vary from study to study, but there is sexual assault, and attempted sexual assault, on every single college campus. You want to go to one where students feel safe reporting it and the administration is openly, actively trying to prevent and prosecute it. A school that says that rape isn’t a problem is a school that is sweeping it under the rug.

2. Unofficial practices at a college that influence its sexual culture

There are also plenty of things that a school does to influence the sexual culture on its campus that you won’t find on any website or brochure. For example, students at one Catholic university told me that they can’t get condoms on campus, but they’re given a pregnancy test every time they go to the health center for anything, even just a cold. Here are some things to think about:

If most colleges don’t talk about or advertise this stuff, where, other than Google, are you going to find answers to these questions? Here’s my secret for finding out things a school may not want to tell you: students. There are several ways to find students who’ll dish about their schools, including chatting people up if you have a chance to visit a campus in person, and looking for school-related groups on Facebook. But my personal favorite way is to go to a school’s website, and find the list of all the student groups on campus. (Usually it’s under the site’s “campus life” section.) There, you’ll often find the contact info for groups of students who already care about this stuff, like feminist or womanist groups, LGBTQ groups, student sex educators—you get the idea. And if there aren’t any groups like that—that could be a red flag, right there.

Once you’ve found a student who likely shares some of your interests, just tell them your deal: You’re trying to decide which college to go to, and you were hoping they could answer a few questions. Most college students want to make sure that other great people go there, and will be happy to help. Ask them to compare their experiences with the sexual culture with their friends’ experiences on other campuses, rather than against a perfect world. Every place has issues! You want to find the best combination for you, not hold out for nirvana. Now that you’ve found this person, you can also ask about…

3. Parts of a college’s student culture that influence its sexual culture

Of course, the higher-ups aren’t in full control of students’ sexual experiences on any campus, so be sure to check out how students tend to act when left to their own devices, too. Regardless of a college’s enrollment, it can be hard to opt out of the dominant social scene, whether the tone is set by fraternities and sororities, or the lacrosse team, or art department, or whomever. It helps to ask students at that school:

There’s no perfect college, and there’s no way to perfectly test the culture and safety of a college. You can investigate every one of these questions or none of them—either way, if someone assaults or harasses you, or if you wind up otherwise harmed by school policy or practices on campus, it’s not your fault. The point isn’t for you to take responsibility for stuff the school or your fellow students do. But you can choose between schools based (in part) on what your sexual culture dealbreakers are. This decision may not change your whole life, but odds are you’ve never before had this much control of what kind of community you want to live in. You deserve a place that’s going to support you as you figure out what you want to make of this new chapter of your life—including your sex life. ♦

Jaclyn Friedman is a professional troublemaker. She’s the author of What You Really Really Want: The Smart Girl’s Shame-Free Guide to Sex and Safety, among other things, and host of the podcast Fucking While Feminist.