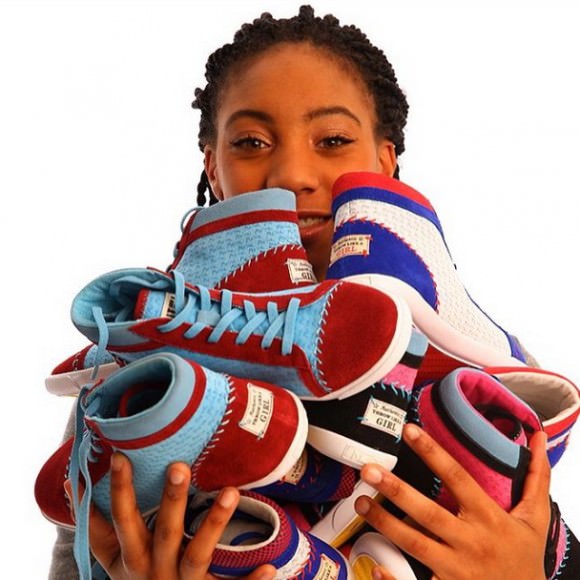 Mo’ne Davis with her new sneaker collection, via Instagram.

Baseball season kicks off in a matter days, and Mo’ne Davis, the teenage Little League star, is back in a big way. First of all, the Disney channel is making a movie based on Mo’ne Davis’ life which will be called Throw Like Mo. This news coincides with the release of her memoir, titled Mo’ne Davis: Remember My Name. Hallelujah-hands emoji! In equally exciting news, Mo’ne has teamed up with M4D3 (Make A Difference Everyday) to design a line of sneakers. A portion of the proceeds from sneaker sales will be donated to the Because I Am a Girl initiative, which only adds to the awesomeness of this new collaboration. In case you don’t know her super-impressive baseball stats: Mo’ne is the first female pitcher to throw a shutout in a Little League World Series game, and only the sixth female player (ever!) to get a hit in the tournament’s 67-year history. This is Mo’ne’s world, you guys, and I’m happy to be living in it.
Derica

This week, Michelle Obama traveled to Japan where she gave a golden speech about a new initiative called Let Girls Learn. Obviously, we agree with the sentiment—girls should be allowed to learn—but there’s more. The initiative is a partnership between the U.S. and Japan which aims to “help girls across the world go to and stay in school.” There’s already some buzz about Let Girls Learn, and this quick and to-the-point Q&A with the First Lady on the Skimm explains that U.S. Peace Corps volunteers will work with individual communities who are running projects that support girls education—like, say leadership camps—to make girls’ lives a little easier.

The speech in the video above gets even golden-er (OK, not a word, but you get my meaning) around the three-minute mark, when Obama gets really frank and says that these challenges to girls’ education don’t only exist in the developing world. She segues seamlessly into a moving description of her own upbringing: how she was “primarily defined” by her “relationship to the men” in her life and teachers’ low expectations of “a girl from a humble background” like hers almost squashed her big dreams. Thankfully, she was still MICHELLE OBAMA, and it’s rad to watch her empower others globally to help make sure they get to live their own big dreams. Listen above, and read up!
Estelle

I grew up in the southern hemisphere, so the Aurora Borealis, or Northern Lights, seemed both impossibly beautiful and, well, impossible for me to see. Usually, you can only see these gorgeous natural lights—which appear when solar-charged particles collide with gases in the earth’s atmosphere—in the northern hemisphere. On Wednesday, a huge solar storm created a starry lightshow that people could see in both hemispheres, and there are a bunch of amazing photos showing what the sky looked like in Australia and New Zealand. So pretty!
Meagan

Image via NASA, via the BBC.

In other celestial news: Our beloved planet experienced a rare solar eclipse this week. A solar eclipse happens when the moon’s orbit crosses into the path between the sun and the Earth. The day shutters briefly into eerie twilight until the moon gets out of the way, or completes its orbit. The eclipse was livestreamed and recorded from islands in the Atlantic Ocean, and you can watch it on TIME magazine. A tip for all you witchybabes: The eclipse coincided with Spring Equinox (aka the first day of spring), which makes this a great weekend to harness the power of the skies and SPREAD THE MYSTICAL LOVE!
Nova 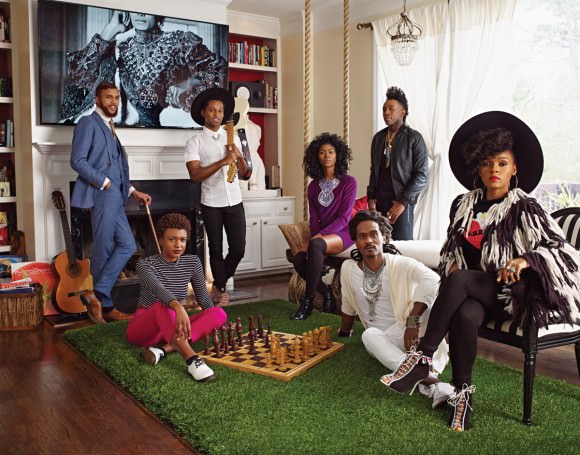 Photo of Janelle Monae by Harold Daniels, via Adweek.

The singer-songwriter, and producer Janelle Monáe is making some serious music mogul moves. The Electric Lady of honey-smooth vocals and amazing tuxedo game, has established Wondaland Records, a record label and “movement” that positions Janelle Monáe as a music industry leader. What excites me about this story is the emphasis she places on opening up spaces to allow unique, thought-provoking artistry. She adds: “having fun and being whimsical and free is important, and I’ve always believed I can accomplish anything I want while also inspiring young girls and pushing for change around the world.” Go, Jane! 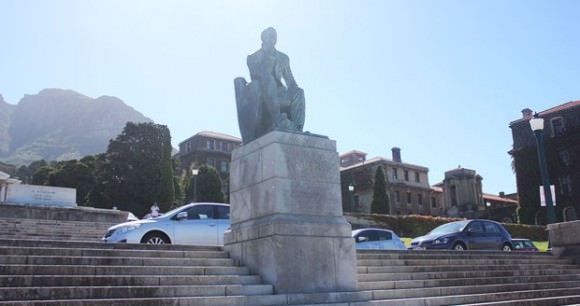 Photo of the statue of Cecil Rhodes at the University of Cape Town, via the Daily Vox.

The hashtags #RhodesMustFall and #RhodesSoWhite have been trending this week on South African Twitter. The Rhodes up for discussion is Cecil John Rhodes, the British colonialist who had some seriously racist views about Africans, and whose legacy is preserved across South African universities in the form of prominent statues. Students at Rhodes University and the University of Cape Town (UCT), are using protest to draw attention to how his racist legacy continues to shape the culture and the hiring and admissions practices at both universities. Protesters made a case for why the statues of Rhodes should be removed from campus. As the student activist Ramabina Mahapa said in an interview with the Guardian, “We, as black students, as African students, need to be able to identify with the institution. Whose heritage are we preserving?”

In solidarity with students in South Africa, Ntokozo Sboh Qwabe a student at Oxford University in the UK, is calling for a statue of Rhodes to be removed from an Oxford college: “There is no space for symbols of oppression and domination within the gates of learning.” I agree, and I seriously commend these students for standing up!
Lucy 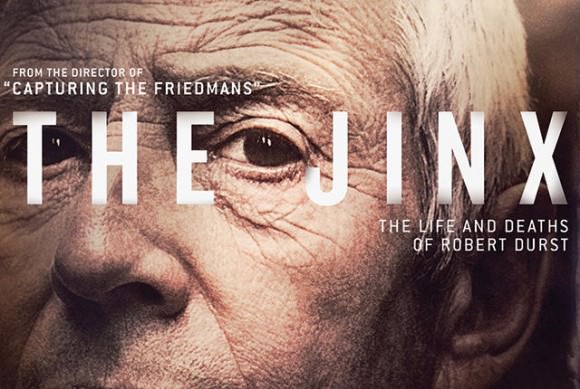 The Jinx series poster, via HBO.

If you’re not already watching, then maybe you’ve heard the hype about The Jinx, a miniseries about the life of the alleged serial killer Robert Durst. The finale of The Jinx aired Sunday night on HBO and coincided with Durst’s arrest for murder. I won’t give too much away, but the stranger-than-fiction story and the timing of his arrest made the whole series feel less like television and more like a legendary event. Now, avoid the spoilers, and HBO Go, my pretties! 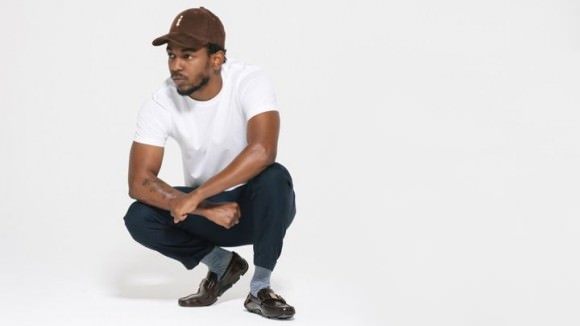 Kendrick Lamar’s new album, To Pimp a Butterfly, came out on the March 16 and it does not disappoint, It’s intense and elegiac, and the album seems to express some of the joy and deep sorrow of being black in America this past year. I didn’t expect anything less.
Stephanie 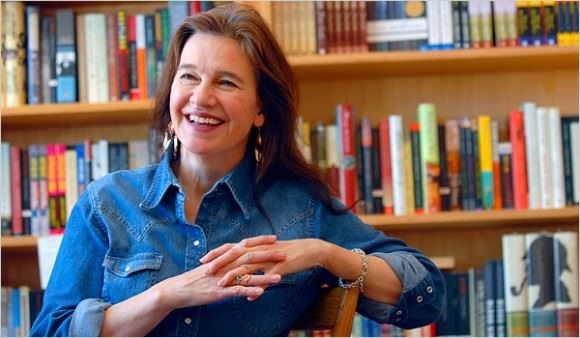 Photo of Louise Erdrich via the New York Times.

I cheered aloud when I read that the writer Louise Erdrich won the Library of Congress Prize for American Fiction. She was chosen by James Billington, the Librarian of Congress who described her prose as “at once lyrical and gritty, magical yet unsentimental, connecting a dreamworld of Ojibwe legend to stark realities of the modern-day.” If you haven’t read any of her books, I highly recommend Love Medicine, which is a total masterpiece of interlinked stories.
Chanel 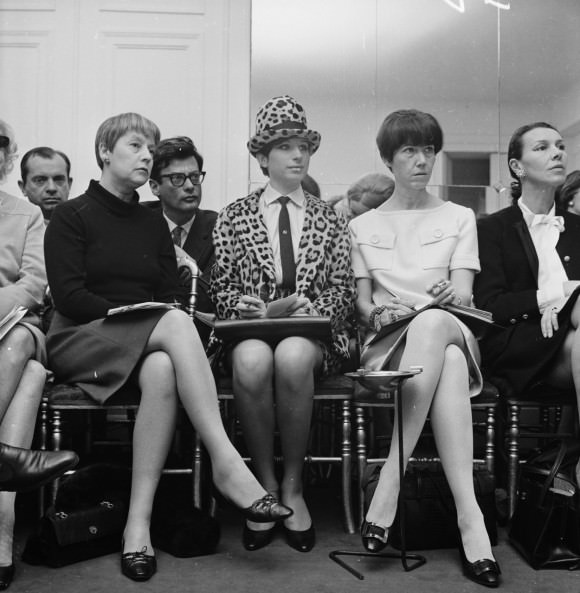 A story in i-D magazine provided a history of who has filled the front row seats at fashion shows. According to the article, in the early aughts, front rows were reserved for loved ones and industry insiders. The piece explores why the demographic of the front row has changed over the years. There’s maybe a hint of “it was better in the olden days” in here, but it makes some pretty interesting links between the front row (frow) and our culture more broadly. 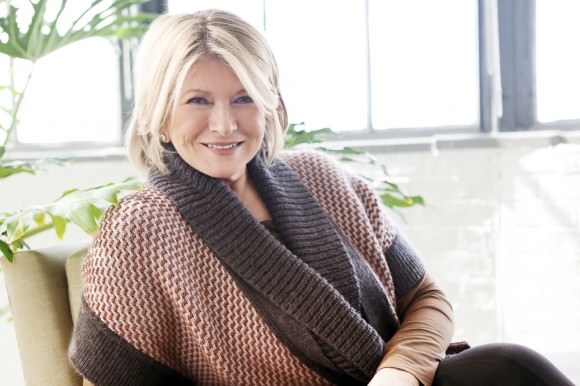 Photo of Martha Stewart by Emily Weiss, via Into the Gloss.

Martha Stewart was featured on the Into The Gloss, and she waxed some serious poetic on beauty. But, because it’s Martha, she also provided an extra lesson on owning the ish out of your own ideas: “I think, even when you’re busy, that you should always continue to learn as much as you can about business and dealing with people. That’s very important—and try to stay as passionate as you can about your good idea. Be excited about what you’re doing.” So, the next time you’re putting yourself down, remember the time you read this piece and Martha told you to believe in yourself. ♦