An argument in favor of speaking up in class (even when it freaks you out).

How to Trust Your Brain 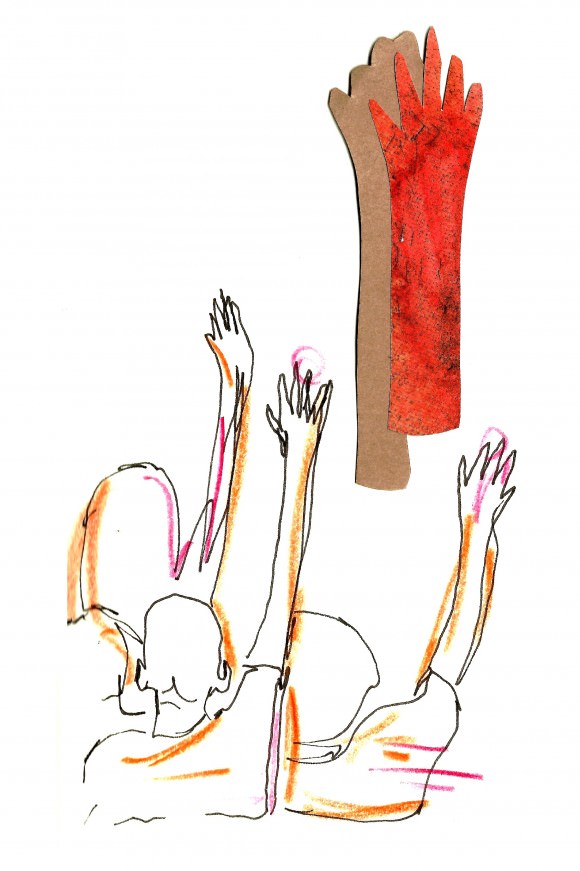 In schools across the world, you’ll find an incredible genus of student who posses the enviable ability to participate in classroom discussion, seemingly without any hesitation. When prompted by a teacher, they coolly offer up their thoughts on topics as diverse as 19th century European imperialism and what the green light symbolizes in The Great Gatsby. They actually volunteer to conjugate irregular verbs, their voices never quiver or shake when asked to read aloud, and they walk up to the board to solve algebra equations with the quickness and fearless determination of Kanye West rushing an awards show stage in the name of Beyoncé.

Witnessing one of these people in action is beautiful and intimidating. But these students aren’t impressive because they’re more intelligent than anyone else—though, obviously they often are quite smart. They’re impressive because they are undaunted—they don’t have any hang ups about speaking up and stating their opinions or asking questions. It’s bold—sitting there in class just gabbing about valence electrons or delivering some pithy analysis of Antigone while 30 or so pairs of eyeballs stare, totally prepared to judge. But I’m almost positive that people who are capable of speaking up don’t see it as boldness at all. It’s whatever for them, you know? They’re simply talking, ostensibly with the same freeness, ease, and assuredness that most of us have when chatting with friends or discussing extracurricular passions.

Slouched in whatever inconspicuous corner of the classroom that I’d strategically chosen, I watched with a mix of reverence and resentment as these folks performed their magic, thinking, How the hell do they do that? Why can’t I do it? Even the kids who talked way too much and clearly just loved hearing the sound of their own voices were amazing, in a way—I admired their confidence, despite the fact that I found them deeply obnoxious.

The idea of answering or asking a question in class, or even participating in discussion, was fraught with the potential for complete humiliation. All through each lecture, I was fine, enthusiastically taking notes, loving life and learning and school. But as soon as my professor started trying to facilitate a discussion, and especially if she started calling on people who weren’t raising their hands, all my happy, fantastic “I love school” vibes would instantly evaporate and become replaced with very real and oppressive heaviness in my chest. The skin on my neck felt tighter and my stomach would alternate between doing pirouettes and droppin’ it like it was hot.

It was kind of like that roller coaster sensation where you have all of that anticipatory fear when you’re at the peak, and then your guts just plunge as the car plummets. Except, in this case, it happened over and over and over again for like 30 or 40 minutes, and it wasn’t at all fun because there was an expectation, that, at some point, while all of this madness was going on, I was going to have to talk about 18th century trade embargoes or the Peloponnesian War.

What was the problem? Why was I so nervous? Why couldn’t I just chill? The simplest answer is that I was scared of sounding or being perceived as stupid. Or, actually, not even stupid. I was afraid that people wouldn’t think that I was super smart. I wanted to not only give the correct answer, but also say something totally insightful every time I spoke, which, looking back, was an outrageous goal. (Surely, even noted brainy people, like Neil deGrasse Tyson, sometimes say things that are only very insightful.) I was told that I was a smart kid by teachers and family from the time I was in preschool, which of course felt good, but eventually started to stress me out. I felt expected to be that smart kid ALL THE TIME, and that thought was a burden that tied my stomach in knots and kept me silent during class.

My apprehensions grew when I got to college. Everyone who contributed to discussions in that overwhelming new setting seemed so articulate, so adult. They liberally sprinkled words like “paradigm” into their comments, while I still very much felt like the insecure teenager that I was. We were graded, in part, on participation, and sometimes the teaching assistant would very overtly mark down in a little notebook whether or not students said anything during class, so there was added pressure and weight to the discussion. My sophomore year, I took an introductory American literature course where we had to read The Crying of Lot 49 by Thomas Pynchon. Apparently it isn’t as impenetrable as some of the author’s other works, but still, that ain’t no beach read, OK? In class, there was a very lively discussion about symbolism and postmodernism that I wouldn’t have been able to participate in even if I’d wanted to, because I just didn’t understand what the hell was going on in the book…or what postmodern even meant (I still sort of don’t, but shhhh…). So what I did—and this is something that, as an academic overachiever, I did for most of my classes—was re-read the assignment, take notes on what I’d read, study those notes, and read some unassigned scholarly analysis of the subject. Even with that much preparation and even with the knowledge that, Hey, I was accepted into this school, so obviously someone believed that I could thrive in this environment, I was still uneasy about speaking up in class.