A video premiere, plus several arguments for making a mess. 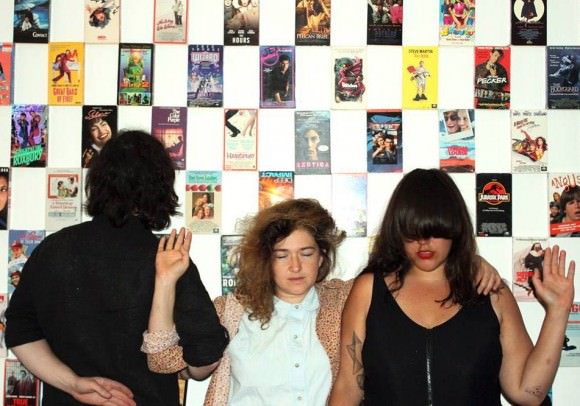 New Fries is a new name for New Fries, a Toronto-based no wave trio so enamored with improvisation that they used to call themselves something different each time they played one of their cathartic, cacophonic shows. The band is comprised of Jenny Gitman, Tim Fagan, and Anni Spadafora, who also is a performance artist and the star of the music video for “Water & Water/Plexiglass.” It was directed by Chris Boni, and we are happy to premiere it for you right here:

Last week, I talked to Anni, who sings and plays guitar in the band, and Jenny, who plays drums. It was exciting because I could sense how much they were on the same wavelength. We chatted about their latest album, Fresh Face Forward, the joys of writing simple, “messy” songs that sound only half-done, and the band’s influences (including the B-52’s and J Dilla).

MEAGAN: So, start off by telling me what you do.

JENNY GITMAN: I’m the drummer. That’s all I do!

ANNI SPADAFORA: I play guitar and scream and bark.

Do you write lyrics together, as a band?

ANNI: Mainly [I write them] myself, but lately Jenny and I have been trying to work together. I’m realizing how hard vocals are in this way that I never would have anticipated.

Why do you find it to be difficult?

ANNI: It’s a priority to have vocals that are dynamic. When you’re being punky or screamy, it’s hard to find a balance. It’s really easy just to scream in every song! And lately, we are trying to push the vocals, like, What other sounds can I make with my body? It’s less about finding a vocal melody and more about something that “goes.” The lyrics themselves are a compromise, because you have this idea of what you want to say with only a handful of words. But one thing that feels natural and excites me is repetition. I am totally OK with using one phrase in the entire song.

JENNY: Which is basically what we do!

ANNI: I was thinking of the Deerhoof song “Paradise Girls,” which uses a lot of repetition, but it’s such a fucking good song! So good, and so simple.

What it is about repetition that you find interesting and inspiring?

ANNI: Many of the components of our songs are messy. Sometimes there will be a repeated component, but then it’ll explode. We’ll get a groove going, and then it is lost. We like to give people a rhythm, and then take it away from them.

I read somewhere that you two didn’t used to consider yourselves musicians. It that why you find improvisation so comfortable?

JENNY: [Laughs] That’s definitely it. We have no language for music, really. I haven’t really learned anything new, other than by experimenting.

You guys basically learned your instruments a year ago, just to be in this band, right?

JENNY: It was, like, a total joke, and now it’s super real!

ANNI: It’s super real, and it’s super fun! Improvisation and “feeling it out” are the only ways that we know how to make anything. I don’t know what it’s like for someone who reads music or plays their instruments very well to make music. The way that we do things is like, we play something, it sounds good, and we keep going with that. And we are owning it! It feels fucking awesome.

JENNY: That’s exactly true with all aspects of doing anything: You have to stand up and take ownership of it.

How do you incorporate your influences into the way you write your music?

ANNI: I totally identify with the no wave scene aesthetically, and their spirit of, “Fuck it, do whatever you want to do.” It was a very nihilistic sound. It’s so funny, though—I feel like we all listen to so many different types of music. Even when we drive somewhere to play a show, it surfaces: the kinds of things that we each like quite intimately. Whenever we get on the topic of “What sounds are we inspired to make?” it all comes back to the spirit of things. The other day we were talking about J Dilla’s Donuts, and it’s, like, the fucking best thing. A total barf of ideas, and these one-minute injections of sound.

JENNY: There’s also a spirit of trying to do something that we’ve never done before. Like, trying to do, in our shitty way, a hip-hop beat or a dance song!

ANNI: My favorite moment of us being a band was us watching a video of a B-52’s Saturday Night Live performance. We all had a dance party about it in my bedroom. It was the most frightening and urgent and moving thing that I had seen in a very long time. It shattered my world because it was so simple, and so fun.

Did Anni’s performance art background also encourage the improvisation in the band?

ANNI: I hadn’t really done much performance work before the band, but after we played our first show, something clicked. It lit this weird fire in me, and I don’t what it is or where it came from.

ANNI: Thank you. The band pushes me in a way that sometimes feels really hard, but is very exciting.

JENNY: We have a moment in our last song where it’s just Anni doing this repetitive guitar part. We all stop, and Anni goes hard, forever, intensely. It’s kind of gut-wrenching to watch.

ANNI: In terms of improvisation, there is a push to be sincere and let the wildness in me out. It feels so empowering to be a nut on stage. I want to move my body in a particular way, or hit my guitar in a way that is not graceful, or be aggressive in this way that I want to see other women behave on stage. I’m lucky because [my bandmates] want more of it all the time.

JENNY: People have described [Anni’s performance] as, “screaming like a banshee.” [Laughs]. I watch Anni from the back all the time, and she really commands the show.

ANNI: I get really sweaty and my bangs are really long, so I always end up looking like Marilyn Manson or something.

Which is totally a good look.