“So many young people are getting panic attacks, it’s like a silent plague.”

How to Get Over a Cold By Yourself 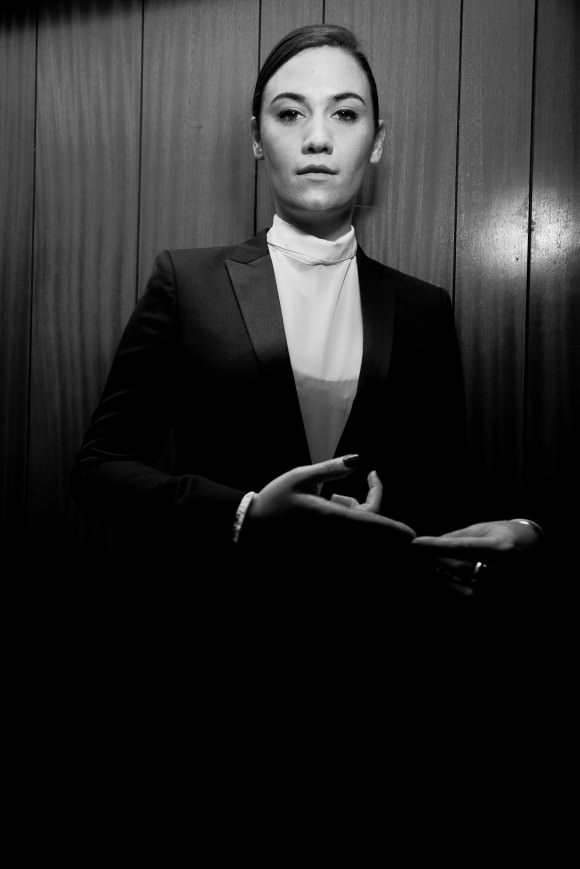 Back in 2013, Nadine Shah released her debut full-length record, Love Your Dum and Mad, and music critics categorized the Newcastle, England–born singer-songwriter as a kind of hybrid of Nick Cave and PJ Harvey. During our first interview with Nadine, she talked about how important it was for her to break free of the influence of other artists. Since then, she’s been experimenting with the “big voice” she was born with. I’m excited to hear how her music has changed on her newest record, Fast Food, which comes out April 7th. In the meantime, Nadine has gifted us all with a premiere of “Big Hands,” her latest track:

Last week, Nadine gave me a chance to pick her brilliant brain about love, loss, anti-Muslim prejudice, and the stigma around anxiety.

SAMMY MAINE: Hey, Nadine! So tell me about “Big Hands.”

NADINE SHAH: The songs on Fast Food are a collection of portraits of people who I have loved, or do love. “Big Hands” is supposed to be a beautiful portrait of somebody that I loved very much—a friend of mine who died two years ago. It is a portrait of him.

Well, he’s not going to hear it! I’m joking, I’m sorry–I have a really dark sense of humor.

I read that your last EP was dedicated to two friends who had suffered mental health issues, and you also talked about your own battle with anxiety. Are those aspects of your life still influencing your songwriting?

The first album was quite political because it was mainly about the death of two ex-boyfriends. And then another ex-boyfriend died not so long ago. I started speaking about the stigma attached to those suffering with mental health illnesses. I still do now: I’m giving a talk [for students] in my hometown, Newcastle, at the end of April. I sometimes go and speak at different conferences concerning mental health, and I work with certain charities.

I mention my anxiety on this album very briefly, on “Stealing Cars,” which is the first single that came out. I’ve got chronic anxiety—it’s such a pain in the bum. I was convinced for ages that I had some sort of heart problem. I had all these rigorous tests for months, and then the doctors turned around to me and said, “No, there’s nothing wrong with your heart, Nadine, you’re anxious.” I was gutted. I was like, “What?! I can’t go and tell my friends I’m anxious—everyone thinks I’ve got a hole in my heart!” I’ve learnt to control it now. I mean, I still get it now and again, but it doesn’t consume me anymore. I had to go on this [Cognitive Behavioral Therapy] course, and then I could pinpoint things that trigger my anxiety. “Stealing Cars” briefly touches on how irrational thoughts can manifest themselves in dreams.

I kind of know where you’re coming from because I’ve started seeing a counselor after having a bunch of panic attacks on the train home. I know it’s happening, but there’s nothing I can do to stop it.

It’s so odd because it’s like, so so many young people are getting panic attacks—it’s like a silent plague. There are so many people that suffer from it, but they don’t talk about it because they’re a bit embarrassed or whatever. Once I started telling people I was getting them, so many of my friends started coming out of the woodwork, saying, “Actually, you know what? I get it as well.” When you’ve had it once, and then when you’re in the same environment again, you can’t help but think it’s going to happen again, and then thinking it’s going to happen again kind of brings it on.

On your last record you drew inspiration from characters from books and films. Is that the same with Fast Food?

This album was pretty much entirely based on personal experience. I find it quite odd though; it’s a lot more revealing. The first album was almost easier to talk about, even though there were difficult subjects about mental health and what have you. But on this album, because it’s all so close to home, and it’s about my own personal experience and my own love life, it’s like hanging out my dirty laundry for everybody to see. None of the songs on this one have really been informed by literature or film.

Are you more nervous about this one coming out then, because it’s so personal?

Oh yeah! It’s always terrifying. I was trying to explain to a friend what it’s like, and it’s so odd. You’re publicly judged—there aren’t many things you do in life where you’re put in that situation. You put yourself in quite a vulnerable place, especially if you’re talking about your own life, and it’s going to be critiqued. It is nerve-wracking. Because the first album did quite well critically, there’s pressure for this one to do the same. You want to sustain your career because if it’s a thing you love doing, you want to maintain it, so there is that worry.

You moved to London when you were super young, right?

That must have been pretty scary.

I mean, I went to London often as a child. My father—he’s from Pakistan—always dreamed of living in London, but he ended up in the Northeast of England. He would visit any chance he had; we’d all go down to London. I was very familiar with the landscape, but it was kind of terrifying. My eldest brother was studying art in London and my parents said I could move there, but only if I lived with my big brother. So I did have a crutch—I wasn’t just thrown in at the deep end. I’m pretty sure they wouldn’t have just let me move down cold-turkey. I love the city. It took me a bit of time to adjust but I soon settled in.

You mentioned that your dad is from Pakistan. Did any part of Pakistani culture shape your household?

Yeah! I mean, I consider myself English. I don’t speak my father’s language and some people will say, “Well, if you don’t speak the language then you’re completely detached from that culture,” but I disagree with that entirely. I love the music of my father’s culture. And loads of my father’s family also live in the Northeast, so I grew up around the Asian community. I’m not religious but my father is. Nowadays, Muslims have to refer to themselves as ‘modern Muslims’ to avoid being pigeonholed as ISIS or something ridiculous, and it’s so silly. We’re very family-orientated, which I think is a very Asian thing—your family unit is your social network. I feel really lucky to have grown up with two cultures. I hated it for a while when I was younger because it wasn’t so cool to be Pakistani where I grew up, and I would lie and say I was Iranian because “Pakistani” just didn’t sound as exotic or glamorous. I would lie all the time, but I wholeheartedly embrace it now.

Are you still very close to your parents?

Yeah! I kind of live in two cities almost: I’m in London half the time, and Newcastle the rest of it. The older my parents get, like, their joy is just seeing their kids. I try and see them as much as I can. It’s the easiest thing to do, to just give them a call or whatever, and it brings them so much happiness and reassurance. They just want to know that I’m all right: It’s nothing really, is it?

Nope, not at all. Hey, let’s talk about the artwork for this record. Do the visuals represent what you’re trying to say on this album? It looks as though your head is cut in half!

I actually didn’t mean for it to be so sinister! I just wanted to portray a sort of femme fatale type character, and I wanted all the artwork on this album to be very coherent. So I wanted three very vivid colors to be present—red, blue, and green—just to keep everything coherent.

I was looking at loads of different artwork and the thing that stood out to me the most were these images from ’70s Italian horror films. That’s where we got the inspiration for the artwork. I didn’t want my face on my first album. So many solo artists have a picture of themselves on their albums, and I didn’t want to do that. Also because I didn’t want my friends—if they ever saw a poster anywhere—to draw on me or whatever. D.M. Stith is a great musician from New York, and also a good friend of mine and a brilliant artist, so I worked with him on the artwork. But yeah, I guess it’s because this album is so much more personal, it kind of made sense to have my face on it. ♦