Pay attention to the signals.

Why Can't I Be You: Katie Garcia 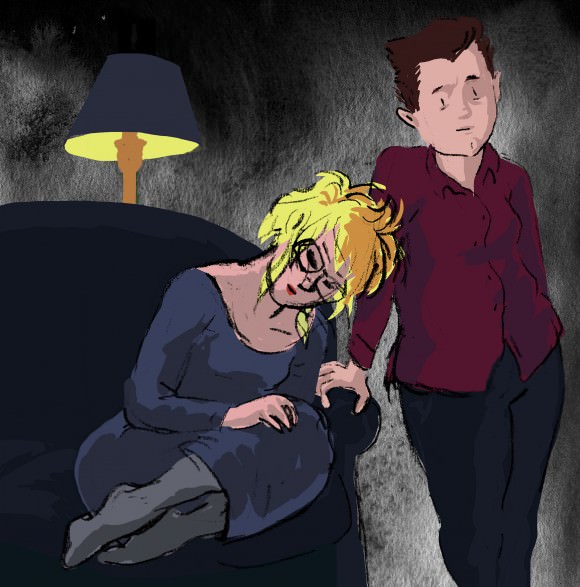 Jane and I walked through the white-walled gallery space, past a flat free-standing lead and glass behemoth, towards a dark alcove with a wooden, rustic pair of doors. Jane moved closer to it, scrunching up her face. I know the feeling: You want to turn away from something that you know you need to see, to understand better how it’s impacted your life.

I squeezed her hand as she looked into the two small knotholes, the light from the other side reflecting on her face.

“Oh my Godddd,” she said, deflating.

I don’t really want to look either, but I do just after she does.

Inside is the Surrealist artist Marcel Duchamp’s last piece, Étant donnés, which he worked on in secret for 20 years. He left instructions for the artwork to be unveiled posthumously, and installed at the Philadelphia Museum of Art, which Jane and I went to during one of their “pay what you wish” nights (which meant I pay a dollar).

When you look through the peephole, you see an illusionistic pastoral scene in three dimensions: dry grass and autumn leaves, a flowing river in the background, painterly-looking trees that look like they come from a 19th century Gilded Age tableau. But dominating the space is a naked woman, her legs outstretched and her vagina facing the viewer, holding a lantern. The side of the peep hole cuts off any view of her head.

There are many readings of the piece, but both Jane and I see it as a scene that happens after a rape.

Jane, a sweet self-described sissy butch girl with a cleft chin and ’50s schoolboy hair, tells me that in college, her art history professor took her class here.

“I told him that I felt weird about it,” Jane said, “Though I didn’t know why. He said, ‘Oh, that’s so interesting…’”

I told her about how my painting teacher in college had shown our class a slide of a painting by Balthus, who became famous for sexualized pictures of pre-teen girls and cats. In between praising the painting, he stopped and said, “Now don’t get me wrong, a lot of people’s lives have been really messed up by this sort of thing.”

“But he still showed it to you,” Jane said.

“Yeah, to a class full of young women.”

“Who were probably all dealing with shit of their own.”

Jane and I walked to a café near the museum. We ate pomme frites.

“Something weird happened today,” I said.

“I wrote the last scene of my comic book this morning. In it, the two protagonists go to a museum and one of them faces this thing that had held traumatic memories for them. One of them offers to hold the other’s hand, and they do. And a change happens.”

“Weird! What do you think it means?”

“Jung says that synchronicity is a harbinger of psychic growth. And I feel that.”

“I pretty much barely distinguish romantic friendships from dating-friendships,” I said to my friend Janice on the phone, as I lounged on the couch and doodled in watercolors. “Like, romance means a lot of different things to me.”

“That makes sense to me,” Janice said in her sandy voice. “One of the most important relationships of my life was with a friend who I wasn’t sexual with, but it felt extremely intimate.”

“Yeah, I feel that all the time. Even just little things, like watching a movie with a friend and you just sit really close to one another and your feet touch a little bit.”

“I’m a very physically affectionate person in friendships, and I always worry about it, because I don’t want to break anyone’s boundaries.”

“I feel like it would make someone uncomfortable if I asked consent about something little like that.”

“I don’t think so. I know for me, I really like to be touch-y with friends, but sometimes it totally freaks me out. When I hang out with people, unless I know them well and we get what each others’ boundaries generally are, I always ask, ‘Can I put my feet on your legs?’ ‘Is it OK if I rustle your hair?’ And just so you know, I’m super happy to be affectionate when we’re hanging out, just ask.”

“That’s OK,” I said, as my voice wavered a little, “Hugs are generally fine.”

“OK… So, with this demarcation for you between dating and friendships, is the distinction for you just sex?” I imagined Janice’s Betty & Veronica looks as she walked through the cramped bodega, phone in hand, and out onto the street.

She laughed and said that she thought about how she felt shocked recently, when she noticed herself behaving “like a friend” around her boyfriend: relaxed and comfortable.

“I have this need to be the Sexy Entertainment. When I realized I wasn’t, I thought, ‘Oh god, I’m not a woman, I’m a person!’ And then I thought, ‘But that’s a good thing!’”

I made patterns and suns in blue with my little plastic travel brush. Making marks. “It’s so weird when you get to that point, where this coping mechanism that used to work has long stopped working, and you’re totally jarred even though you’re moving away this thing that was totally hurting you at that point.”