“I opened up something that I was never going to get to the bottom of.”

Down in the Sand 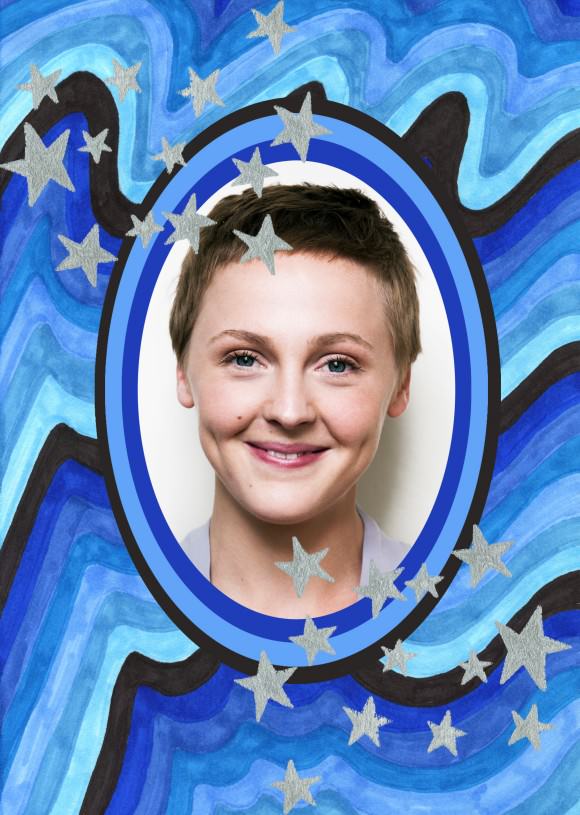 Laura Marling’s new (and fifth!) album, Short Movie, which comes out March 24, is a smart, beautiful meditation on trusting your own intuition. Laura, who turned 25 in February, wrote the record at the tail-end of two and a half years spent living in Los Angeles, where she stopped playing music for six months, shook off the responsibilities she had assumed since starting her musical career in London at 16, and reclaimed teenage experiences she felt she had missed out on. Which makes the perspective of lines like this, from “How Can I,” all the more powerful: “I’m taking more risks now / I’m stepping out of line / I put up my fists now until I get what’s mine.”

Laura lives back in London now, but she was briefly back in L.A., on her way to the South by Southwest music festival in Austin, Texas, when we spoke over Skype. We chatted about what it’s like to be an over-thinker who seeks out unpredictable situations, why coming up against resistance can be a good thing, and how to conquer trivialization by being the best you can possibly be.

LAURA SNAPES: Have you played at South by Southwest before?

You turned 25 at the start of February—have you felt the makings of a quarter-life crisis?

I had it last year, yeah. Time’s starting to move quite quickly all of a sudden. You start understanding everybody else’s neuroses.

What form did your quarter-life crisis take? Was it while you were in L.A., away from music?

I had the existential part of my quarter-life crisis in L.A., the transcendental crisis. Then when I got back to London, and in the lead-up to my 25th birthday, I had the more personal one. I was suddenly aware that all my friends I went to school with and everything—there’s no one at uni, everybody’s doing their job. It’s the great equalizer, the mid-twenties. It’s really weird!

People have always written about your age. Did you ever worry that you’d be perceived as amazing for a young person, but that the fascination would plateau when you became an adult?

That crossed my mind, preemptively, a lot when people were saying it when I was young. I tried to discourage people from saying that, so it didn’t seem so much of a shock when I was just an adult and that wasn’t an interesting subject about me any more.

I was reading some of your earliest interviews earlier, and it’s like you’re described as a magical, beautiful bird, like the journalists can’t remember that they were living, autonomous beings when they were 16, 17.

Right! I definitely had a sense of that. I felt very real and alive when I was a teenager, and I didn’t feel like I was treated as such.

You often hear people who were child stars talking about how they were expected to handle an adult workload but still treated like kids when it came to their own agency. Was that your experience?

To some extent, my last two years have been the reclaiming of my teenagehood because I willingly jumped in and adopted quite a responsible adult position. I always felt I was responsible for my own dealings. So no, it was more like I felt like I had to reclaim some experiences that I didn’t get to have, or let go of some responsibility for a while so that I could have that freedom.

What kind of things, when you talk about reclamation?

When I moved to L.A., or maybe even before that, I decided to release the band for a while because that’s a fairly heavy responsibility—I was employing a small fleet of people, and so I had to manage that and make sure that everybody knew what was going on there. I was free of that responsibility for a while, and then I didn’t really settle anywhere in L.A.. I sofa-surfed and traveled for the first eight months that I was there, and that was kind of freeing and very uncomfortable for me because I don’t like asking people for favors. And then sort of, like, trying to experience what I imagine people experienced in their late teenage years. I’d never been to a club, or like [Laughs]…I don’t know, I’d never gone to bars just for the fun of going to bars, I’d only ended up in bars after shows because that’s the only thing that’s open. I haphazardly went through all that stuff, but in a weird way.

Did enjoy going to clubs?

Yeah, I did! I mean, I did, but [Laughs]…I don’t know what that means, even. I just watched everybody. I felt very disconnected from what that experience was, I still don’t really understand what…Sometimes I think if I could just let go a bit, I would have got it a bit more, but I feel a real darkness in those places that I can’t shake. I decided that that was probably not something that I needed to pursue or understand, really.

It’s interesting—on one hand you talk about stopping yourself from being able to enjoy that kind of situation because you’re thinking about it too much, but then on the other you’ll throw yourself open to the whims of the world and couchsurf with strangers. How do you balance those two things?

I have quite a strong will, or a strong intuition for what I find stimulating. And what traveling by myself for a long time did—the more and more I traveled the further and further out of popular culture I found myself. I didn’t know what was going on in the world, really. I wasn’t reading the news, didn’t have a TV, wouldn’t listen to the radio much. And that opened up a space for me to actually figure out what stuff I really do like, and what experiences I really did want to find myself in. And so there was a lot of stuff that was clearly gonna be an experience that I couldn’t turn down, like…I don’t know, it’s almost crass for me to list it, but the cumulative experience of being on the outside of what was going on in the world was my most formative one. It allowed me to understand myself as an individual, and as part of a huge, huge world.

Were you satisfied with your exploration?

No, I don’t think I was. It felt, like, dangerous. Some of the experiences felt like I’d opened up something that I was never going to get to the bottom of. I’ve struggled always with this idea that each experience in life is somehow a further loss of innocence. A lot of life is really dark, and the satisfaction that I got in conclusion to all of those experiences is that satisfaction is only momentary, and experience is anticipation. And then if you’re someone like me, there’s a lot of reflection after that, which can be satisfying, but ultimately life keeps moving on, and you can either see it as a slow decay or as, like, one long rebirth. And my time in Los Angeles—my sort of second adolescence—was my breakdown of ego, my ego-death or something. I fragmented for a while, and then was able to regain a sense of vulnerability, which can be confused with innocence. And I now place a lot of importance on protecting that vulnerability.

When you talk about life as a period of slow decay, are you concerned with creating something permanent?

Yeah, I have to remind myself to do that. That’s a skill. I’m the type of person who can get very lost and involved in myself, about stuff going on in my universe and who I am and blah blah, or I can go way in the other extreme and become really impersonal about things and about the state of the world, the universe, or the country, or whatever. In the middle of that is what my purpose is on the planet, and each of my experiences in life, whether they’re difficult or pleasant, I do feel contributes to this ongoing conversation about what it is to be human that I get to have with lots of people because of the job that I do, and that ultimately feels like my driving force rather than being a musician—being a part of a conversation about what the fuck’s going on? [Laughs]

Tell me about that conversation.

I met a lot of people here [in L.A.] who were creative with no compensation—you know, they just had to be expressive, or they had to talk about what it was to be human, somehow, either through visual art or poetry or music or even in the way that they dress or whatever. I think coming from London, I was surprised that there was a little bit of me that was like, “If it’s not a success for you, then why are you still doing it?” What America opened up for me, which I’m eternally grateful for, is the true idea of satisfaction. I had never experienced it—people who so passionately needed and wanted to express what it is to be human—because of the circumstances in which I found myself in my life in London.

I began to realize that my dissatisfaction—which began to creep up on me while I was living in London and was fairly lost and dark—was that I didn’t feel like you could have a conversation with someone about the nature of humanity. Either it was political, or it was vain, or self-indulgent, or you’d be confronted by a certain level of cynicism, to talk openly about the vulnerability of humanity, which inevitably becomes a poetic conversation to some extent. Having lived in Los Angeles, where you can do that with the guy who’s serving you coffee every morning ’cos they’re just up for it all the time, I realized it wasn’t London that was not allowing me to have that conversation: It was me.
There are plenty of people, especially now that we’re moving into the fastest technological time in existence and we’re all starting to feel so disconnected, who are desperate to have that conversation. And it’s been fantastic.